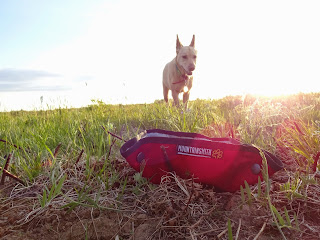 We've been doing a lot of low key outings lately and Mountainsmith's K9 Backbowl, sent to us by Backcountry K-9, has been accompanying us for testing.

It's a pretty neat idea: a flat square of material - tough nylon exterior and waterproof PEVA lining - that folds as many ways as you would ever need to be a handy that serves as a versatile, on-the-go bowl. 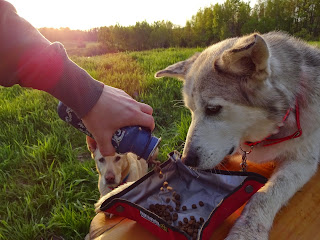 We have used collapsible bowls for years; they're easy to pop up, squish down, and they take a beating.  The Backbowl has one up on these: it's compact.  I can fit it anywhere - Ty's streamline Single Trak, my cargo pant pocket, or the side pocket of my pack. (Which also eliminates the damp, drool-covered bowl in my pack dilemma.) 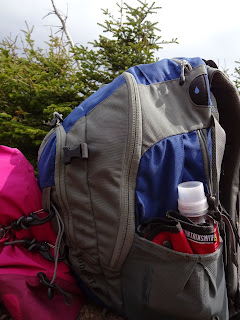 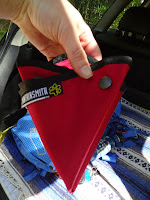 Never again do I need to take my pack off, undo the clips, find the stuff sack, fetch the bowl, then reverse order solely to offer the dogs a drink (that they'll likely refuse anyway).  A little melodramatic but, seriously, how many of us bemoan a simple task because we just don't want to expend the effort to take off our pack?!  Now I just reach around and snag the water bottle and Backbowl, no pack removal involved. 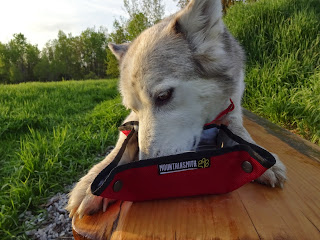 We've been using the Backbowl as much as we can to replicate extended use.  I had to wonder how durable such a lightweight liner could be - will it stand up to all the rolling and folding it is bound to endure or will it wear along the creases?  As we hiked, my husband folded and unfolded it, over and over, treating it like origami paper.  It continued to look (and function) brand new.  I suppose that would be considered breaking it in.  Over the long weekend, we knocked a couple four thousand footers off Linda and Nate's list and that poor Backbowl was crammed, jammed, and squished unceremoniously into the side pocket enough times to prove its durability. 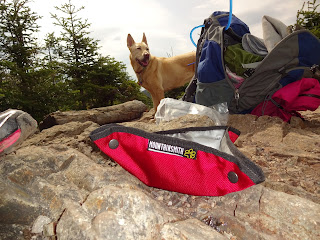 There are some miscellaneous reasons I'm impressed with this bowl as well.  The base is broader than the walls are tall, making for a great communal bowl.  It's lighter than the silicone bowls we have been using and I really need to trim weight off my pack!  Its lack of rigidity means I can balance it nearly anywhere without it tipping over.  Finally, when laid out, it dries quickly.  All-in-all it's a very handy bowl to have in the pack or car. 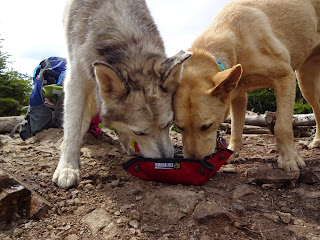 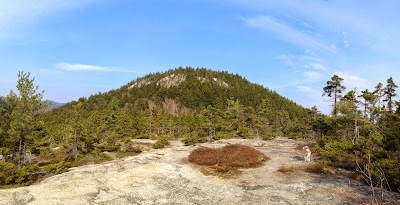 Yesterday, with the temperature forecasted to be significantly higher than our last hike but knowing there was still icy, muddy, mushy, postholed conditions further north and knowing longer excursions were in the future, I settled on Hedgehog Mountain. It begins on the Downes Brook Trailhead on the Kanc and just a short drive further than the popular trailheads for Chocorua and Passaconaway (coming from the east).  The whole day, I both grinned and griped at the change in seasons – attire changed to shorts, a tank, and trail runners but it was hard watching Tango adjust to the increasing heat, making me even more satisfied with my decision for a very early, shorter hike. 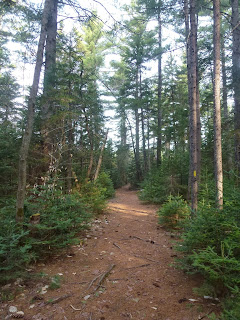 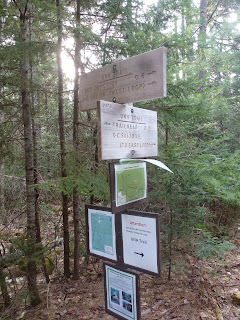 The trail begins smooth, flat, and welcoming.  There are a few herd paths crisscrossing it but the main trail is easy to follow and well signed.  Stick with the UNH loop as you pass a couple of junctions (one pretty much at the parking lot). After the second junction, the trail progresses very gently uphill with good footing.  We passed what was once a clearing and now the trees are starting to grow back.  From the looks of the swath that crossed the trail, my guess is it was cut for logging.  There’s a nice view there but I am glad to see it is returning to its natural state. 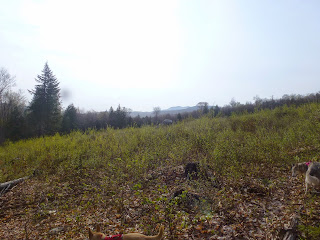 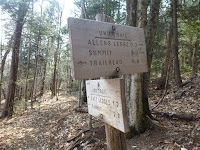 At the junction for the loop, we went clockwise to hit the East Ledges first.  I had skimmed the trail descriptions online, such as Hike New England's but it had been awhile; mostly I chose that direction because the summit does not evenly bisect the trail and I wanted to complete the longer section first.  It turned out to be a great decision for us; there were far more small water sources on  the ascent (when the dogs need it most),  the few rock slabs towards the summit are far easier to climb up than scoot down, and the descent was steeper (within reason, this is preferable for me because we cruise down). 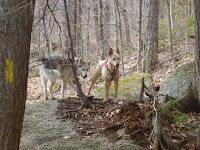 The trail continues lazily through mostly hardwoods, even dropping minutely here and there with mostly smooth dirt/leafy footing.  Then they abruptly give way to spruces and other conifers and the “up” begins.  Something about the trail once it levels out here... the spacing of the trees, the hazy light filtering through, and the skinny trail alternating over dirt and rock is very fairy tale – esque.  Then over a granite slab and up onto the rock to the first viewpoint.  I couldn’t tell you what I was looking at but it was pretty.  This is also where the ledges begin; they're enough to exercise caution around but didn't slow us down. 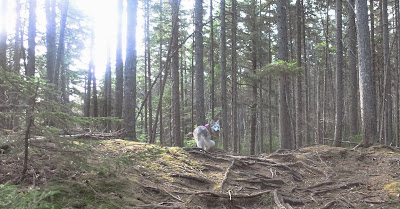 The stretch of trail over the ledges is definitely a high point of this hike (the high point for me).  Something about the seclusion, smooth rock surfaces dotted with scrubby flora, and the view upwards at greater peaks felt…(so corny)… magical.  I lingered as long as Ty would allow. 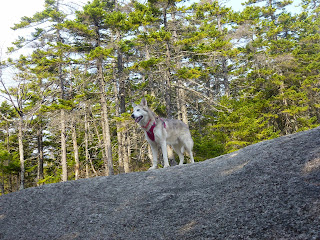 The trail drops back into the woods and alternates between smooth, eroded and root-y with some very brief rocky sections, and smooth rock.  There is one place near the summit where the rock looks like big humps and I feel like we’re running over the back of a dragon.    We cruised past the summit (I snapped a quick photo and as I was walking past thought, “oh, that must’ve been it.”) In and out of trees we went with some nice views I mostly took in briefly from the trail and ignored the herd paths offered for better viewing.  Pups were in their “all business” mode already.  The terrain is rockier and steeper from the summit back down to the start of the fork than on the other side of the ledges but we moved swiftly. 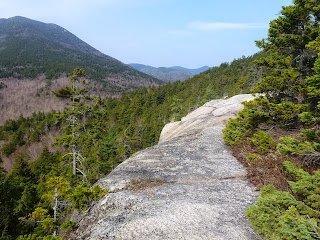 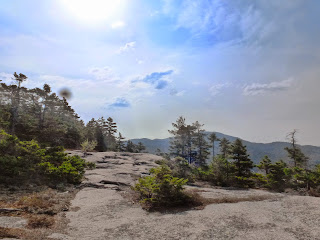 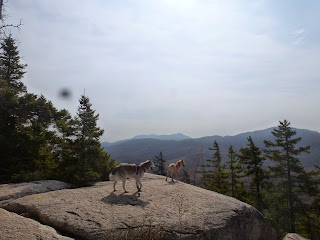 It wasn’t until after we passed the fork that we started passing other hikers.  I was glad to have enjoyed the cooler morning but it was nice to greet the later starters.  I had hoped to do a little extra trekking but as I sat in the back of the Subie with the map over my legs, one dog resting beside me and the other panting in the back seat, I called the morning a success and scraped the plan.  We made a pit stop at one of the pull offs for the Swift River, rock hopped a bit, almost fell in, and headed home. 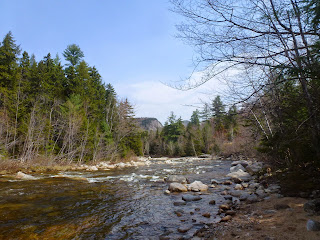 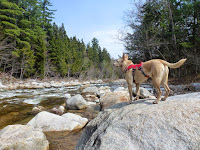 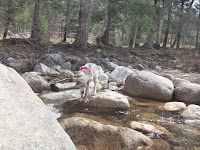 This a fantastic 4.8 mile hike for some many different reasons.  The highlight for me was the ledges but the entire trail was enjoyable.  The trail and environment are engaging with their variety and there are plenty of vistas.  The almost completely dry trail made this the perfect choice for someone itching to hit the trail but not willing to deal with the melting conditions going on at higher elevations.  I would not consider any part of Hedgehog to be difficult but it does give one a small taste of many of the features one is likely to encounter on larger hikes: knarly eroded trail, steep ledges, great views, etc. while staying on the moderate side for a summit hike in terms of overall footing and grade.  Think Mt Major +1 difficulty point….  Even the length and loop-style trail is great for half day or newbie adventurers since it introduces one to more than an out-an-back.  Ty got to do her mountain goat rock climbing but Tango wasn’t pushed to over exert himself and with the accessible water, this was a great one for them as well.  Oh, and it is one of the 52 With a View if you’re a list person!  Gushing over, thanks for reading and happy trails!


Additional notes from a revisit to Hedgehog on 4/23/2016:  I hadn't realized before how eroded this trail is.  That explains how it sometimes feels like you're walking on a bed of roots.