Carter Dome in the Rain

The big weekend!!! Everyone was more than ready to embark on our Bonds trip bright and early Saturday morning.  But Mother Nature cares nothing for plans and every once and awhile, the weather gods have to put me in my place after a string of sunny hikes.  Saturday was rained out and called for thunder.  The group agreed to hold off but still wanted to get out for a dayhike Sunday, which looked decent.  But of course, as everyone prepared to leave RI for our home in Saco on Saturday night, the Mount Washington Observatory and local forecasts predicted thunder.  Even Ty would turn down a hike if it includes that.  But our will to be in the mountains was strong....

Molly and her dad still needed Carter Dome for the 48's so after talking with Dan and everyone at the house, we agreed to defy the predictions and around 8:00 converged on the Nineteen Mile Brook Trail in Pinkham's Notch. 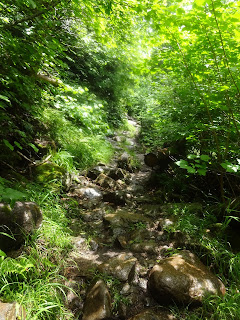 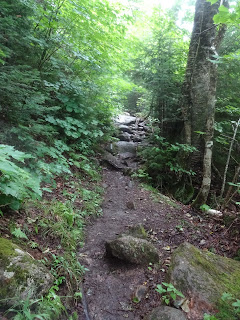 I should introduce the "we...."  Linda, who had last done Tuckerman's Ravine and Frankenstein Cliffs/Arethusa Falls with us; my friends Liz and Shawn with his malamute mix, Pele;  Dan and Molly all hit the trail with Tybtangs, our foster Liza, and I.  Now that's a pack!! 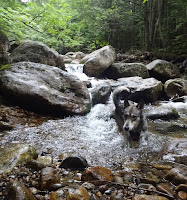 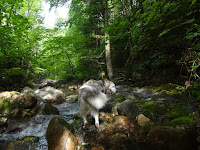 Ty and Pele led the way, trotting through the woods with intent.  The trail was damp but the walking was easy, over mostly dirt.  The first section of 19MB is one of my favorite trails for its easy grade, okay footing, and numerous points of access to the brook, not to mention the gorgeous man-made pool. 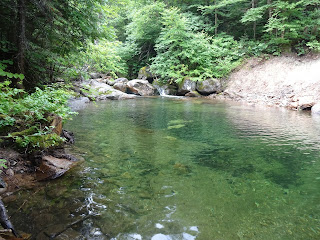 By the time we reached the junction for the Cater Dome Trail, Molly was off leash, Tango was bringing up the rear in his Ruffwear Swampcooler, and Liza's bungee leash was dragging.  The dogs were evidently feeling like a pack and it was incredible to watch.
Back to the trail description - the grade remained moderate and the footing was still decent.  The rocks were slick but still maneuverable due to their low profile.  We moved away from the river and onto the mellow switchbacks.  Somewhere along the longer switchbacks, the skies final let loose.  I was far behind by then with Tango and Liza.  At that point, she was leashed back up temporarily as she tried to hide from the raindrops in the bush and refused to come out.  Backpack issues unleashed themselves as I became drenched; in that moment I would've been happy to throw in the towel and I had Liza's vote.  But the group was waiting for me, donned in rain gear and the dogs varying in emotion from impatient to sulking in a self-made hole.  We asked Molly why she thought a hole would help shield her from the rain but we merely got the stink eye.  Positivity is infectious and being back with the group, I was happy to move forward.  The rain had let up by the time we reached the junction for the Zeta Pass/Carter Moriah Trail. 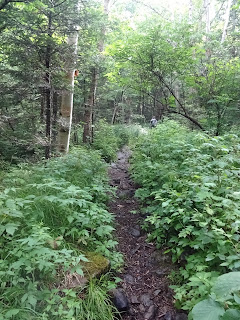 Between there and the summit, the grade continued to be moderate (though it seemed steeper on the decent) and the ground became more small rock than dirt covered.  Still no big knee-lifters, which I was grateful for since I'd been lax on my exercises for my knee and for Tango's level of enjoyment.  There were two more junctions where we could've made a detour to Mt High.  Had there been a chance for views, we would've done it.  Our arrival at the summit was greeted with more rain that subsided after a couple of minutes, allowing for just enough time and motivation to snap a couple of photos. 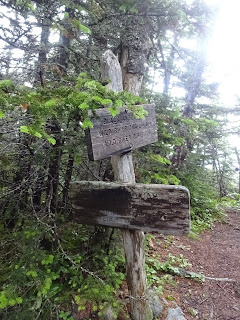 As usual, not much to report about the decent.  It's easy to go at a decent pace (2-2.5 miles an hour) without risking life and limb falling but does become rocky at times.  We stopped at the first water crossing we enountered and hung around for a bit.  The sun had come out, the humidity was starting to pick up, and it was simply beautiful.  I was as happy as I was on the ascent for the numerous water sources; reaching the warmest point of the day, the humidity was affecting Tango and I made him put his Swamp Cooler back on.  19MB Trail always seems to end abruptly and before long, Linda, Tango, Liza, and I (who had fallen behind) were back at the lot, reconvening with the rest. 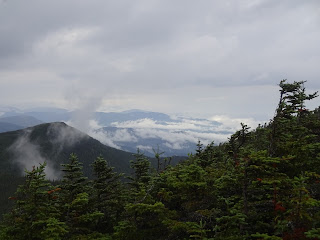 The day's biggest challenge was the weather.  The route we took is, in the context of a NH 4000 footer, moderate.  The description in The Four Thousand Footers of the White Mountains is spot on.  It can be very difficult to judge something so subjective as difficulty for others' benefit.  In a lot of ways, this hike reminds me of Galehead.  At 10 miles, it is on the longer side of what we do but they're not trying, difficult miles.  I enjoyed the multiple junctions to give me markers.  Until the first switchback on the Carter Dome Trail, running water crossing or parallel to the trail is plentiful for the dogs.  It's available again at the next junction (Zeta Pass/Carter Moriah Trail) and here and there on rainy days (or in puddles on the trail) after that.  The summit clearing is broad so the dogs could spread out and entertain themselves as we took pictures.  (It is generally still wooded, which we appreciated as we waited out the rain.)  There are a couple slick sections of rock that challenged newbie Liza but no places where hoisting was necessary.  I would consider Carter Dome a great peak for those who've already built their dog up to 4000 footer-level difficulty but now want to work on distance/endurance.

While yesterday's hike was awesome and I learned my memory had not done due justice to Carter Dome, most of what I find myself continually reflecting on was the experience.  Hiking with five dogs, members of some of the oldest breeds in the country, the sense of being a pack was magnificently strong.  They stuck together, checked in, teased, deferred to, and respected one another.  I found myself constantly mesmerized watching them interact.  On top of that, I have rarely seen so many great examples of the human-dog bond that I can appreciate at a deep level.  The photos won't show that, not quite, not ever.  But hopefully they're experiences readers will pick up on when they're out there! 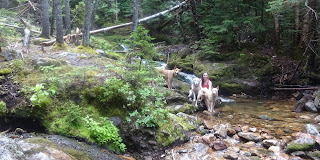 Sunday was also Tango's birthday.  Though I'm not sure most 8 year old's would want their birthday party to be a hike, he was as happy as I was for the wonderful company we were in with friends and family and got  cheeseburger in addition to use usual post-hike treat!  I did promise him no more 10-milers and no more humid days! 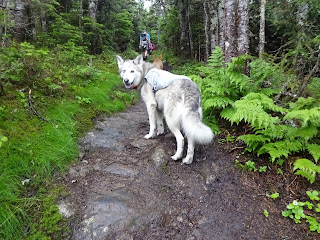 What's one to do with a hot day, a new foster dog who needs to be trail-ready by the following weekend, and a love for the mountains - hit the trail with new friends!

Saturday we picked up our gorgeous new foster dog, Liza, for Saving Carolina Dogs.  Knowing  our big Bonds trip that we've planned for quite some time was coming up, I had to get this chica on the trail to evaluate her.  I've been wanting to repeat Pierce for awhile and knew it'd be dog friendly for a first timer and warm day.  There was also a group going from one of the Facebook pages I belong to so it was an easy decision.

We started a little after 8:00. The temps were already in the mid-60's but the dogs were all super enthusiastic.  Passing the first natural pool of the day at only .4 miles, where the Crawford Path and Connector (to the main parking lot on Clinton Road) meet, put them in extra high spirits.  I decided to try a new tactic for Tango and start him in his Ruffwear Swamp Cooler before he got warm and uncomfortable and I think it worked out really well.

The trail is very consistent from the start.  Elevation gain is pretty constant and forgiving.  The trail is predominantly dirt, interspersed with low rocks.  Even when it gets rocky, there is generally an easy to follow dirt path through the easiest section.  No big boulders, no scrambling or hopping -it really is one of the most enjoyable hikes I've been on.  (Not to say Ty and I don't enjoy a good scramble but for Tango just wanting to mosey along and a brand new pup, Pierce is ideal.)  I believe the women in the group for whom this was their first 4000 Footer would agree it's beginner human-hiker friendly too! 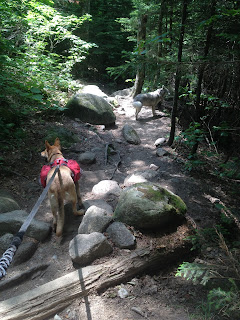 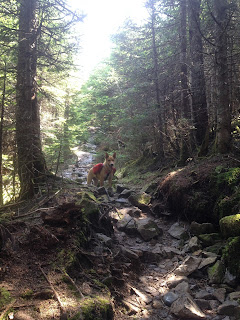 It's 1.9 miles to the junction for the Mizpah  Hut.  It was there that my heart broke as I realized my camera didn't have an SD card.  Anyway.... We opted to continue on the Crawford Path, which proceeds for 1.2 miles, just as welcoming as the initial section.  Normally, I expect there to be a "final push" before a summit but we were spared on this one.  Approaching the final junction before the summit, there is a gorgeous overlook of the valleys and Eisenhower over to Washington...or a bunch of clouds!  Just after the junction (take the right uphill) is another beautiful vista and place to sit on the rocks.  Barely out of site from there, behind some low spruces, is a large cairn in a small clearing and that is the summit.
After subjecting the pups to obligatory summit photos, we headed back to the open rocks to meet the group.  We took a few more photos and headed down as they proceeded over to Eisenhower.  Whether we liked it or not, we made excellent time on the way down, thanks to the trail conditions.  Ty picked up some extra mileage chasing squirrels (which proceeded to yell at us), TybTangs swam in the pool below Gibbs Falls, and I fell in coaxing Liza to join us in the wonderfully cold water.
I can't rave enough about Pierce. Sunday was a fantastic day - we escaped the worst of the heat, got to meet some wonderful fellow hikers - even getting to celebrate first 4K's with two of them (three if you include Liza!) - and making a lot of folks smile at our pack of five.  Pierce has excellent footing, a moderate grade, is long enough to feel accomplished but not too long to deter new hikers (6.4 miles), there's the option of going by the Mizpah hut, and fantastic views.  For the dogs, the availability of water for first couple of miles (and hence, last two) is good, if not great (mine prefer not to drink from a bowl).  After the hut, there is a lot less runoff after a string of sunny days; however it is available at the hut (in addition to other awesome things!).  A favorite peak with new friends!
Posted by pawsonpeaks at 8:53:00 PM No comments: