Today was a day that went totally not as expected but turned out to be what we needed.  In theory, the original plan was Jackson, then it was Willey, which we scraped upon crossing the railroad tracks when the trail had a pitch that was basically a frozen waterfall.  My two were able to go around although it was steep but I had a new foster (Skylar) attached at the hip.  We made an attempt but quickly bailed for safety.

Our attempt at Willey: 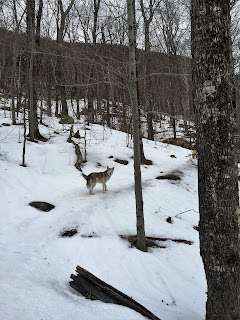 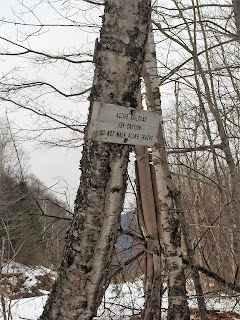 After a quick glance at the map, I drove us up to Crawford Depot and we set out for Willard, turning left at the fork with the Avalon trail that heads to Tom.  We encountered two small crossings almost immediately.  For the first one we took a few strides up the brook from the trail and crossed where it narrowed.  I carried Skylar across a log for the second one and TybTangs clumsily made it on their own. 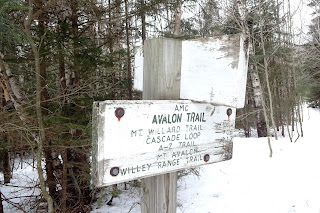 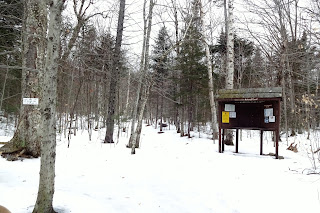 The trail was pretty icy but crunchy along the edges for the dogs.  No paw-postholing.  I opted for my "baby crampons" again and, despite my apparent inability to fit them properly, was very happy with the decision for the little extra digging-in power they afforded me when being pulled. 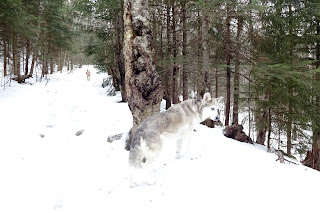 There were few turns in the trail; it was often a straight, magical-looking "tunnel of green" as we headed up the very easy grade.  As we gained elevation, the trail progressively became less icy but never lost the single-footing line of ice down the center that began in the parking lot.  Here and there, melting had begun in greater earnest than other spots.  I learned Sklyar is not a fan of icy slush! 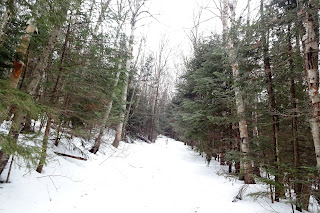 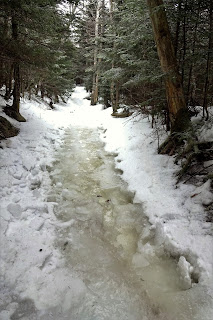 We reached the summit in about an hour and fifteen minutes and I made an attempt at summit photos.  Ty continued to dislike summit breaks in winter/wind and Skylar was wiggly as a puppy so the break didn't last long!  We did some light jogging on the way down.  Unfortunately, I believe I was "that guy" holding up the couple behind us for quite a bit.  Regardless, we made it back to the car and were back on the road an hour later. 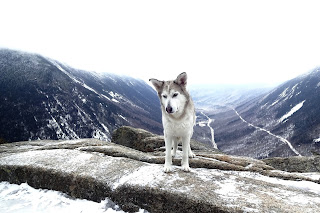 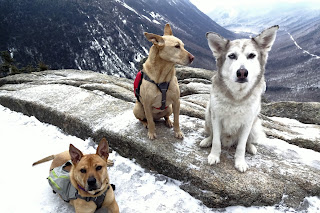 I'm glad we ended up on Willard for a lot of personal reasons I am still sifting through but ultimately, it gave me a chance to write about this one for the blog and was well-fitted for most of the dogs today.  It's a great little hike for new hikers, those short on time, and as a backup plan.  There is also a lot in the immediate vicinity such as Saco Lake and the AMC Highlands Center.  It can get busy so it may be a little tough to have dogs off leash respectfully but I believe the footing is even enough that a leash won't present a safety concern (I've only visited when snow hides the true terrain).  For comparison, it is a gentler introduction to hiking than Mt Major in Alton.  Skylar turned out to be not quite ready  for a big hike.  She was mentally ready but not leash-ready so this was a good introduction.  Tango was lagging a bit after sprinting up to the tracks on the Kedron Flume Trail so he took it easy on this one.  Ty was hoping for a little more excitement but you can't please everyone!  Wish us luck prepping Skylar; our next hike is at the end of the month!

Guilty of another repeat: Pierce and Ike

Anyone kind enough to follow us has probably figured out we love Pierce.  And Eisenhower.  We love the two of them together even more and is definitely our favorite hike.

Yesterday, we wrapped up an interesting January with a fantastic hike with some of the usual suspects and our new trail friend, Matt, who was celebrating a weekday birthday.  It was also a special hike for Ms Eva, who will wrap up her career with 6 NH4K's, as we are driving her to her new home in PA this weekend! 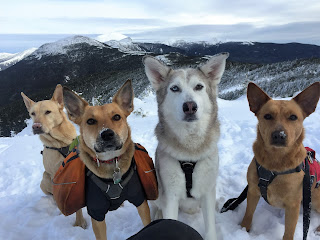 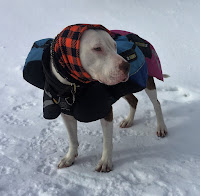 Since I've already reviewed this one before and the snow only served to make it easier (and more magical), I'll keep this one short and simply aim to encourage folks to do it themselves!

We began at the Crawford Connector at 9:00 and made good time chugging along after the dogs.  The trail is in perfect condition and Hannah was able to bare boot most of the hike.  Choosing to go in the opposite direction, I donned my Hillsound Trail Crampon Pro's.  I was lucky enough to snag them on a Facebook gear page for a respectable discount and thought it would be a good day to test out what I affectionately call my "baby crampons."  ("Baby" crampons can and will (read: did) shear clothes like legit ones!)

Back to the hike... The Crawford Path ascends via an easy to moderate incline.  It was well-packed with only a few icy steps above Gibbs Falls.  We reached the junction for the Mizpah Cutoff after an hour.  From there to the Webster Cliff Trail was a stroll.

At 10:35, we reached the ledge popular for a pre-summit break/photo-taking (all of which we indulged in).  Then we scooted up to the summit (take a "right"/turn south for two minutes/.1 mile) just to make it official (it was crowded!) before heading back down to the Crawford Path to head to Ike. 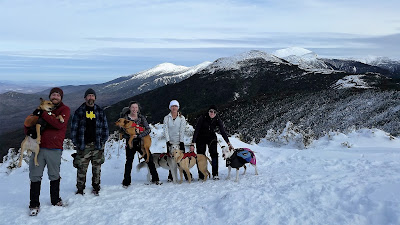 Pierce to Ike = heaven.  We traversed the ridge in and out of scrubby trees and over windswept rocks. The snow was not perfectly packed down but was still completely doable in light traction. While Eisenhower looked like it towered above, the trip between the two peaks was mellow and took about 50 minutes to reach the summit loop junction. 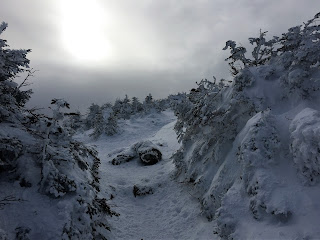 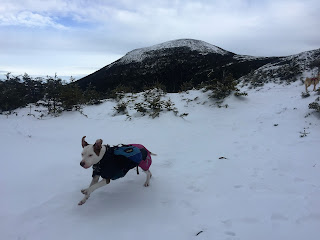 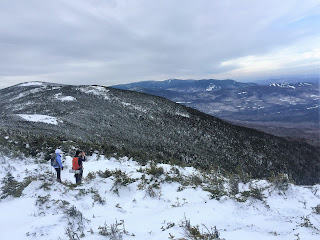 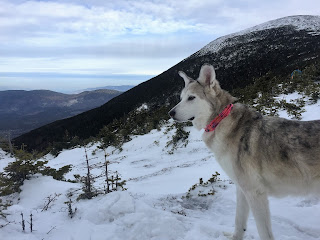 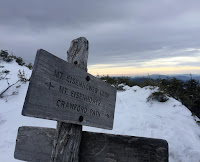 The .3 mile jaunt up the bald summit of Ike was the steepest and windiest portion of the hike.  Collectively, it took us about twenty minutes to reach the perpetually windy summit (only once have I visited a wind-free/low-wind Ike).  We lingered a bit but Hannah and I both felt inclined to get our girls back to where the wind was calmer.

barrage of photos from the summit loop: 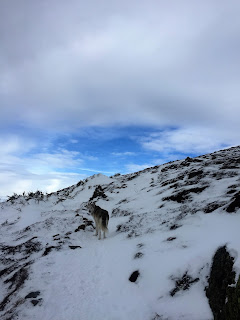 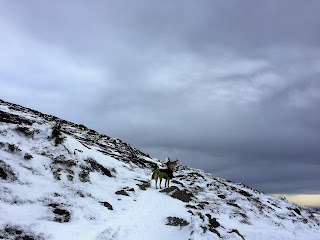 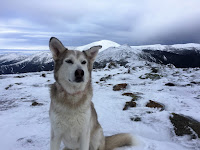 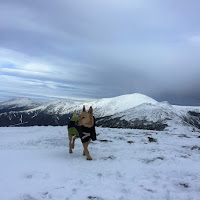 We returned via the same route, some of us virtually flying down the mountain.  Along the ridge, the temperature reached 40*.  It was unbelievable to be wearing a single layer and no hat or gloves along a somewhat exposed ridge in January.  (Thankfully, the winds were fierce enough on Ike to test Ty's new Hurtta Ultimate Warmer jacket, review to come because I am crazy impressed!). 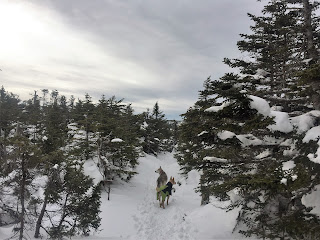 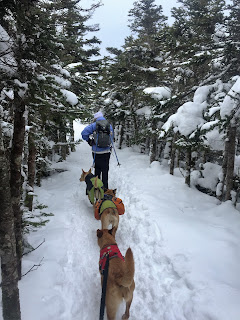 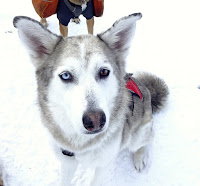 As I actively fight the urge to do nothing but gush about how awesome Sunday was, I'll summarize the main points.  We were treated to a spring-like trip with warm-ish weather but the beauty of snow all around. Your results may vary, as we did dance with the alpine zone on Ike and were exposed along the ridge.  This is a very popular hike; we were only one of several groups but we were accompanied by the only four legged hikers of the day.  As of 1/31/2016, snowshoes are not necessary and we did not see a single pair in use.  Barebooting is possible but light traction is highly recommended (or "baby crampons" if you're me and want some extra digging in power when being dragged by an exuberant Carolina Dog!).  There are some trickles of running water for dogs between the parking lot and Webster Cliff Trail, though none of ours felt the need to drink much.
Famously moderate grade and well packed for good footing (with traction).  I got to see rime ice (a long time goal) and now get to say I have entered the alpine zone during winter.  Cheating a bit since the weather was so warm but hey, I'll take what I can get!  Overall, a wonderful day with friends and a huge smile on my face for getting to accomplish a winter hiking goal, check off #6 & 7 (I have officially decided to somewhat actively pursue the "Winter 48's"), and seeing each and every dog full of bliss. It couldn't have been a better day!
Posted by pawsonpeaks at 9:20:00 AM 2 comments: