Another worthwhile turnaround: Greenleaf Trail on 4/23 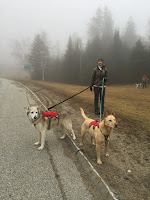 Forecast: early morning clouds and fog burning off to reveal a mostly sunny day with base temps in the upper thirties to begin the hike.  Reality: 42*, windy, and very socked in.  But we were excited nonetheless; we were meeting up with a handful of people including some new friends and with the optimistic forecast, we got underway by 8:00AM in hopes of reaching Greenleaf Hut and maybe more.

With the fog and overnight showers, the rocks were damp but free of snow or ice for quite awhile and I found myself surprised by the ruggedness of the trail.  It was also clear by the narrowness and wayward branches protruding into the trail that Greenleaf Trail is not nearly as popular as its sister trail, the Old Bridle Path, that also reaches the hut from Franconia Notch/Rt 93 in about the same distance despite it's generally moderate grade.  Reflecting on the day, despite how much I was huffing and puffing picking around large rocks and following the ups, downs, and more ups of the trail, it's overall grade began as somewhat moderate. 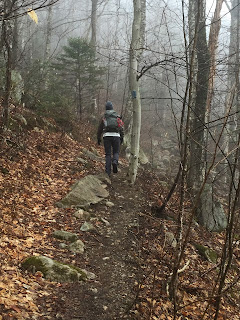 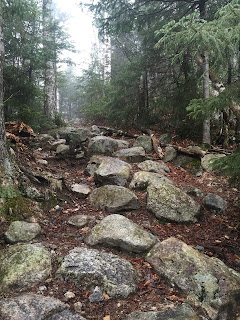 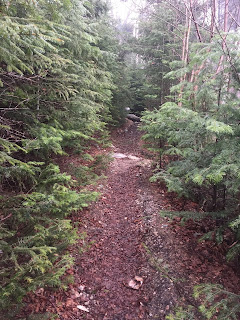 After a couple steeper sections and one unfortunate separation from Ty, half of our group reached a wild-feeling section called Eagle Pass.  (After turning my phone off airplane mode later on, we learned the rest of the team had turned around.)  Even in the fog, the towering rock walls were incredibly cool.  Due to the sudden arrival of ice, it was a good place to put on traction while marveling at the rock face. 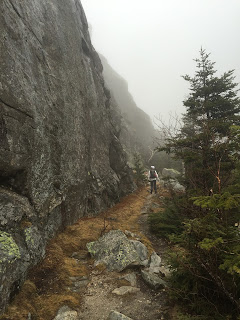 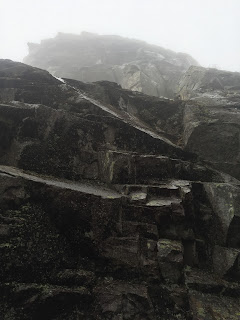 Beyond Eagle Pass, ice began intermittently but became more prevalent.  Although there were flat or easier sections, the overall grade increased, requiring me to assist Tango up the ice floes.  We made a couple of hard turns and stopped once to contemplate turning around.

Trail conditions between the Pass and our turnaround point: 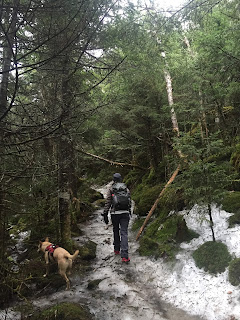 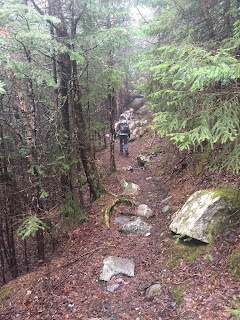 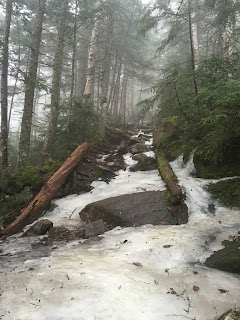 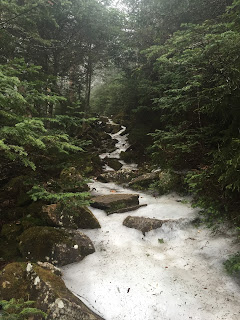 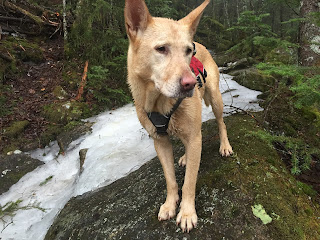 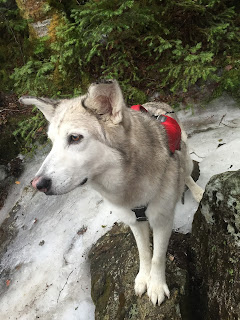 We decided to give it another ten minutes (equaling about one our and fifteen minutes since departing the Pass) since Tango was finally grasping the concepts of sticking to the side of the trail or slipping into the woods as needed.  Included in the fun were sections of spring snow that he got a bit stuck in, which I figured was better than slipping on.  At a left turn, we peered up to see the ice cascading from up the hill, over the trail, and continuing down - no space for him to avoid the ice.  In consideration of that, the fact that it looked like a long haul for me to assist (even with the padding of the Ruffwear Web Master Pro Harness, it can't exactly be comfortable for him), and assuming we'd have more sections like that, we called it.
We soon met back up with Hannah, who had stayed behind to make contact with the departing group and she and Titus had made good time catching up.  Descending reinforced that we had made the correct decision in turning around, as all the sudden going down solid ice in microspikes made us realize the steepness!  I was wearing my baby crampons and had no issues, score one for Hillsound!

We removed our traction in the same place we had originally put it on and gradually, the rocks became drier, adding some ease to the descent.  The fog had mostly burned off but it was still cloudy... Except a patch of blue floating above the ridge as we were preparing to leave.
Admittedly, this is a late report but I think still valid.  Temperatures haven't been balmy and yesterday we even got a little snow so the ice...is still there.  Repeat: THE ICE IS STILL THERE. 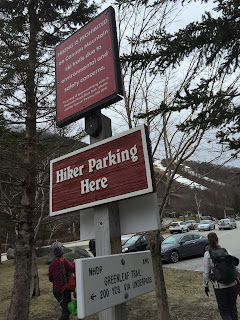 We decided to meet for coffee in Lincoln before going our separate ways and laughed at the beautiful blue, puffy cloud skies and milder temperatures outside of the Notch.  After our Dunkin run, I drove back towards home along the Kanc and pulled into the Downes Brook parking lot but hung out for a bit, letting the dogs rest, while I decided between Sawyer Pond, Hedgehog, and Potash.  Finally, I switched some things over from my winter pack to summer one and we headed towards Hedgehog. No trip report this time but the trails are dry and I'll be adding some general notes about the trail to my post from 5/14/2015.

We definitely plan to return to Greenleaf Trail when the ice melts, though Tango may stay at home to avoid stressing his joints on the ups and downs of the boulders on the trail.  It is often rocky and builds in difficulty though I am told it is not a strenuous hike overall.  There was a fair amount of small channels of runoff for the dogs to drink from.  We enjoyed the trail and scenic variety - Ty perhaps a little too much!  Looking forward to a return visit in the future!
Posted by pawsonpeaks at 9:22:00 PM No comments:

A short trail description for a long walk in the woods!  Friday morning, TybTangs and I took a nice meander up Lincoln Woods Trail to Franconia Falls and Black Pond.  Not knowing how the weather was going to pan out or what sort of hike we were in for the next day in terms of conditions, I thought it would be a great hike to start the weekend.  Thankfully, the dogs informed me I chose well! 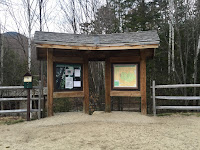 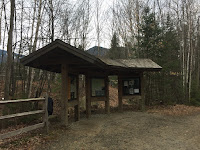 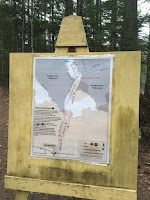 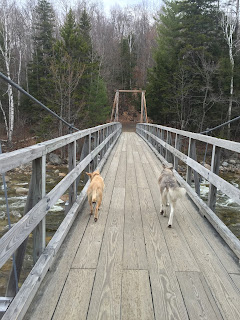 Lincoln Woods is accessed via a large parking lot, which is your first indication this is a very popular trail.  Luckily for us, I had Friday off and there was some very light rain that had recently fallen and was forecasted to occur again so it was fairly quiet.  I figured we would head up to Franconia Falls (round trip 6.2 miles) but we tacked on another 1.6 miles (or two if you go by the trail signs) when we decided to check out Black Pond on our return to the car.
From the trailhead, we followed the path past the ranger station and over the suspension bridge that wavered subtly as we crossed.  A right turn and off we went!  The trail is very broad and flat, which is really as much as this trail description needs.  It follows the river and the noise of the water was comforting when we were out there alone.
The trail is also a multi-use trail and, while we didn't encounter anyone on bikes, there were  tracks in the mud.  The mud situation is minimal; the trail is so broad that the small amount of mud we encountered on LW could be walked around.
We walked as far as the second bridge, where the spur to Franconia Falls is on the left.  That trail is more of a traditional nature trail - single file but not narrow, and some very minor rocks, roots, mud (at the moment) and incline.  Apparently Franconia Falls is wicked popular in the summer and I can see why.  It's super cool and for an attraction not immediately off a major route, it is very accessible.  We spent a little time wandering the rocks and making it to the official end of the trail that Tybee did not wish to acknowledge! 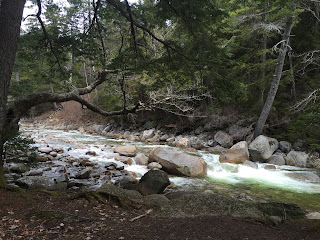 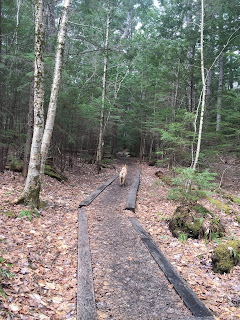 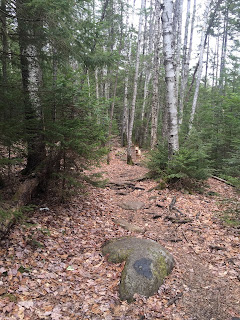 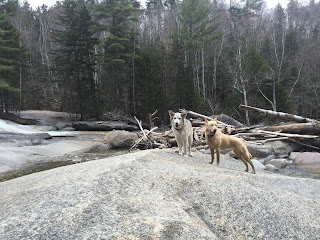 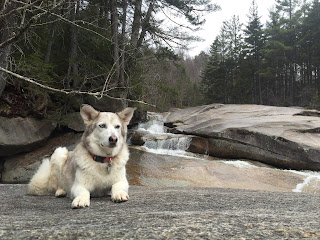 We were making such great time and the weather was so cooperative that we also took the spur for Black Pond on the way back. This one was evidently less popular and more of the narrow hiker's path one expects.  Still, a pretty flat walk overall (some small, gentle ups and downs) and decent footing (ranging from easy to some roots and slick leaves to be cautious of, as well as mud at the moment).  The view of the pond was very pretty and it felt cool to visit such an untouched body of water.  Unlike Franconia Falls, there was no end of trail sign and I had to convince Ty that today wasn't the day to find the Black Pond Bushwhack! 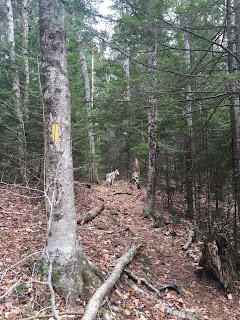 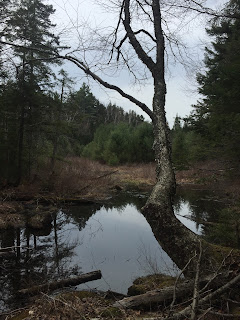 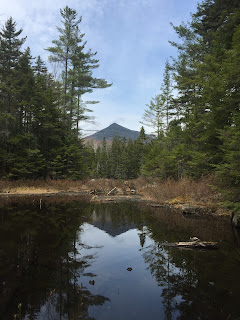 We really enjoyed this 4.25 hour walk (included random breaks and photo opps) and hope we can do it again with some less hiking-inclined folks before it gets busy for the season.  I felt good about the mileage but it was in no way taxing on my "old man."  Both dogs benefited from lots of access to water (though anything running from Black Pond is probably a bad idea due to the beavers).  It was an ideal start to our weekend and perfectly situated right down Rt 112 from Hancock Campground, where we later met up with Linda to spend the night drinking, chatting, and struggling with my new-to-me (gifted from my stepdad!) Coleman grill in preparation for the next day's hike up to Greenleaf Hut with more hiking humans and pups.  That didn't quite happen but we had a great hike anyway and finished the day on hedgehog enjoying the sunny skies outside of the notch!