Back to reality after a spectacular day hiking Liberty with the girls on Sunday. We started at 8:35 from the Flume Visitor Center/Rec Trail.  Our timing was perfect all day in regards to the weather and passing fellow hikers, meeting just enough folks to enjoy some chit chat without making the girls too uncomfortable with the delays.  Every Carolina Dog-type I’ve ever hiked with is an impatient, trail-focused peakbagger! 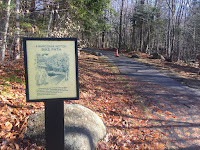 The Rec Trail was almost entirely bare of snow and is a nice rolling warm-up.  Shortly after the second bridge was the beginning of the Liberty Spring Trail and Ty immediately found it.  She scampered off ahead while I did my best to keep a good pace for Sage.  I don’t know how I’m going to handle inclines once she gets adopted; we've become nicely in sync with her moderate, steady pulling powering us forward!  With her assistance, we reached the junction with the Flume Slide Trail in 20 minutes. 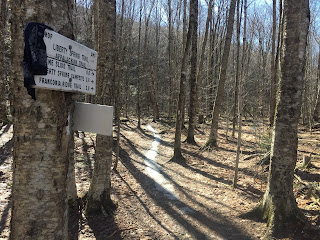 I enjoyed the relative ease of the trail with its easy-moderate grades and good footing.  Upon referring to my 4000 Footers book, the trail design made sense as it was an old logging road.  Inevitably, with the weather we’ve had and brilliant morning sun, there was a lot of mud and puddles along the trail. 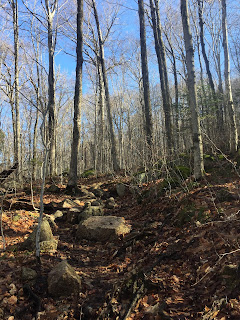 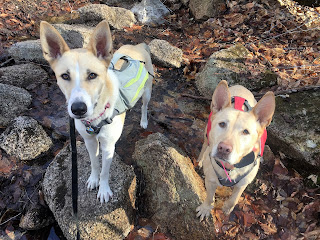 The puddles turned to running water walking up the hill after the trail intersection before drying out a bit.  Approaching 2000'  we began to see the first signs of monorail.  They were quickly melting, truncated sections that were easy to walk around or over, being slippery but not icy. 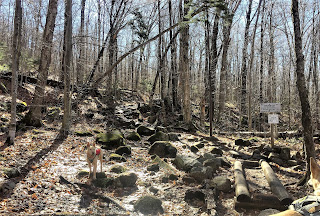 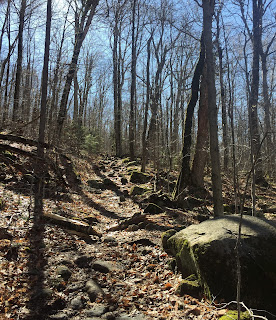 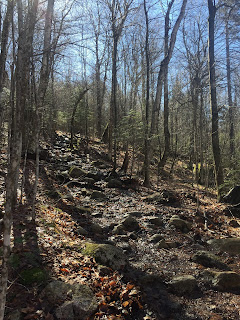 The only water crossing more than a one-step came at 1.9 mi/2050'. It wasn’t too bad (Ty did it several times) but with a clumsy human with way too much gear for her pack’s dimensions and a leashed dog wary of running water, it took some time to get us across but we did it without any tantrums or splashing.

Then up and over the first staircase, through some more open hardwoods with a nice leafy cover before the real work began. 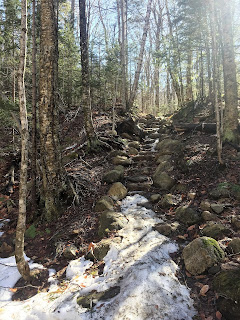 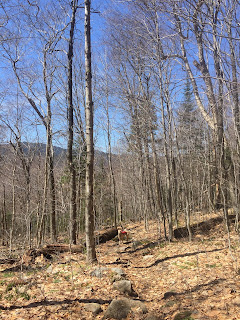 Around 2500' (appx 2.25 mi) the tree cover becomes denser and the snow’s recession was dramatically less than below.  I’d already dumped my snowshoes a few hundred yards back (they’re really, really not needed) and had opted to bring my Hillsound Trail Crampon Pro’s for traction.  I knew the snow would be of the slushy, melting variety and with the extra pull of Sage being hooked to me, I preferred them over my Kahtoolah’s.

And then the work began.  I wouldn’t call the trail “steep.”  It’s no scramble.  But it was a “one step in front of the other” kind of trudge for awhile.  I gave myself a pat on the back for remembering my trekking poles and again seriously questioned my ability to go upwards sans 1-dogpower. 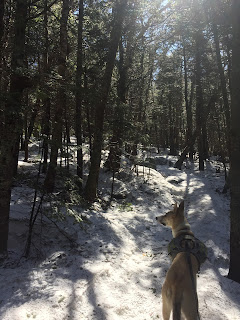 In the evergreens, the ultralight dusting from the night before was melting off the trees, giving the impression it was raining beneath bluebird skies.

At appx 3000' (if I'm remembering my GPS's unmarked waypoints correctly!), the grade lessened.  Not considerably but enough of a reprieve to be thankful for and I started thinking we should be seeing signs for the tentsite soon.  And happily, we did, as I was getting a little tired of the trees raining on us.  The tentsite is reached after 3.4 miles of hiking at 3870'.

Another 10 minutes and we reached the ridge, where the trail signs showed just how much snow is still left. 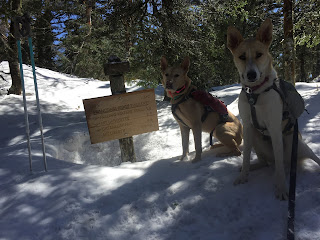 Have I mentioned how much I love ridges?! Magical. It’s the only word I have.  The blue sky, the low trees with moss and rime hanging off them, it’s enchanting. 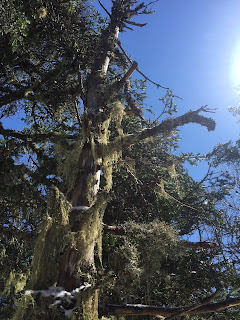 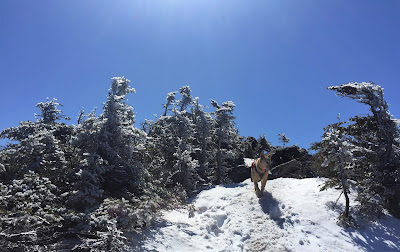 It wasn’t long before we reached the ledge from which the standard Mt Liberty picture is taken from and I tried unsuccessfully to get the girls to pose.  Ty was especially upset about something; I believe she may have slipped into the krummohlz while hiking ahead with a faster pair.  In any case once I abandoned my picture-taking for forward motion, and she was fine.

We traversed a very short, narrow, and slippery monorail for a minute then walked up the open ledge to the summit.  The smooth rock is free of snow but the sections in between are still snowy.

We were treated to minimal breezes, bright sunshine, and the company of only two other (very tolerant and cool) people at the summit.  The girls humored my skipping around taking pictures and trying to pose them, whined a bit while I snacked, then finally settled a wee bit once a couple groups arrived.  They really outdid themselves allowing me to sprawl out on a rock and enjoy the sunshine for a few minutes.  A couple of other dogs arrived and I was too lazy to leash Ty so I could close my eyes so I opted to pack up. 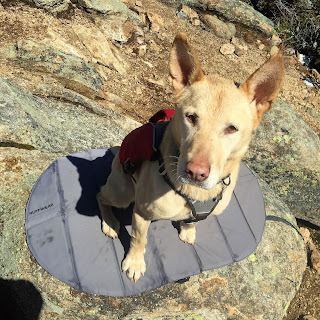 Nothing much to report about the descent.  It was quick and fun and I finally just couldn’t go any faster so Ty had to slow down for me.  The lower section of Liberty Spring Trail was quite a bit drier than the morning but with the rain that's falling as I type, that's bound to change. 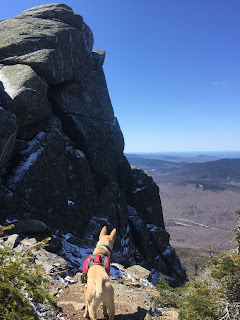 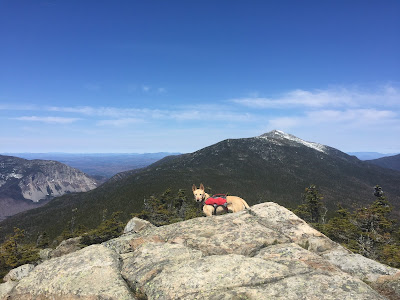 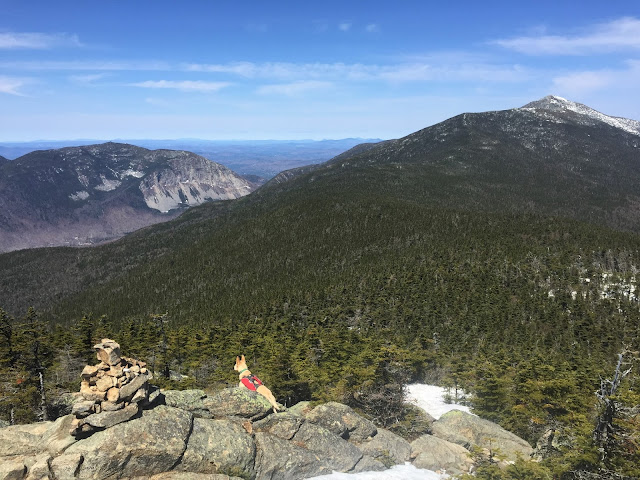 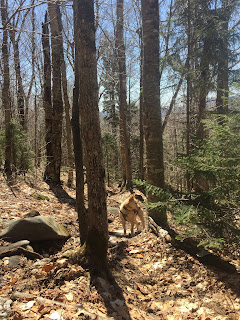 Liberty was a perfect progression in difficulty as we try to get back into bigger hikes and the conditions right now – perfecto!  Between the warm weather and clear, wet ground switching to stable monorail, many different clothing combinations will work.  I saw people without traction but microspikes or similar are strongly recommended.  Snowshoes – not needed! I spoke to a few folks who went over to Flume and they said they weren’t needed in the col either, just stay on the monorail.

Then there are the views.  I didn’t know where to point my camera nor where to end a pano shot!  Nothing but 360* of breathtaking views.  As for the girls, they were in heaven.  Lots to sniff, engaging trail features, not too strenuous, and a good trip to have a dog on a leash without worrying about being dragged into a boulder or over a cliff.  The summit has some steep drops but the rocks on the south side create a natural barrier and there’s thick trees elsewhere.   Plus the girls have solid instincts.  Very solid, in fact, I couldn’t get Ty to go anywhere near the edge for a photo. It’s a nice open summit and since we were lucky enough to beat the crowd, it’s a really nice place for pups to wander within reason.  I surmise a lot of folks were over on Washington due to the nice weather and I’m fine with that, it was nice to see folks on the trail but it reminded me that summer and crowds are coming and I’ve definitely become the awkward chick on the trail!
Posted by pawsonpeaks at 9:46:00 PM 2 comments: