Halloween on the Crawford Path (Eisenhower and Pierce) 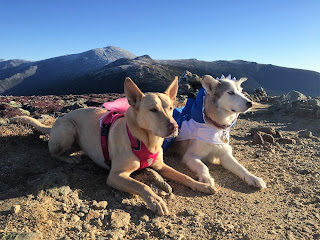 Happy November and welcome to shoulder season!  Two weeks ago, we first encountered such conditions on a hike for which I never finished my report.  Boo on me because it was an enjoyable and challenging hike up Carrigain for Dan's NH4K finish.  That was on October 25th.  The wind had a good bite to it; Signal Ridge Trail was covered in leaves, mud, and occasionally ice along the rockiest stretches; and there was a dusting of snow at the summit.

On Saturday we met up with David and his dog Meka for the first time to do Eisenhower and Pierce and encountered more of the joy that is the shoulder season.

Around 5:50 AM, we headed up the Crawford Connector from the parking lot on Clinton Road.  It was our first time departing in the dark, something I'd been wanting to experience for awhile.  Hiking with someone who's done it countless times made it fun and no different than hiking in the daylight.  Except that Ty was leashed for the first hour.

Thanks to David and Meka, we made okay time up to the junction with the Webster Cliff Trail, though I know we slowed them down!  It was about 7:40 and we had missed what looked like had been a hazy sunrise but still enjoyed an incredible view while continuing on to Ike.  (We held off on Pierce knowing we were to meet more friends there later on.)
I was astounded at the lack of wind as we continued on.  Up until  that point, the trail had been wet and slick for a step or two but hadn't affected my pace; however, ice became a common obstacle on the ridge.  Flat sections were narrow skating rinks and rocks were iced over.  Of course I had left my poles in the car and David graciously lent me one of his.  The walk to Eisenhower is a relatively flat one until one reaches the loop - a detail that made the walking over ice much easier than it might have been otherwise.  We could have put light traction on but between each icy section there were still enough dry stretches that it wasn't worth killing our gear (or putting spikes on/off/on/off...). 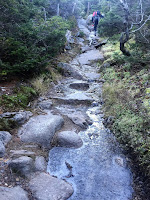 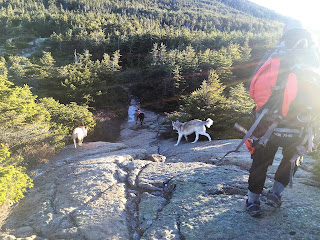 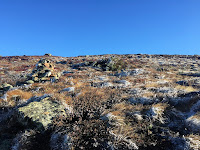 The loop trail was clear of ice and the low vegetation and cairns had some rime on them, a sight I am rarely lucky enough to witness.  There was some wind at the summit but it was shockingly tolerable (at least to me!) and we were there for about 45 minutes, playing games with the dogs and, for me, subjecting them to photos in costume.  It was Halloween after all! 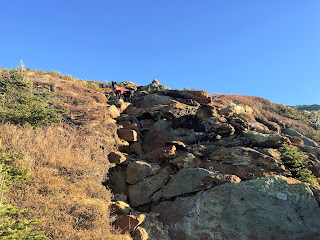 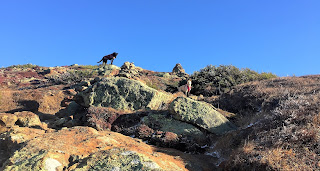 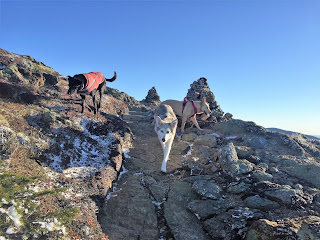 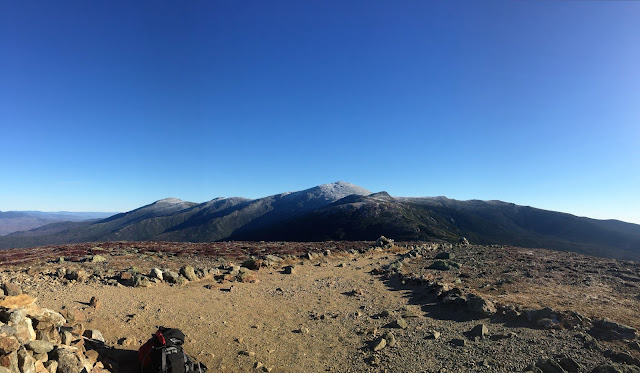 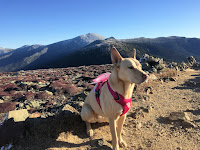 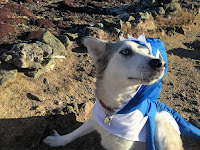 Back on the Crawford Path, the ice had started to melt, making for more slippery ice.  The wind was nonexistent, we ran into the first two other hikers of the morning, and the views were gorgeous.

At 10:30 we reached Pierce and I was still astounded by the mild weather.  We had prepared for wind and I was excited for the cold that Tango would've thrived in but it had to be in the upper 40's/lower 50's in the direct sun because I wasn't wearing gloves (I get cold easily).  Marcy soon arrived with Tucker and Sonny (more of our Facebook friends).   Marcy's storytelling is wonderful and she explained her tardiness and some of Tucker's most memorable escapades as Tango the shark napped in my lap, much to Marcy's amazement.  She said she'd passed at least 15 hikers on her way up so I put TybTangs' costumes back on, ready to solicit smiles.  Between their Halloween spirit and the canine convergence on the summit, many hikers were entertained! 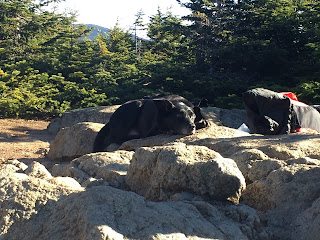 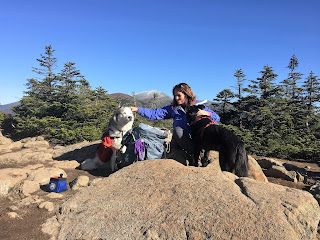 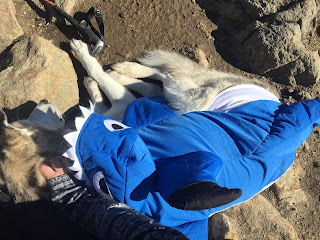 An impressive two hours later (Ty had light reflections and critters in the summit cairn to occupy her for that long), we headed back down the Crawford Path.  It took about an hour and a half to descend the icy (predominantly north of the Mizpah Cutoff intersection), wet, muddy trail.  We passed another handful of people on their way up and only one other dog.  Meka and Ty got into a nice tag team routine chasing critters, whose angry chirps we smiled at with amusement. 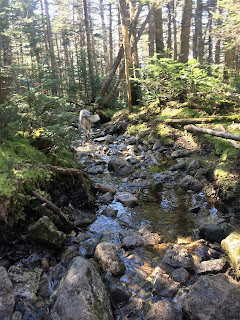 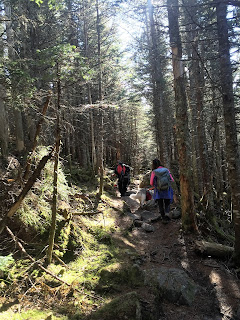 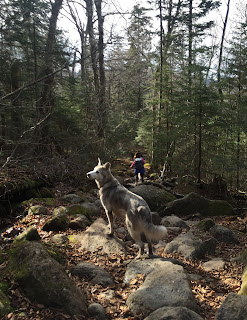 At the (strangely empty) parking lot, David had celebratory ice cream for everyone.  Today was Meka's birthday celebration hike!  She is 10 years old and still kicking butt doing double-digit miles.  It was awesome to meet them and Marcy with her pups; putting faces to names is always fun, especially when dogs and trails are involved. 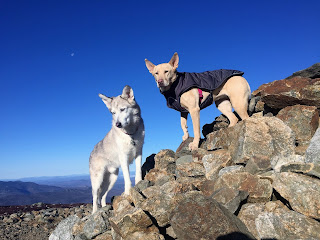 As in previous trip reports that include this section of the Crawford Path, I'll again extol its overall awesomeness.  The views are vast and beautiful and  the grade is easy to moderate.  The trails are mellow enough for Tango but also offer enough excitement for Ty. (Though I wish she would remove "lose collar" from her list of exciting trail activities!)  There was plenty of water access for them.  More runoff streams were flowing than I'd seen before due to the recent rain.  To this report, I will add that right now, it is more difficult than usual due to the wet and icy conditions.  Ensure your clothing and footwear are waterproof!  We had traction but opted not to use it, just took the extra time to move carefully over the ice.  At the very least, I would recommend trekking poles (for the ridge) but those are not requisite either.  Overall the dogs were unaffected although Tango had a few missteps on the ice.  As always, a wonderful hike with my two loves!
Posted by pawsonpeaks at 8:39:00 AM