Route: Starr King Trail (out and back)
Distance: 7.2 miles (roundtrip)
Elevation gain: 2,700'
Duration: appx. 6.75 hours at a comfortable walking pace; for those looking for a shorter hike, this is certainly doable as a half-day hike, we enjoyed taking our sweet time! 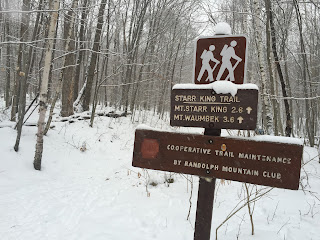 Saturday we had the pleasure of hiking with Vanessa and Jared with their dog Tank and Hannah with her pup Lilo.  Driving conditions and traffic caused quite the delay on my end and we finally hit the trail at 10:15AM.  The temp was right around freezing and stayed that way throughout the day.  We even got an almost completely wind-free day in the clouds!  While a long day, the trip report to follow will be uncharacteristically short for this tired, newly full-time career woman! 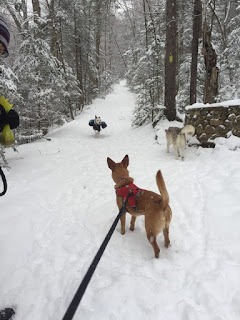 The snow was falling lightly and the dogs launched onto the trail like horses in a new pasture.  The trail was gentle, wide, and straight, adding to the degree and ease of their frolicking.  Within forty minutes, it had narrowed but still at an easy grade through snow-covered, empty trees.  We slowing wound around a large blowdown and further up, only a handful of times even noticing there would be some boulders to step over along the way during the rest of the year. 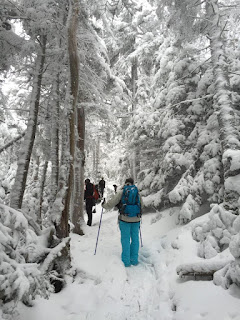 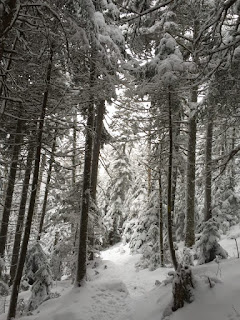 As the pines took over, the trail became a narrow path along a steep hill.  To our delight, the trail's grade continued to remain gentle (are you noticing a pattern?!).  Beneath the snow, the trail was a continuous sheet of ice.  Most of us wore (light) traction for most of the ascent and total descent and the snow cover was sufficient to not affect us but my mind flashed ahead to the spring and I wondered how challenging it will be once that becomes exposed. 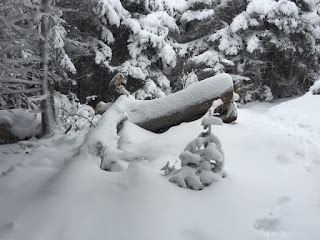 Reaching Starr King took a little bit longer than expected but we definitely enjoyed the journey.  We stopped for photos and the realization that I (thought) I lost my keys.  Between Starr King and Waumbek were some more ups & downs and twists & turns than I'd initially recalled but it was very enjoyable with the "warm" temps and winter wonderland atmosphere. 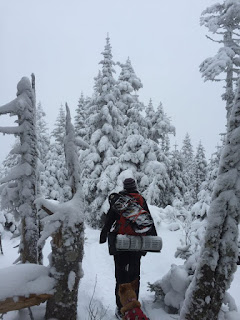 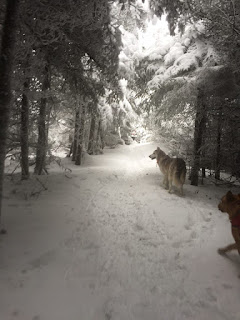 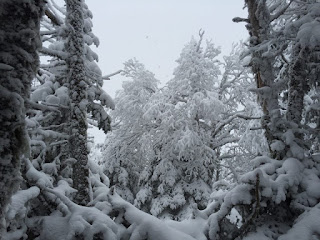 The summit was marked by a cairn and small clearing (enough to gather for snacks).  Hannah and I led the dogs past the summit by 50 yards to the viewpoint, of which there was not much on that particular day.  We enjoyed some snacks, I argued with Ty, and we packed up to head down. 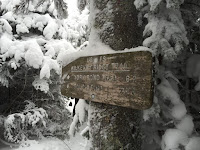 Not much to tell about the descent except that it seemed to fly by.  It took just over half the time it took to go up to the summit, even with my frequent stops to call out to and wait for Ty (we're going to take a hiking break to work on recall....).   At times, it was very foggy and I believe Hannah was right, that we were hiking through a cloud - cool stuff!

Back at the car, I found my keys (in it) and the dogs all piled in and promptly fell asleep, blind to the fact that there was still fun left to be had that day (we returned to Vanessa and Jared's hotel room to watch the game before departing). 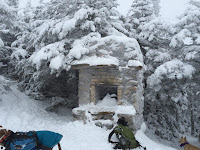 My primary reason for posting about our Waumbek trip is to add my two cents to the hundreds of dollars-worth of kudos for the Starr King Trail to its summit, especially in winter.  The trail is fabulously gentle.  As of Saturday, even with the light snowfall as we hiked, it is broken out and in great shape.  I used micros, though I saw every form of winter foot gear used, including bare boots.  There are no water crossings although there is a small amount of dribble heading down towards the brook below near the start of the trail.   There are, however, a lot more critters in them woods than most of the other hikes we do!  Tons of deer tracks for example.  One Gray Jay eyed us from Starr King but flitted away at the sight of 5 dogs milling about.  Grade, wind-protection, potential for view, distance, and popularity (implication being "you're not alone") make this a great first or early winter 4K.  One thing of note: from about .5 - .75 mile from the trailhead, we heard a large handful of gunshots.  They were far from the trail but close enough to make me nervous about my bushwhacking dingo-dog who is afraid of the noise.  Can't complain though, another winter 4K in the books, three very happy pups and one exhausted human grateful for amazing friends! 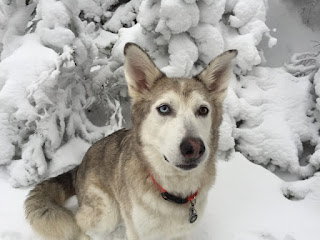