Turning around isn't failing: our attempt at Pierce

I think this blog contains more trip reports of Pierce than anything else at this point.  Yesterday, we attempted to make another ascent but turned around somewhere just shy of the junction with the Mizpah Cutoff.  Keenly aware that most folks are probably reading this particular post to get an idea what the conditions are like for the upcoming weekend, I'll keep my summary mostly in picture form to be more helpful. 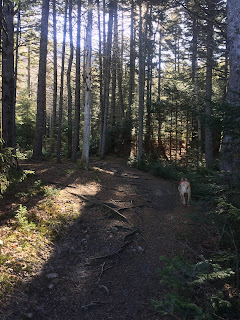 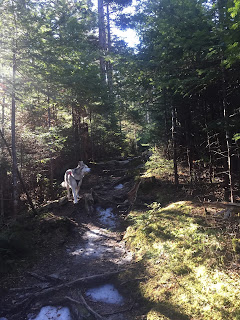 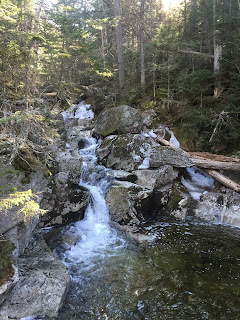 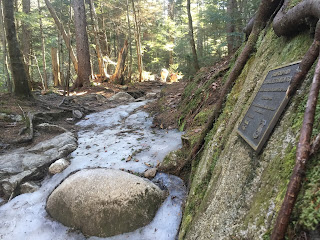 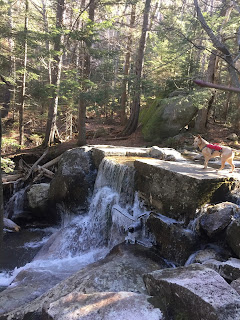 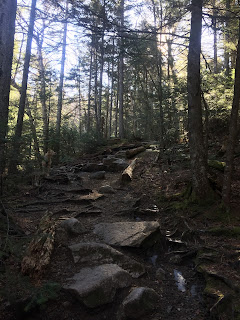 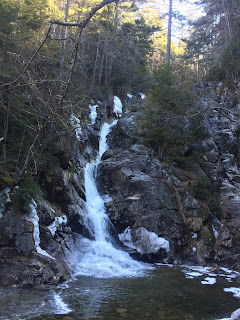 For awhile, I did a lot of donning and removing my Hillsound Trail Crampon Pro's, as there were many sections of dry trail, a couple stretches of avoidable ice, and some icy patches.  I find the Pro's to be easier to fit to my boots than my Kahtoola's and a better choice anticipating that I would be assisting the dog(s) at some point.  During that time, much of the ice was crunchy and sort of safe to step on carefully.

But slowly the trail became more ice than not and very slippery.  The crampons stayed on and I was assisting Tango via his Ruffwear Web Master more than I wasn't.  Ty was completely fine maneuvering the ice or avoiding it in the woods alongside the trail (which was usually an option). Her only issue was that we weren't moving fast enough! 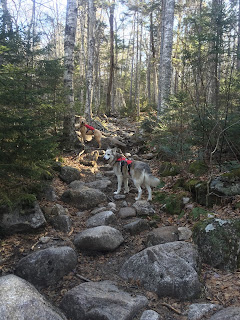 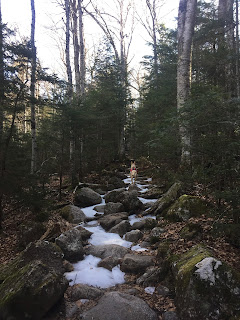 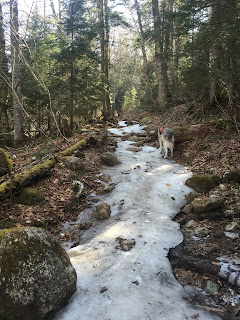 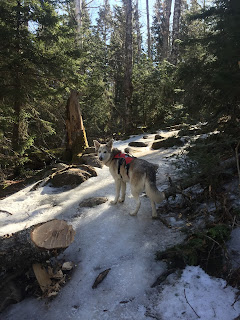 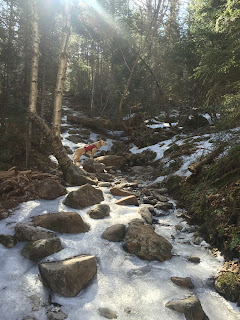 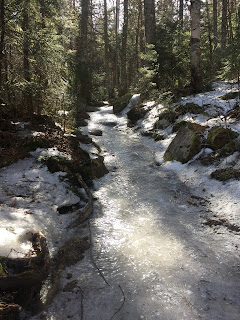 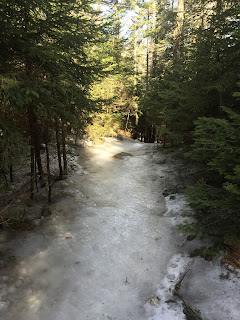 Where the trail was its iciest, it was also pretty flat, even at the point I took the photograph immediately above this line.  Although not obvious in the photo below (sorry for the quality, it's a freeze frame from a video), the boiler plate ice + incline combo bested us.  When the trail began to climb (slightly but enough to make a difference when composed of ice), I called it.  Ty went up and down a couple of times.  She even slipped once and handled it like a boss.  After a few minutes of contemplation, I tried it with Tango.  I was putting in as much effort as he was to get him up the trail.  Bummed but knowing it was the right thing to do, we turned around. 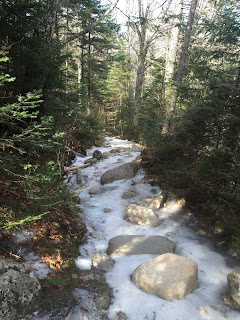 And a fine consolation prize: lunch at Diana's Baths 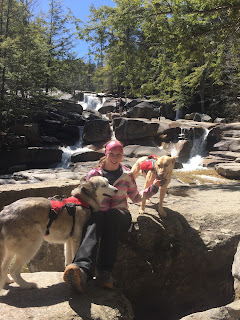 Amidst many other potential and backup plans, I chose Pierce.  Not the winning decision of the day but we still had a lot of fun and bonding experience.  I'm happy with the outcome despite not summiting and honestly, it had to happen.  Next week we planned to do a much more challenging hike.  Had I not seen the conditions for myself, I would have made the mistake of attempting it with other people and their dogs.  Don't get me wrong, Pierce is definitely doable with traction for people (though I much prefer my Trail Crampon Pro's to micros) and the right dogs, it wasn't in the cards for us.  And neither will any other 4K'er for awhile.  We'll be checking off a couple lower peaks on the "to-do list" while we wait for the ice to melt. As impatient as I am to get above treeline again, I'm excited to experience new peaks and trails!