Bushwhacking the Bushwhack: our trip to the Owl

**Note: this hike took place Saturday, May 28th and I wrote most of the report the following day, hence the prolific use of "yesterday" which I chose not to change despite not publishing until Monday, May 30th.

Yesterday was full of stories; I tried to keep my description as to the point as I could but the tales were woven into the description so here goes!

Linda came up for what was planned to be Owl's Head and potentially a night at a campground and smaller hike on Sunday.  I activated and felt pretty comfortable with my DeLorme InReach Explorer from my aunt and uncle and had mapped a route that included the Black Pond Bushwhack to avoid some of the water crossings and possibly the Brutus Bushwhack if we weren't comfortable with descending the slide.

I convinced Linda we should leave around 1:30AM and we were only slightly later than that when we pulled out of the driveway and it was barely after 4:00AM when we set out on the Lincoln Woods Trail. 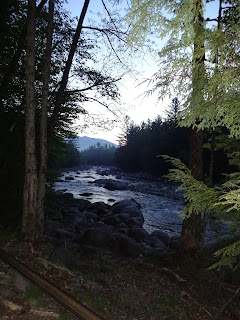 You can check out my recent report of our trip to the Pond and Falls off of that trail for a better description if you're interested.  Its broadness and flat nature were a welcome start in the dark.

The light came quickly and we turned onto the Black Pond Trail a little after 5:00AM.  Just after turning onto the trail, I felt it was okay to unleash Ty but, upon noticing the 3 tents off to the side of the trail (whose residents I probably unfortunately woke up anyway with my loud talking), I opted to put on her e-collar but not her bear bell.  Not two minutes later, she took off and I went crashing through the woods after her.  With Linda not far behind, I cut a straight path through the woods breaking the morning silence hollering for her.  About the time I started thinking we had gone far enough and she'd probably doubled back to the trail by then, she came running up to Linda from behind, looking relieved as all heck and making me think my theory was accurate.  Twenty feet ahead, we were looking down at what looked like old port-a-johns.  We headed down the old trail in front of them in the direction of the sound of water and almost immediately were on the Franconia Falls Trail just shy of the main attraction.
We decided to attempt the Fisherman's Bushwhack at that point.  For awhile, the trail continued beyond the "end of the trail"  and I was hopeful.  But it rapidly became thick and I followed the GPS up a hill into very thick  pines that called for another change of plans.  I chose a spot along the Black Pond Bushwhack .3 miles northwest of our location which made the going much easier as the woods became a little more open and more deciduous (more pliable branches!).  From there we followed a combination of faint pathways and the GPS.  I laughed, after having mused over the validity of statements I'd read online about the Black Pond Bushwhack being easy to follow, when, after descending a hill maybe about a tenth of a mile from the junction with the Lincoln Woods Trail, we hit the very well worn footpath I'd read about.  All in all, our bushwhack from the end of Franconia Falls Trail lasted about 1.3 miles and a quick hour! 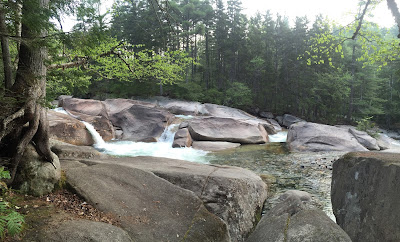 We popped out on Lincoln Brook Trail exactly where I had hoped to from the beginning - mere steps after a water crossing.  It was at that point we met a woman making killer time solo'ing to OH who said the crossings weren't bad and we agreed we would take the official route on the return trip.

From there to the Owls Head Path, which is technically an unofficial trail but is quite obvious, was a combination of gentle dirt sections and some slightly rocky, root-strewn, and very muddy trekking over flat or nearly flat land.  There were two water crossings that went well.  It took a little longer than I'd recalled (we did this peak as an overnight a couple of years ago) to get to the intersection and I began to wonder if I'd led us past it.  Thankfully, a few minutes later, there was a huge mud pit that we tried to skirt around, some gravel I recognized, and the intersection!  There were a few downed trees and rock piles (not quite cairns) marking the spur trail. 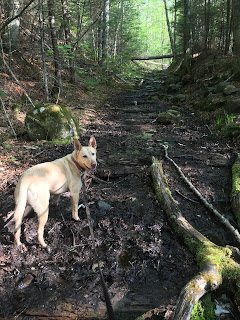 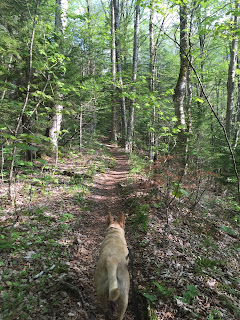 Shortly after commencing, the slide began!  First basketball-sized boulders through the trees then the first open stretch.  It's just sketchy enough to be a challenge and one of my favorites (when the skies are clear) though it can elicit some more wary thoughts in others (while still being fun).  The first section was a lot of loose rock and after a short pass through some trees, a more ledge-y portion was tackled.   If I remember remotely correctly, there were a few more trees before the final exposed section. 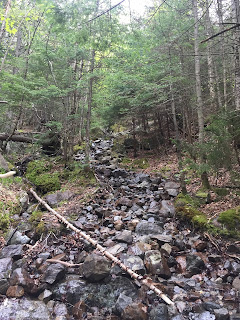 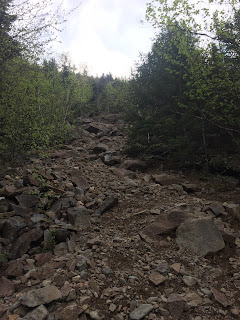 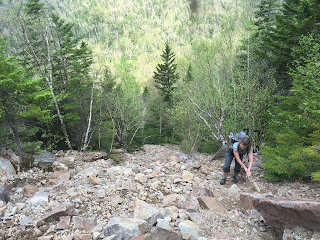 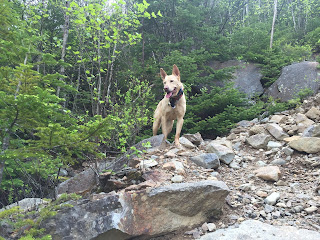 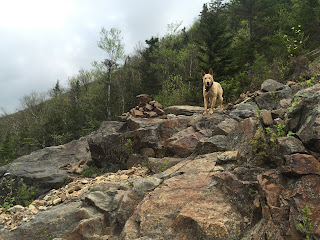 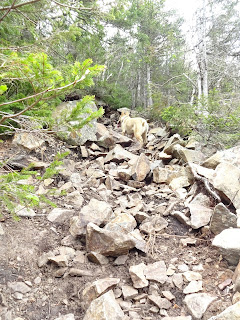 After that, some short scrambles brought us back into the trees but it remained quite rocky.  I realized on the descent that, had we followed Ty to the left, we would've saved ourselves this longer, rockier section. 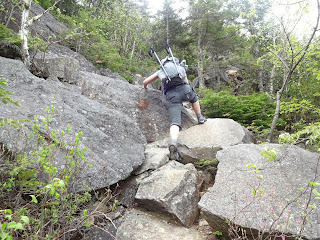 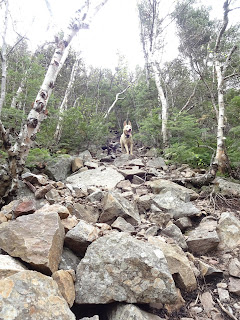 It remained steep and rocky in the trees for awhile and became quite wet with water running down the rocks, making a lot of mud as well.  I'm sure that section was less than a half mile but seemed to drag on. Finally the rockiness subsided.  When it leveled out I knew we were near the "old" summit that I had reached before.  It counted for the 48's but, after learning the truth, it always bothered me that I didn't reach the "true" summit. 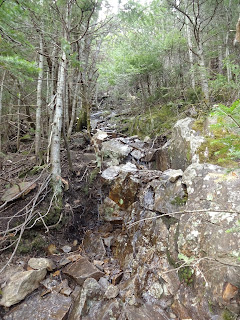 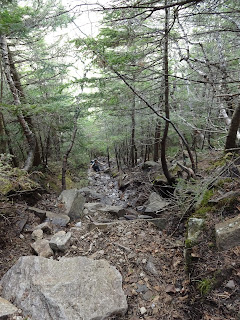 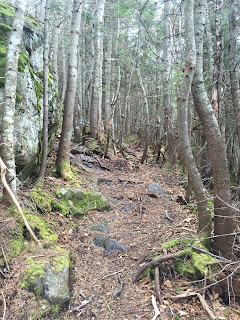 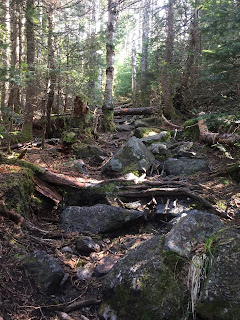 The ridge was lovely.  At the time, we were mildly impatient but it was soft on the feet, had a great vista through the trees of Lincoln Slide, and the sun shone on us.  At the end (there's a little bit of a path behind it but don't pay it any mind) was a cairn against the tree that I celebrated loudly. It felt great to reach the final summit and break Linda's non-summiting streak with her #23!

In spite of the loud black flies, we were able to enjoy twenty minutes up there.  Heading back, we had another unfortunately critter chasing incident that took me by surprise and landed someone back in her harness and leash.  It didn't last long; it just wasn't all that safe, even with the great system we have.  She was refitted with her e-collar and bear bell but I also kept the harness on this time and she was a dream the rest of the hike.  The ridge and rocky portion in the trees went by a lot faster than I thought it would and we took the easier branch down to the head of the slide. 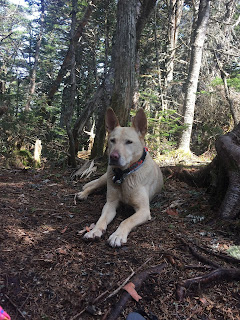 Going down the slide was fun as we carefully picked our way and we ran into Marcy, who the dogs and I had met back in October, as she was on her way up with her group.  It was warm by then and the flies were pretty nasty.  They were mostly attracted to poor Linda though.  Not much to report on the return to the junction with the Black Pond Bushwhack.

Heading down the slide: 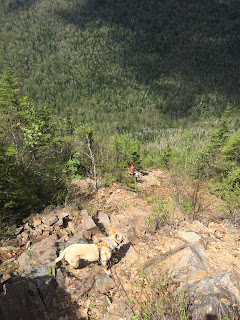 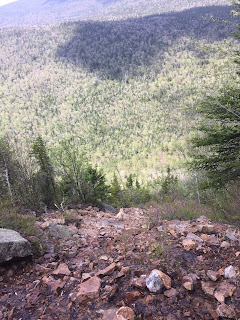 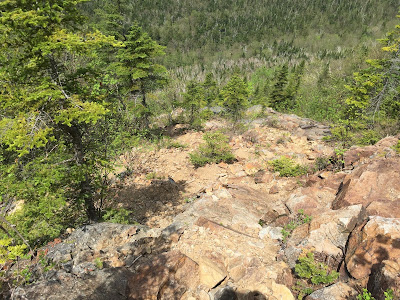 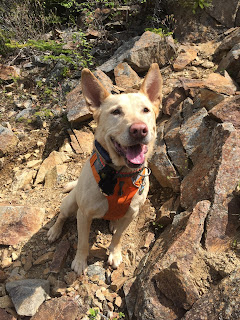 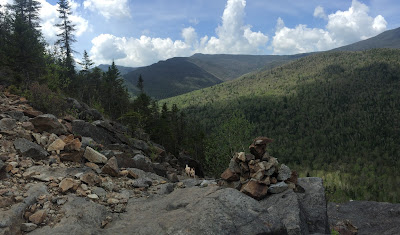 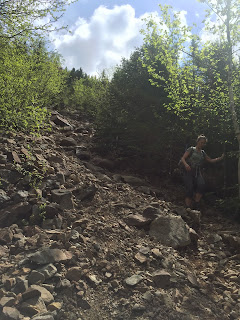 At the last crossing we'd avoided the first time, I managed to fall in just shy of the edge, banging up my knees.  I was happy Ty was wearing her Front Range (no need for the Web Master but the Front Range is great for when she's leashed) because it helped me assist her.  Towards the edge, she started paddling ahead.  I put my faith in her confidence and gave her as much thrust as I could.  I watched her almost get solid footing on a rock underneath the water when her butt started to move downstream.  I panicked like an idiot and reached ahead for her.  Simultaneously, I knew she was okay and I was going down - ouch.  It took me a moment to get up but I hate the thought of a scenario where she puts her trust in me then something happens.  The next crossing was wider and probably as deep (briefly) but went much smoother.  Because we decided to wade through instead of skirt the sides for a rock-hoppable point again, Ty needed assistance.  Linda handed me a trekking pole and we slowly and steadily made our way across.  To her credit, Ty was all set at about 2/3 of the way across.

The final section of Lincoln Brook Trail (segmented by water crossings) was enjoyable but towards the end of the day, felt a little long.  It's a lovely trail though with a forest wonderland quality to it, minus the muddy sections!

We reached the junction with Franconia Brook Trail and took a right for the next 1.7 miles of our trip. It was flat, fairly wide, and heavily wooded along its sides for the most part.  It's a trail Tango would probably enjoy quite a bit if it weren't so far out.  Except for a couple of water bars, there weren't any water sources.  It ended at the edge of the Pemi Wilderness and a bridge just a few minutes north of where we first diverged from LW trail.  And where we hit the tourists.  Honestly, it was an unfriendly bunch overall we were quite disappointed.  Ty was a sport though, moving over to be on the woods side of me every time she was prompted. 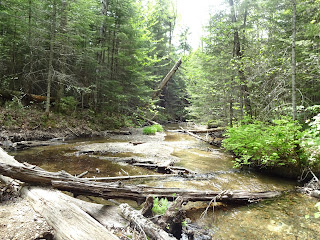 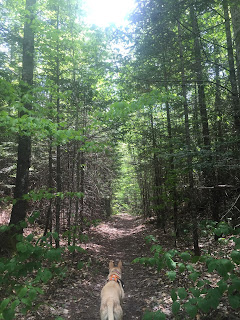 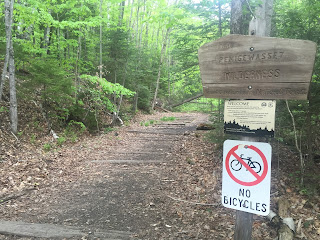 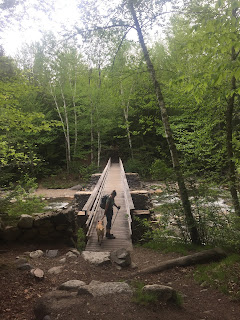 By the time we were nearly finished, our desire to peel our shoes off overrode the urge we'd had for hours to sit in the water so we skipped all opportunities and made haste to the cars, cracked a couple Angry Orchards, and stuffed our faces with chips while our feet dried out.  So that's our Owl's Head story.

It was a fun ride with a little bit of a lot of things that make for a great hike and better memories.  Linda is a saint and a trooper (and the mind behind this post's title!), the GPS saved the day, Ty & I have some work to do, and we got to spend a long day in the mountains - win!  As far as a report goes, it's a long hike for many dogs.  I know a handful that'll have fun for 18-ish miles.  Most of it is flat or nearly so and easy to amble along or power walk (heck, we've even seen a few joggers).  The slide is challenging and fun but I didn't find it too strenuous.  Ty had one or two places where she had to evaluate her options going down but is a natural at navigating the terrain.  It's probably pretty rough on her pads but I imagine no dog who is out there doing that kind of mileage is new to hiking so they should be good.  It's got a lot of water access, some crossings that may be anywhere from a careful, thigh deep wade or rock-hop to impassable (I've heard and I believe it).  Then there's the mud... there was quite a bit of it this weekend and not all of it was avoidable.  Not a big deal but it sure brought the bugs to the trail.  It was a great warm-up for our planned alpine adventures next month!