A Quiet Walk in Evan's Notch 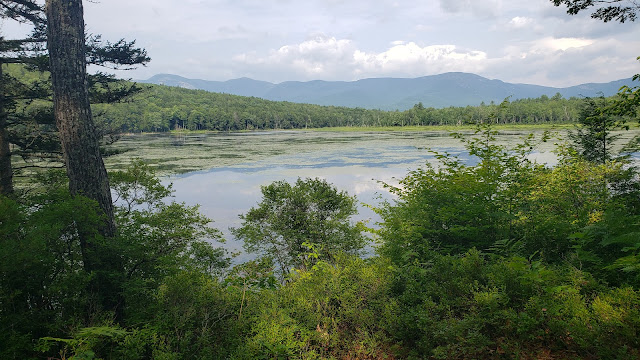 Most walks & hikes in Evan's Notch are quiet! So which one did we take?* Probably a more well known one: Shell Pond Loop.

*This is a mega flashback to the summer, my picture-taking efforts have been weak!

The trail lies almost entirely on private property but corteous hikers are permitted. Parking is down Stone House Road off of Rt 113 in Evan's Notch and there are a few spots just before the gate - though as we left, vans were lining up along the side of the road as well.  We didn't see a soul until the end of our walk but the lot was full when we returned, though I suspect many were there for other hikes: the property also offers access to Blueberry Mountain, a great little hike with a gorgeous view. 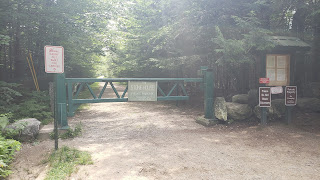 With the heat, I opted for the much flatter option. All hikers begin by passing the gate and beginning their walk up the dirt road. Shell Pond Loop Trail diverges to the right shortly afterwards. It weaves and winds; my first time almost losing the trail was where it seemed to hook left but there was a bridge straight ahead. Continue over the bridge and then to the left to stick with it. The trail then climbs a bit but there were a few small drinking holes for the girls. The trail follows the shoreline of the pond - but not in the manner I'd hoped. It's never reachable on the south side, as the trail climbs into the woods, creating a steep slide to the water. 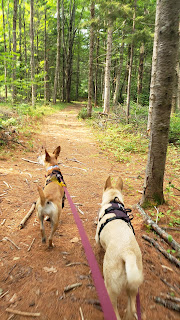 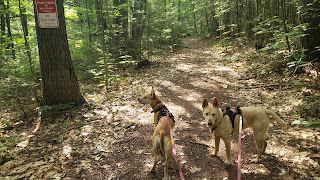 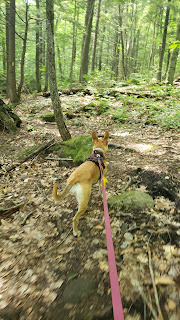 As we came around the east side of the pond and started traveling north, we finally got some good wallowing spots, much to the girls' excitement. It also looked like it could get very muddy (it does shortly afterwards)! There is one spot with a nice view of the pond and a stone bench but no easy access. The girls found where wildlife have parted the brush and enjoyed their last dip in the pond before we continued. 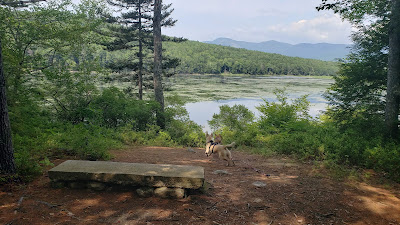 Where the loop turns west, there is an intersection with a trail that leads out to Evergreen Valley/Shell Pond Rd - we kept left but apparently there's a fabulous emerald green swimming hole to the right before the road. From here to the grassy fields, I found some difficulty navigating the trail proper, as it was overtaken with water and the grasses had grown wildly tall. Nevertheless, we linked together the obvious sections until we crossed a bridge and arrived in the field where the trail signs eventually picked back up. 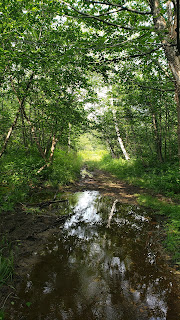 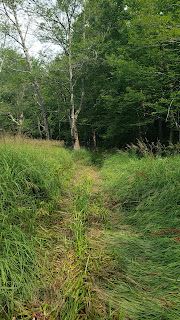 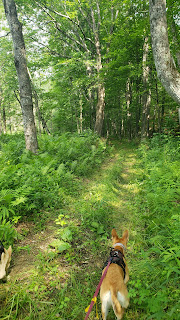 This is where I reeled the girls in from their long lines, as the trail passed by the residences and I wondered if I had erred again. Looking back over the photos, we were on the right track... which also serves as an air strip.  All's well that ends well! 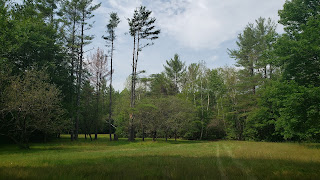 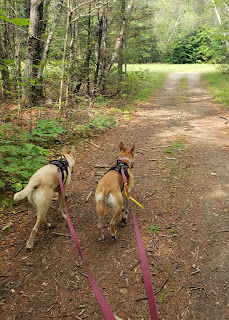 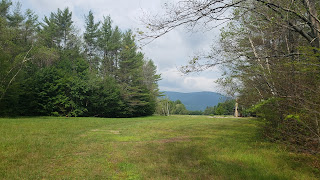 After the pretty but scorching walk through the field, we enjoyed the partial shade of the road and final small stream/water opportunity for the girls before returning to the car, which was no longer alone in the lot; the early bird gets the empty trails - again!.

While there's nothing particularly outstanding about Shell Pond, it is an undeniably enjoyable walk in the woods. Different sites put it at 3.4-4.0 miles in length. The trail is wide and easy to maneuver, the girls found ample water to stay hydrated, and there was an intriguingly wild element to navigating the flooded north side of the trail. I recall thinking the loop would be a very nice snowshoeing location - if the road is open in the winter. In the moment, it was also perfect for walking with Arya, who continues to improve in her reactivity but sometimes it's nice for all to simply walk without any triggers or training! Others may use the beginning of the trail as a means to an end (Blueberry Mountain); we were more than satisfied with our walk around the pond and its limited but very Maine-y views. 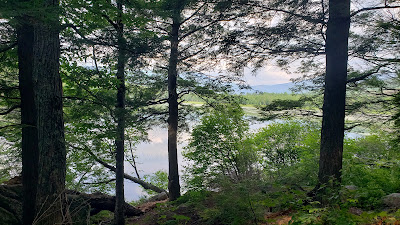