A Pack Hike to Galehead

Galehead – 4,024 feet of elevation that I never thought I’d revisit but did so happily on Saturday.  I introduced Molly (fka Rayne) in my post about the Zealand Falls Hut.  Since then, she was quickly adopted, hiked Mt Crawford, and was ready to up the ante.  Her dad and I discussed what was left on his 48’s list and what would be an appropriate hike for the pups, settling on Galehead.  My recollection told me it was on the longer side (10.2 miles round trip) but less demanding than the others we were considering. 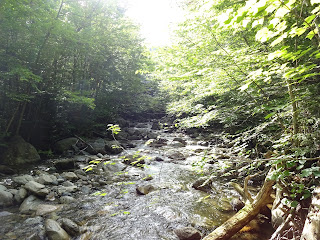 The reunion at the trailhead was something I rarely get to be a part of and put a huge smile on my face (and a few pawprints on my shirt!).  We headed into the woods a little after 8:00 at a decent pace thanks to the initially mild elevation gain and relatively good footing (mostly dirt, increasing roots and low rocks as the trail progresses).  There was plenty of water for the dogs and several easy crossings (mostly step-overs).  Aside from one steep section towards the terminus, the Gale River Trail has one of the most even and moderate inclines of the NH Four Thousand Footers.  The terrain becomes increasingly rocky but we lucked out after a rainy week and enjoyed dry trails where it counted.  Don’t worry, the dogs got plenty muddy on the lower sections! 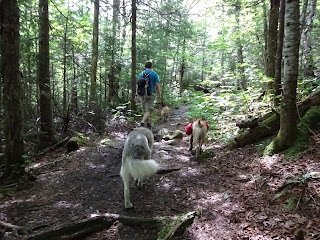 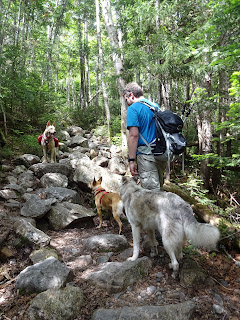 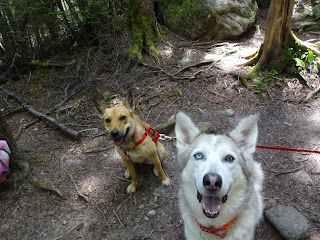 At the intersection for the Garfield Ridge Trail, we took a break and met the first of the many flies we would encounter throughout the hike.  The trail then descended briefly before heading up to the Galehead Hut.  This one is a favorite for the broad “front yard” and views of the Pemi Wilderness and what we believe was West Bond.  The other hikers there had many stories and love to give the dogs.  We hung out for a bit, tucked away our packs, and headed off to the Frost Trail for the official summit.  It was glorious to be pack-less and the walking was quick.  We did our obligatory summit photos (#1 for Molly and #25 for Dan!) then turned around.  There’s a viewpoint along the way that we stopped at and the dogs had great fun leaning over the edge.  Molly then plunked down and whined the “let’s go” pout.  I nearly fell over snickering at her, pathetically squatting in the dirt and acting so much like Ty. 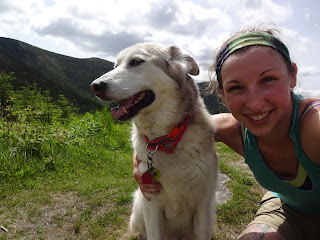 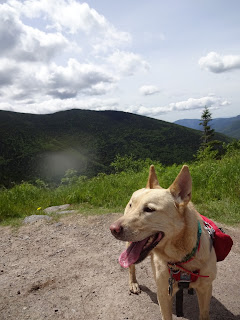 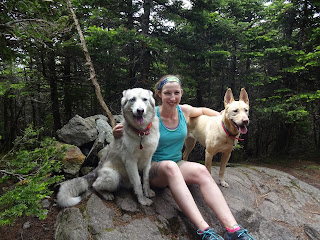 Back at the hut, we continued to enjoy the beautiful weather on the porch while the dogs shamelessly garnered all the attention they could.  I even passed my card out to a couple of folks who might be looking for a four legger to accompany them on hikes!  I’m always grateful for the welcoming nature of other hikers with the dogs.  The rule of thumb for us is “don’t greet until I give the okay and for dog’s sake, don’t beg!”  That usually goes right out the window because many hikers return the dogs’ enthusiasm for interaction.  It’s still important for them to listen and not be obnoxious though, as we have met dog-wary hikers and it is always humbling when they compliment us on their manners or tell me not to worry about letting them wander due to their calm demeanor.  There are not many places left to allow dogs off leash so we do our best to make a positive association between dogs and trails.  The other dogs we met were also awesome hikers! 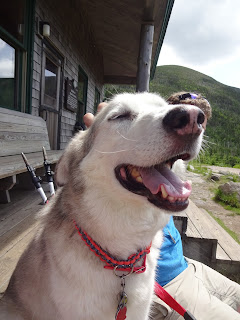 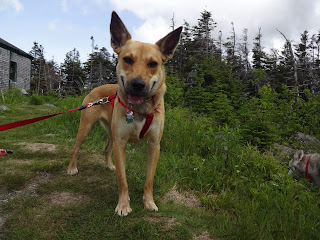 After the hut, the story is all downhill ;) We loaded up and headed down, stopping on occasion to enjoy the running water (read: wash dirty Miss Molly!).  The downhill trek passed as quickly as the climb and we were back at the trailhead around 3:30.  (When we were moving, it was at a decent pace but found many reasons to stop and enjoy!)  As much as I suggested this hike for its trail qualities, the big takeaway for me was the interaction with others.  I am very fortunate to keep in touch with many of my adopters and get to see some of my previous fosters on rare occasion but never have I gotten to hike with one with her new family.  For a dog we fell for – hard and fast – it was very special to see her again and see how bonded she is to her new dad.  I was also blown away by how many folks from the Facebook hiking groups we met today.  In the past, we might’ve met one or two, if any, but Galehead's numbers exceeded all past hikes!  The hiking community is big and welcoming and it’s a cool feeling to put faces to the profiles.  The dogs even made it into other hikers’ posts! 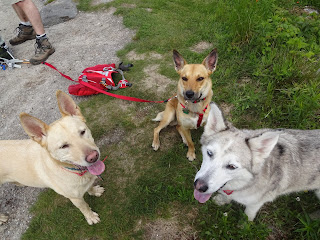 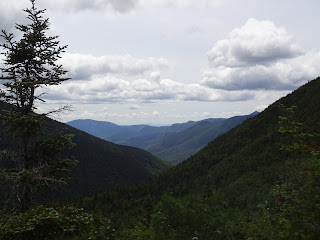 As far as paw-friendliness goes, this is high on my list for 4000 footers.  The distance is on the longer side for a single peak but the mileage, while rocky, is moderate by comparison.  The other pluses are the amount of water they can access freely and the hut.  I showed Tango that I've learned to hike his hike - plenty of mini breaks and quick massages, extra treats, and stopping every time we passed running water so he can decide when he wants it.  He seemed to genuinely enjoy all 10.2 miles, as did Molly for her first big hike, and, never questionable, Ty had a blast.  That being said, now knowing Tango will enjoy our upcoming Bonds trip (~20 miles), we’ll be revisiting a
shorter summit for our next adventure!
Posted by pawsonpeaks at 9:56:00 PM