A Weekend Away: Mount Garfield and Jigger Johnson Campground 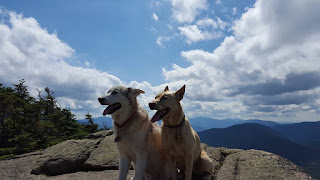 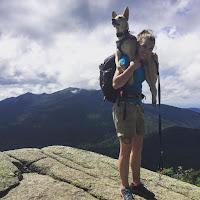 This past weekend was intended to be our second attempt at an overnight trip to the Bonds but we scrapped it again and instead decided to hike Garfield then spend the night at a campground.  Our hiking party included Linda, Liz, Dan & Molly, and our new foster pup, Piper from Saving Carolina Dogs.  I had spent the week fretting about the heat, Ty's paws, Piper's youth... but in the end decided everyone was coming. 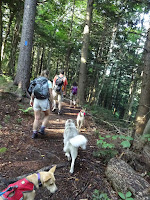 We hit the trail at 8:15, Ty and Molly streaking off ahead with Tango in tow.  Early light filtered through the trees and the dirt trail made for easy walking.  It continued as predominantly dirt over the first water crossing, which was shallow and easily traversed over stepping stones.  Piper was unsure and got a little lift to get her started.  After that, she was a pro!  If memory serves me correctly, there were two additional water crossings, all shallow and easy, even after the previous day's rain.  In a couple of places, the running water and trail briefly ran together. 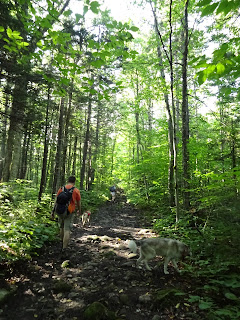 After the trail left the sounds of running water behind, it climbed gradually and the trail became much rougher.  This is where my description is likely to become skewed, as this is when I started carrying Piper off and on, affecting my perception of the hike's difficulty. (This was done due to her young and still developing bones, not because she was tired by any means!) My recollection of this hike was that it was fairly easy, that we had done it in less than five hours, including nearly an hour at the summit.   But carrying a six month old Carolina Dog puppy is not quite the same experience!  Rocky sections were interspersed with nearly flat stretches of dirt trail, for which I was grateful.  It never became very steep; carrying Piper was extra work but never exhausting or difficult.  At times, it was broad (two people wide) and showed evidence of its former use for some sort of vehicular travel (I heard tractor somewhere?).  The slowly winding switchbacks also lend to the trail's easy grade. 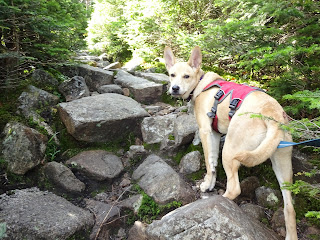 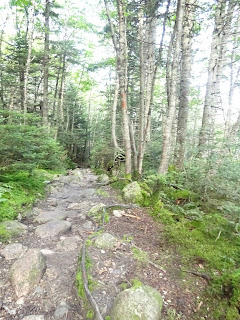 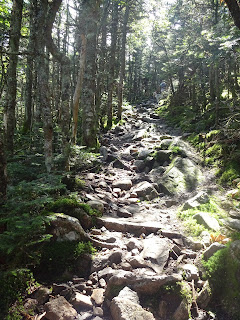 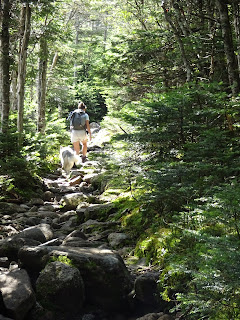 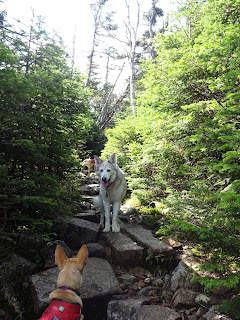 Shortly after the intersection with the Garfield Ridge Trail, as warned in the guidebooks, it became steep and hands were helpful but not necessary for climbing over waist-high rocks.  Little Piper wanted to do this section on her own and so, with lots of aid from the Web Master's handle, she scrambled her way to her first four thousand footer!

The summit was fairly busy, and for good reason; the views were stunning.  I spent plenty of time spinning around and I still don't think I took it all in.  I definitely didn't get enough photos, as if they could do justice anyhow!  What I wish I spent more time doing is trying to identify surrounding peaks.  Off to the right, Franconia Ridge was obvious and I was amused by the singular mound that is Owl's Head.  (Owl's Head is a remote and generally not well-loved 4000 footer that we had some interesting experiences on.)  After some time, we migrated to a large, flat, exposed rock slab that made a perfect seating area just below the summit (on the other side of it) where we had a little more privacy/less distractions (read: opportunities for the dogs to go begging strangers).  The tentsite (and a shelter?) is somewhere in the vicinity but I forgot to look for it for future trips. 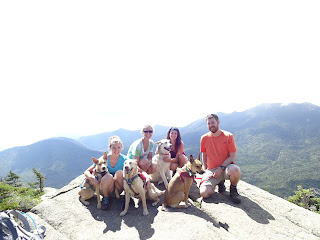 At our semi-private viewing area, we snacked, took photos, and met some other hiker dogs.  Not until later did I realize it was blissfully bug free as well, something I promise not to take for granted again!  Piper even climbed inside a spruce for a nap before we loaded up and headed down.  The rockiness presented some challenges, whether I was carrying or being pulled by Piper but all went well and we were able to jog to catch up to the group on several occasions. 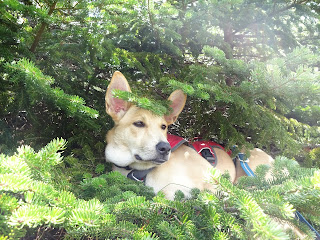 At some point, Piper and I fell far behind the humans but Ty, Tango, and Molly returned to escort us back to the trailhead.  They were perfect guides for Ms Piper, who did phenomenal in her own right and was the first to fall asleep in the car. 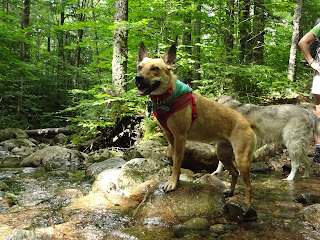 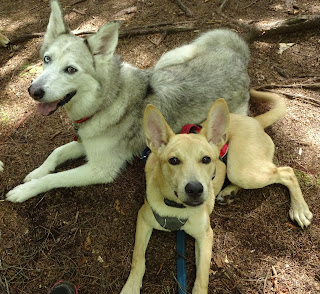 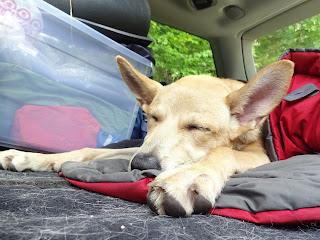 As this was meant to be a weekend camping, we had our tents and sleeping bags ready and opted for the nearest campground I had a vague familiarity with: Jigger Johnson on the Kanc, just west of the intersection for Bear Notch Rd (closed in winter but offers spectacular views and also beautiful for fall leaf peaping by the way!).  To my delight, the campground had more of a laid back celebratory vibe than the quietude of start of the season, as it was last time we visited when I was much more paranoid about any little noise the dogs made.  This time, there were lots of dogs being walked, cornhole bags being tossed, and one droning little vacuum cleaner. 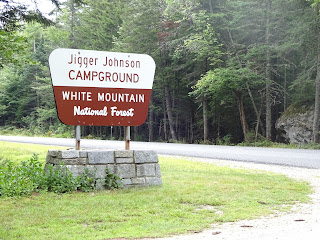 After picking up "essentials" (Woodchuck cider, hummus, chips....) and doing a quick, bare bones setup, this was a great way to relax and still be in the mountains.  The dogs were comfy and sleepy, as were we and after looking through the day's photos by the fire, we were all asleep within an hour of sunset.  I had the girls in my tent and after a short lived coup during which they seized control of my sleeping bag, we were in our rightful places and even the alert little dingo ladies slept well until the pre-dawn 5 o'clock hour.  We had all left the rain flies off to see the stars. Our experiences varied we but agreed it's getting quite cool at night despite it being August.  With the pups still tired/recovering, we were able to stop for breakfast and an errand before heading home, happy to have spent the better part (and best weather) of the weekend in the Whites. 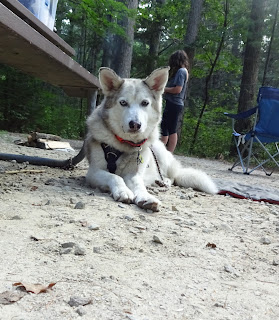 At the time of this post, it costs $24 per night for a site plus $5 for an additional vehicle.  Info can be found here.  Sites are all within a reasonable (30 second - 5 minute walking distance) of a potable water spout, bear-proof dumpster, and toilets.  (FYI the bathrooms are flush toilets but do not have soap or lights so bring your hand sanitizer and head lamp at night!)  Sites are big enough for RV's and it's obvious some folks spend an extended amount of time camping.  Our spot fit our two cars and three tents with plenty of room to spare, really enough to throw a football around, had we brought one. Each site also includes a fire grate (3 configurations for grilling or roasting marshmallows) and picnic bench.  Being wooded sites, there were plenty of places to tether the dogs (they have begun to learn how NOT to entangle themselves) but we got lucky and there was a clearing in the tall pines where we set the tents up for stargazing.