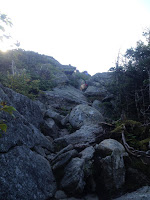 This one's for the folks who are contemplating Caps Ridge with his/her pup and are doing their due diligence.  Hopefully I can help provide some insight and details, which I found can be hard to come by online.  Also, because it was a badass hike!

The day before, I had to wrap my head around the fact that we were leaving Tango at home with Erick for the first time but I knew it was the right decision for him and Ty and I would not get another chance to do a challenging hike like this for awhile.  Encouragement came in the form of a new piece of gear to test from Backcountry K-9: Ruffwear's new Web Master Pro and we needed some scrambles to test it on (full review to come). 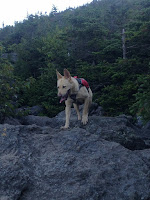 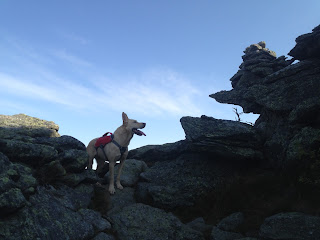 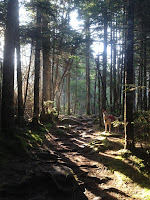 We arrived early, hitting the trail just before 8:00 and in a good position between other groups.  It sounds silly, but I prefer not to be the first up the mountain ( let others awaken and shoo away the critters) but I like to be well enough ahead of others for me and the dog(s) to get into our groove uninterrupted.  I hadn't done much research on this one aside from scouring the interwebz and asking a few guardians of experienced trail dogs about the caps.  The trail began rougher than I anticipated but probably only because most of our recent hikes have had easy beginnings.  The trail was rocky and covered in roots and Ty was already hauling butt.  By the first viewpoint of the day (below), the trail surprisingly mellowed quite a bit. 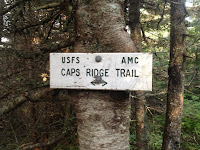 Shortly after the intersection for The Links, the trail became a trek over boulders.  Frankly, I found one section to be tougher than most of the caps!  My heart was starting to skip as views began flooding my field of vision.  We went up and over the first cap and as I looked up the second cap's steep face was already staring us down.   (It was the only part of the hike I had tried to research at length and it looked like a sheer rock wall in the pictures and videos).  Ty doesn't much care how the trail changes, so long as there's trail, she's moving.  She scooted up the right side of the first pitch, met me halfway up, then led the way to the top of the second cap.  It really was not as steep as I thought it would be based on photos online and we were quickly moving on. 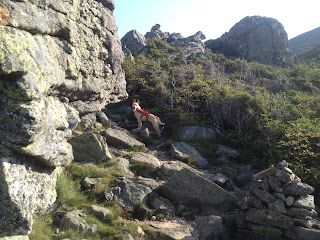 From there and over the third cap, Ty let me lift her a couple times to test the handle of the Web Master Pro but she was able to pick her way on her own.  I wish I had more to report, but the story is in the photos.  The views were spectacular and the trail is rocky but not intimidating and I had to press forward; Heathen Dingo was "in the zone" as another hiker noted later on. 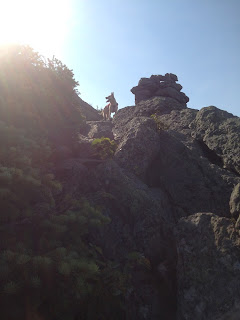 We climbed the final little rock pile of the summit where, strangely Ty had the most issues of the day picking a rock to stand on.  (It's very rough and narrow with not much guidance on the official "trail.")  She was really aggravated for the subsequent half hour or so while I walked over to the junction where Tango had taken a nap the last time we were here, almost exactly a year ago with my brother and while I hemmed and hawed about which way to head back down.  I tried appeasing her with kibble in her water and Cliff Bars but she scarfed it all down and continued pouting. 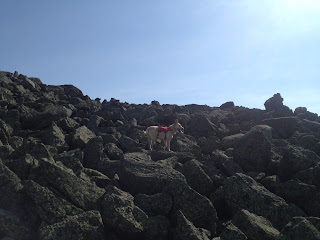 We could have gone over Gulfside and down Jewell, about 6 miles including the Boundary Trail and road walk but the assumed payoff was more time above treeline on such a gorgeous day and potentially less abuse on Ty's pads.  But Ty was hot as it was and it was just a hint further of a distance than I was interested in doing with no guarantee Ty's paws would be less at risk for injury.  I opted to go back the way we came, which Ty was completely fine with. 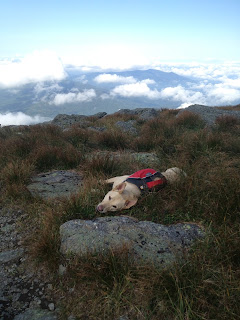 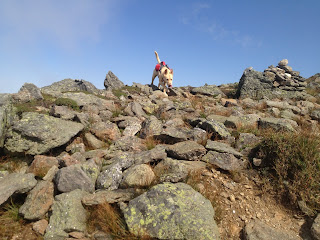 Going down was enjoyable but not quite as fun as heading up.  The heat of the day was on us and it took about the same amount of time due to frequent stops for ascending hikers to pass.  It did, however, give me more opportunities to assist Ty.  She was typically indignant but permitted me to help her.  We have a system.  I say, "wait" and get where I need to be, give her a little trust pep talk if she's wary, and count up to three.  On three I lift and she jumps simultaneously.  Usually it goes pretty well!  She garnered lots of compliments, whether it be on her trail adeptness or manners and it was a really special day for me to be out there with her.

Overall, the descent is not unlike most other descents.  I only butt scooted in a couple of places, the two requiring the most caution being the steep wall of the second cap and near the beginning of the boulders (descending: after the first cap).  Unfortunately, Ty also scooted down the steeper rock faces and finished the hike with a small raw circle on each of her two front paws (despite absolutely no wear on the way up).  She only showed discomfort when we reached the parking lot, which was overflowing.  I cranked the A/C and we headed out.  We shared a Dunkin meal and she passed out, eliminating my idea of stopping at a river for a few minutes.  When we returned home I didn't get so much as a "how do you do" from Tango, who was too busy working on one of my awesome frozen treats.  His reaction and Ty's reaction to the heat confirmed beyond a doubt I did the right thing by leaving him home and that he was okay with it.  And I got a very special hike with my best girl.

I'm trying to choose my words carefully in my recommendations for other dogs, not over- or under-playing the challenges.  If your dog is a confident (mountain) hiker who has been above treeline before, with proper pad protection (pre-moisturize with a product like Musher's Secret and boots, wrap in the first aid kit), s/he'll probably excel.  That being said, your pup should enjoy scrambles.  Tango would've done it but wouldn't have had fun like Ty did; he would have just gone through the motions.  If you're in tune with your dog and ready and willing to take as many breaks as s/he needs, check paws, and turn around if necessary, go for it!  I want to stress that I don't recommend this one as a dog's first time above treeline or scrambling because that's the heart of this hike - scrambles and rough, alpine stone.  Their paws need to be conditioned to the inherent roughness of the Northern Presi's.  I had a heck of a time finding much (except from a couple very helpful folks in a FB group) regarding dogs on Caps Ridge and, while I cannot profess to know your dog's skill, abilities, and trail interests, hopefully our narrative can help you decide whether or not to go for it.  Happy Trails! 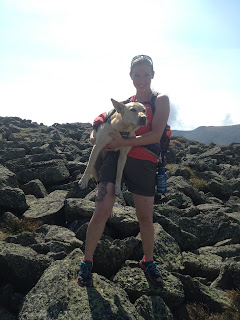