Tecumseh with Fall in the Air

This past weekend, we spent Saturday doing the Osceolas with Linda, Dan, and Molly.  Then Linda, TybTangs, and I spent a relaxing  evening and rainy night at Waterville Valley Campground.  Sunday morning we hiked Tecumseh for Linda's #19. I'm doing this post in completely reverse order since I knew I didn't have as much to say about the small but gritty Mount Tecumseh and could get it published quicker than the rest of our weekend trip.

After a slow start and stop in town for water (we weren't digging the campground's water), we eventually (10:45AM) hit the Mt Tecumseh Trail. Our original plan was to go back up Tripoli Road and start on the other side after reading some comments about its enjoyability but we were so close to the ski area trailhead that we changed our minds.  It started out pleasantly enough and in line with many of my memories from the other time we hiked it - in mushy, changing-seasons conditions where the lower part of the trail was bare or lightly covered in slushy, melting snow and further up was snowshoe territory.  The dogs had plenty of water to access and, among all the bright green leaves showing off in the sunlight the forecast hadn't predicted, there was preliminary color change in some of the leaves!

At approximately the one mile mark, there was a small drop down to a water crossing (easy) then back up.  Shortly after, we reached the view (noted by a sign) to the left of the trail that led us onto one of the ski trails.  It must've been a black diamond because, dang, was it steep!  Great view though and Ty was loving the thick brush. 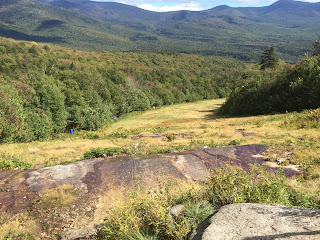 Immediately after the viewpoint, the trail's personality changed.  It's rock.  And it didn't stop being 90% rock until less than a half mile before the summit, and even then only briefly.  It's possible that this is the first peak I cared for less the second time around, hence the drastic difference in tone to the trip report! 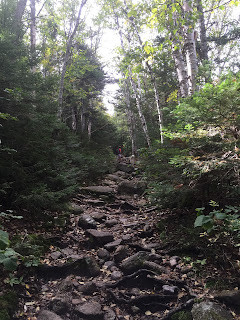 The trail maintained a fairly steady, moderate pace.  The rocks were not the big guys you have to hoist yourself up but the head-sized ones that characterize the Whites, although Linda and I agree, out of the 19 4K's she's now done, this was the rockiest.  It didn't offer many breaks either, so we were grateful for the gentle wind, weather in the 50's, and brevity of the path.  What perhaps got us the most was that, more often than not, when we looked ahead, we could see rocky trail as far out as we could see.  Eventually, as we looked up towards another long corridor of rock, it was obvious the next set was a staircase.

Then began the hike of a million staircases.  There must've been over 100 steps built into the ground over several separate sets.  We were mesmerized and utterly impressed and grateful for the work done by others. 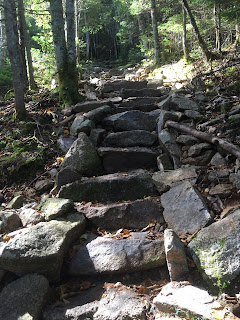 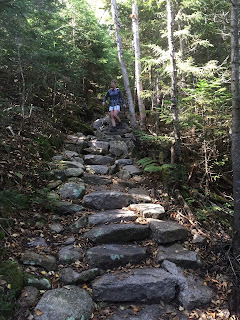 Eventually, the trail evened out, offering easier footing, and we reached the junction for the Sosman Trail.  From there it is was .3 miles to the summit over both dirt and rock, some of which we later sat on to descend since they were a bit damp. 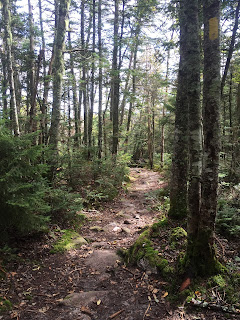 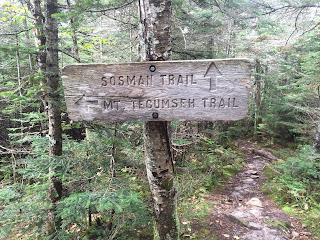 The summit is small with a view I wanted so badly to enjoy.  Unfortunately, it was made possible by illicit tree cutting, which was hard for me to get past.  We hopped off the top of the summit rock to enjoy a little protection from the wind and eat before turning back. 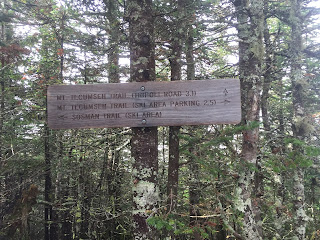 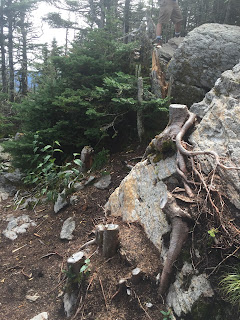 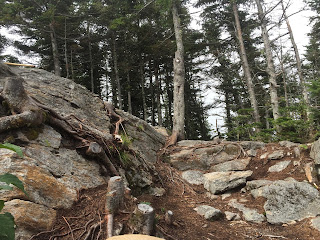 As usual, not much to report from the descent, although it was much more enjoyable!  The dogs especially loved our pit stop at Olde Waterville Pizza for lunch before heading home! 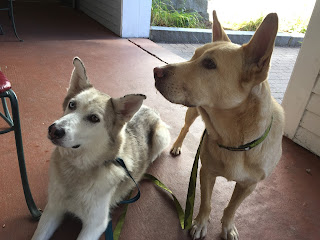 As far as paw approval, I believe this one had its ups and downs. It is on the shorter side, only 5 miles roundtrip with moderate gain (2300 ft).  Water was fairly easy for the dogs to access, at least until the viewpoint.  It may be helpful to some that, more often than not, we could see dogs approaching from quite a distance.  Ty and Tango are social but for those who need to pull their pup aside, that may be a bonus.  Tango was not a huge fan of the rockiness since it asked more of him than a dirt or root-covered trail but the first mile he thoroughly enjoyed, as well as going down.  There were no places where they needed assistance or any technical sections; it's quite straightforward.  Despite Tecumseh being frequently suggested as a first or early 4000 footer hike, I think we'll stick to recommending Pierce (just bring your 10 essentials)!