I freely admit I have fallen woefully behind in my trip reports.  Alas, we did two of the most popular 4000 footers (Osceolas) almost two weeks ago and still no report!  I have been spending a fair amount of time blogging for my employer as of late and for anyone interested in more day-to-day pet care topics, please check out my recent posts.  Nothing in-depth, just brief  overviews of contemporary subjects in hopes of encouraging pet guardians to broaden their knowledge a little!

Today's chosen route was the result of much research and consideration.  Our friends Vanessa and Jared were seeking to complete a 4000 footer that neither of them had that was also dog friendly.  The weather is still too warm to ask much of Tango, their pup Tank would be leading the way and his love affair with hiking is coupled with arthritis, and their friend Steve would be accompanying with his trail newbie, Bones.  While on the longer side, much of this route is not too demanding, was agreed to be the easiest of the options, was a nice way to do an often less-than-favorite summit for many peakbaggers, and left Zealand to hike via Zealand Trail in a not-yet-scheduled Bonds traverse.

The team was running late, and strangely, I was early.  It gave me the opportunity to do something I'd been wanting to do for awhile.  As one drives down Zealand Road, the river runs alongside.  It has an allure to it that left me regretful each time I passed by without stopping.  We finally did and it was magical; we could've stayed all morning but it was pretty darn cold and Ty had grown bored of the Chuck It ball and was squeaking closer and closer to the other side of the river.... 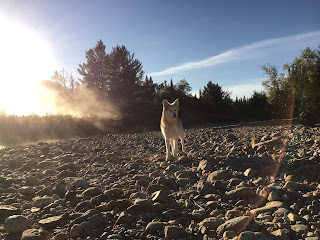 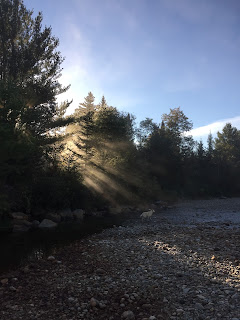 Hale Brook Trail
My recollections of Hale were less than gushing.  In fact, I believe my prior feelings about the Hale Brook Trail were more akin to my new emotions towards Tecumseh.  Last June, it was hot, I had a cold, and it seemed an interminable (yet moderate) drive upwards.  Perhaps it was the cool air or all the wagging tails but I immediately had a good feeling about revisiting this peak.  Conversation was light and we trekked at a relaxed pace over moderate trail conditions.  The terrain began as hard packed dirt and and slowly mixed in roots and rocks, ever so subtly increasing the grade. 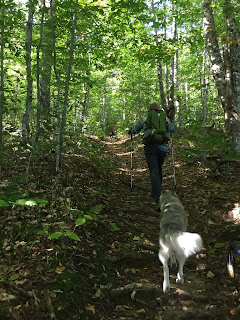 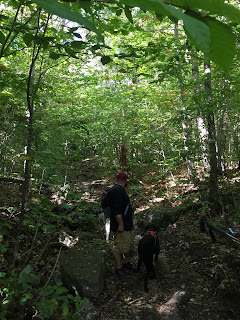 By the time we passed the first brook crossing after about thirty five minutes, the temps were warming but the trail remained moderate in both footing and grade until we crossed back over the same brook (with much weaker flow) another thirty five minutes later.  At that point there were a few rocky, slightly steeper switchbacks that eased up after twenty minutes of ambling. 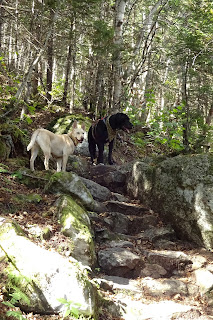 Around that time, there was a nice view through the trees facing left.  We stopped for a moment and Ty continued ahead.  As we wrapped up our break, the Heathen Dingo came back to check on us, sans collar.  Bummed out and grateful for all the help, we searched the brush to no avail and continued on.  A few minutes later, we walked onto the open summit.  The cairns had been rearranged in the two years since I'd last been up there. 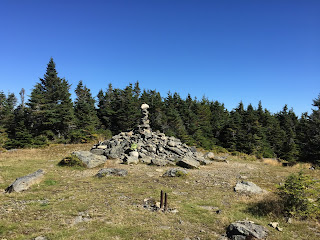 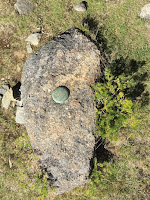 It took almost two hours and twenty five minutes to reach the summit and we spent another hour enjoying what was possibly the most gorgeous day ever.  Tango lent Ty his ID tags and Tank let his little mistress borrow his KCCO collar.  KCCO stands for Keep Calm and Chive On.  Ty interpreted it as Keep Calm and Chase On.  She hardly spent any time with us at the summit while the boys opted to stretch out in the grass. 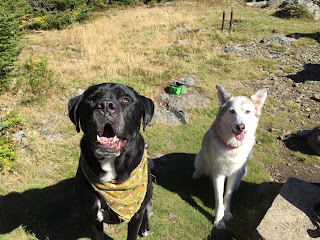 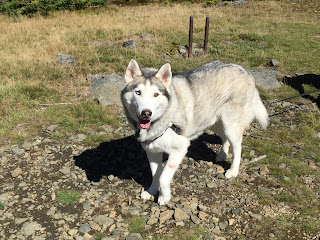 Lend-a-Hand Trail
This is the point at which I lost all track of time (date stamps on photos are my friend!).  It was hard to store numerical factoids when my brain was trying to cram in all the beauty and keep tabs on Ty.  Lend-a-Hand was a little rougher than I remembered but a very enjoyable hike with some brief rocky descents that were followed by a very well placed set of bog bridges.  It was great to have so much water access as the day progressed.  Eventually we reached the junction for Twinway and I veered right momentarily, knowing there was running water heading towards the falls and a pool carved out of the rock perfect in size for the dogs.  After that, the smell of food was in the air and in no time we were at the hut.  From Hale to the hut took us about an hour and forty minutes.  (I'm subtracting ten minutes for when we realized Ty was not ahead of us as we thought and, long story short, we learned the poor kid had run back towards the summit looking for us.  After retracing steps, it didn't take long to reunite and continue on.) 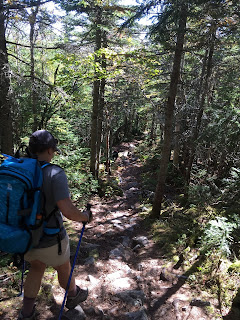 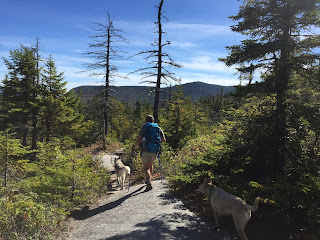 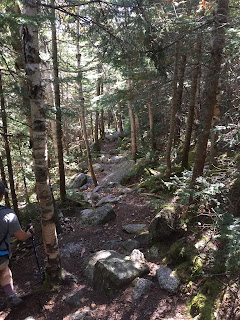 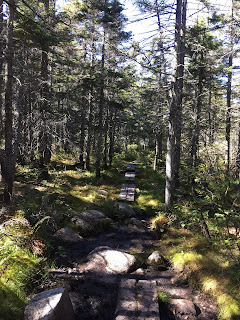 Zealand Falls, Hut, and Trail
The falls were beautiful but very populated with families.  We ventured over to the hut where Jared snagged a few new patches and Ty accomplished a dream three years in the making: she entered the hut.  I know, I know, bad human! Ty was a wiley woman today and she had to carry out one last big stunt. 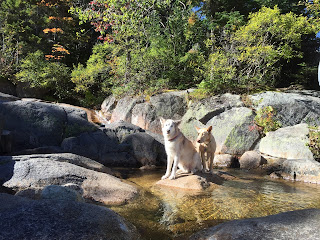 We picked our way down the .3 mile rocky drop back to the Zealand Trail, for the first time, finally following one of the herd paths to view the falls from below.
I've already described the Zealand Trail at least once and it is 2.5 of my favorite (and easiest) miles in the Whites.  The trails are great for Tango (and other tired pups like Tank and Bones!), broad for group hiking, provide beautiful views over the ponds, and one final beautiful river view before slowly inching away from the Zealand.  Within a mile of the trailhead the footing was a little tricky when damp then became a straight tunnel through evergreens flat enough to sprint on.  It took less than an hour and a half to walk down to the first Zealand Trail parking lot. 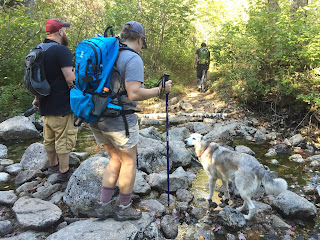 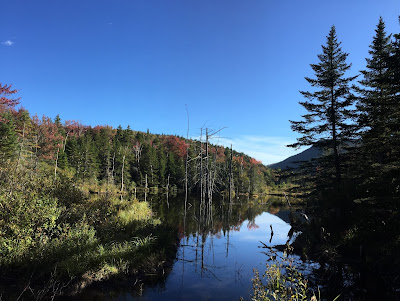 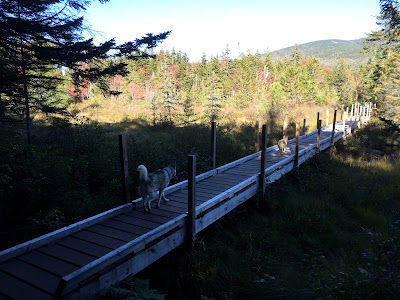 Wrap-up
Jared jogged ahead to our Jeep to give anyone interested a lift back.  Knowing that'd be a lot of dog for one car, TybTangs and I picked up our pace.  I quickly questioned my decision.  Ty wanted to catch up the Jared, making me  wish I'd leashed Tango and handed him to Vanessa and Steve so he wouldn't have felt compelled to run with us.  He surprised me with a very willing and coyote-like trot for most of the mile/twenty minutes down to the car.

They got their treats... and then some cupcakes.... Hike days are extra salmon oil and junk food days!  Ty could've kept going, Tango only stood to beg and then got comfy in the car like the rest of the boys.  Even my knees were a little sore so my guess is that they felt it too.  I give this hike points for being a great way to keep the mileage in the single digits but extend Hale from the 4.4 mile in-and-out it usually is.  It was interesting to be doing so many miles of 'down' after only 2.2 miles of 'up.'  The temps, though only in the low 60's at the very warmest if I had to guess, was still a little much for Tango but, with some breaks along the way, they all fared well.  This was Bones's first hike and he gradually wore himself out.  Picking his way down the short, rocky drops on Lend-a-Hand was a challenge that he accepted with determination.  By the bog bridges (around 4.5 hours in), Steve said he was pretty spent.  The positive effect was that his tolerance for sharing "his" items increased as he was too tired to care!  Long but enjoyable with moderate trails and plenty of water (but be aware, the ponds are inhabited by giardia-carrying beavers), we'd recommend it for active pups and their humans!
Posted by pawsonpeaks at 11:13:00 AM