Glen Boulder (3729')
Glen Boulder Trail 3.2 mi round trip, possible to hike well beyond the boulder to a number of peaks
Elevation Gain: 1754 feet
Duration: approximately 3 hours and 10 minutes.  We spent some time wandering past the boulder and hanging out.

**I lost Ty's waist padding from her pack somewhere between the boulder and treeline.  It's oval shaped, black and fuzzy on one side, light blue nylon on the other.  If someone picked it up, please comment below or e-mail me! Thanks!**


Glen Boulder has been on my "wishlist" list for awhile and it seemed like the perfect weekend for it.  I had a general sense it was a steep trail and was most excited to be above treeline.  The boulder is a glacial erratic, deposited millions of years ago.  A neat attraction to say the least!  We had just done a fabulous hike to Hedgehog with our new friends Hannah and her dog Lilo on Thursday and I felt confident that the weather would be agreeable enough for Tango to present him with a more challenging hike and that Ty definitely needed a pack to tire her out!  We went old school and she wore her Approach Pack with two Highlands beds in it.  Ruffwear advertises that they fit in their ginormous Palisade Pack but they fit in the day pack just fine.


Anyhow, I was looking forward to it all week; a friend online had posted photos of their visit to the rock earlier in the week and the foliage was jaw-dropping.  Then the same friend posted a photo from the Mount Washington Observatory of the snow conditions atop the rock pile as I was doing my final weather check and I immediately felt deflated.  Long story short, after checking all the forecasts, I left about an hour and a half later than usual, evaluated the skies and conditions from the scenic vistas along the way, and still ended up at the Glen Ellis Falls trailhead at about 9:45 under partly cloudy skies.

This is another lot that fills up quickly with the tourist-focused falls on the other side of the highway and we got one of the last spots.  The trail began to the right just past the bathrooms (or simply "toilets" as the signs said).  Leaves already littered the ground and after an early incline, the trail began somewhat mellow.

Soon the climb began and it was a rocky one.  Nonetheless, we made good time to the junction with the Direttissima Trail at .4 miles.  After this, water on the trail or racing along water bars was a common sight and there was enough mud to give the dogs some fancy "boots."  From here til treeline, I can generalize that the trail was often steep and rocky, interspersed with easier sections where the grade eased up and I had more mud or leaves than rocks underfoot.  We passed a well marked intersection for a ski trail about a quarter mile from the sign marking the alpine zone. 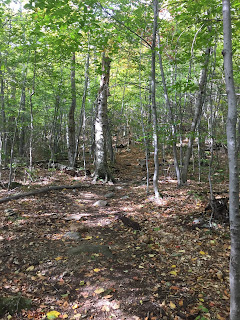 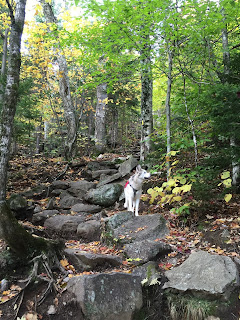 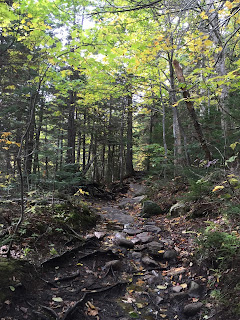 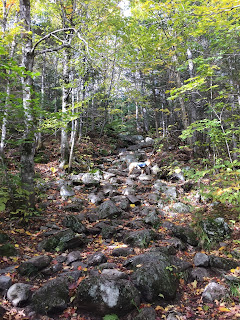 As I slowly made my way up a rocky incline, Ty kept running ahead and returning, whining more than usual.  I figured she was extra impatient until I looked up and saw that we were about to enter the alpine zone and a jump that somewhat perplexed me that she couldn't maneuver.  I got Tango up first, as he was not listening as well to "wait."  At 65 pounds, I was very happy I put him in the Web Master Pro to assist him.  Even with the harness, with the angle and his overall size, I still had to push his bum up too.
Ty was amusingly less graceful than Tango for once.  After a few lift attempts, I realized a big part of her hesitation was due to the pack that easily made her wider than the angled stretch of the rock she was to ascend.  I took it off just as a pair of hikers approached.  They asked if we needed help and my reply was, " we'll see!" and they patiently waited for us to maneuver this short but tricky scramble.  Skipping the first jump, I grabbed her scruff, wrapped an arm under her belly, and lifted her over my shoulder military style til she was on the rock.  Still hesitant to move, I pulled her along by the scruff, using my body to assure her she wouldn't fall and after two steps, she got the picture.  She then stood there and whined at me while I put my pack on, tossed hers ahead, and clumsily made my way up.

The rock face wasn't too steep but it is smooth so I would not want to do it under wet conditions.  That being said, I lost may way despite the yellow blazes a couple of times, distracted by the views of course, so I may have squeaked around a couple of small pitches judging by where I saw other heads bobbing around.  I snapped a zillion photos of the dogs while Ty pouted and I felt the wind gusts for the first time.  After a few minutes, the trail popped back into low, scrubby trees briefly before giving way again to low alpine plants that the trail wound through to and beyond the boulder. 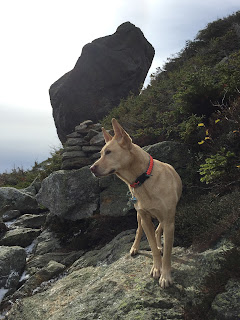 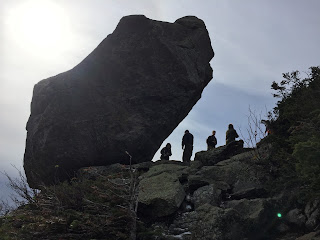 Ty was intensely and vociferously impatient today, not allowing for much time to hang out as I'd originally hoped for.  I put her Climate Changer on, hoping, in vain, that it was standing around in the wind that she was upset about and it would quell her protests.  Of course I was wrong so we wandered up the trail a bit further, hoping to see Washington.  The temperature was still comfortable, though I had added one long sleeve, shell, gloves, and sometimes a hat to the super light longsleeve layer and wicking t-shirt I had started with, all mostly for the wind gusts that probably brought the wind chill to about 30*.

Wandering north of the boulder: 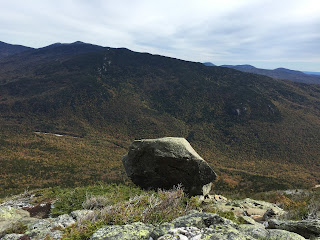 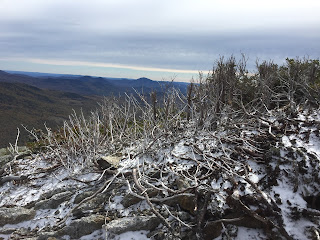 We turned around after about 15 minutes since I'd left my pack at the rock.  I hope to return and summit Slide Peak sometime.  We spent a little more time at the boulder with a pair heading out on their annual camping trip.  They were kind enough to share the sheltered side of the rock with me despite Ty's whinings.  She would go off on her own for awhile then come back, singing us the song of her people so it didn't take long before she got what she wanted.  Going down the aforementioned scramble, both dogs hopped down without issue.  Again, Ty sang me a song of "encouragement" when it was my turn.  And so, I put her pack back on her!

Heading down, we made excellent time but it was harder than ascending, having to be mindful of foot placement.  In any case, we passed many families and chatted with a few of them about the dogs. 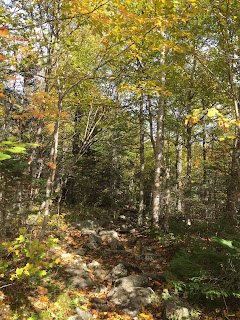 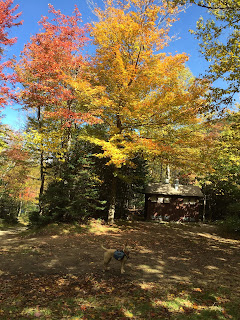 
Back at the parking lot, we dumped gear, had a snack, and wandered over to Glen Ellis Falls via the pedestrian tunnel that crosses Rt 16.  Oye!  Absolutely stunning but the dogs were far too excited to be exploring yet tired from hiking (they lose their listening skills) - bad combo for a busy day.  Pulling, taking up the whole walk, failing to listen... they were a joy.  After the lower lookout for the falls/where the trail ends, there is an unofficial trail where I unleashed them and we disappeared along the river's edge for a breather.  They had fun, dipped their toes, and I got some cool photos.  The seclusion was serene and countered the powerful water flow nicely. 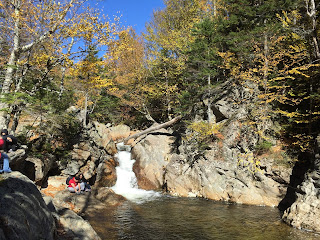 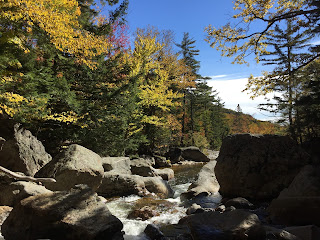 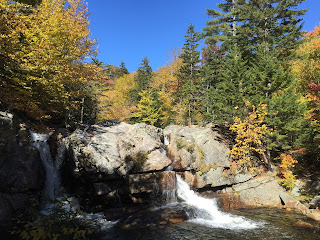 I recommend Glen Ellis Falls as a quick (10-15 minute) side trip for the sheer beauty of the river and, right now, the leaves.  We were so lucky to get into the mountains twice this week; I think we saw the absolute best of the foliage this year, something I've been trying to accomplish for a couple of years.  On top of that, we witnessed the first snowfall of the season, lightly dusting the higher elevations.  And yes, I ate some of it!

Glen Boulder Trail is steep and often rocky but it instantly became one of my favorites.  The temps were in the 40's, or so it felt and the wind gusts were a good introduction to the winter to come without it being a bitter cold day, basically perfect for a short, steep trail.  With the cool weather, it was awesome to see Tango so enthusiastic - tail up, trotting ahead on the easy portions, not hesitating where it got steep.

There was plenty of running water for them.  It had rained the day before so I am sure some of the runoff is not reliable but much of the creek crossings seemed to be.  While the rocky sections were sweat-inducing (though not necessary, I used my hands to push off frequently; I felt very out of shape!), they were broken up by easier (gentler incline and/or better footing) sections.  The leaves have begun to fall so I think these sections will be a little dicey soon with the leaf coverage making the ground more slick than wet rocks.  They were short, but enough to provide a break.

I was surprised that the dogs had difficulty with the scramble that welcomed us to the alpine zone based on their previous experience.  Though when I hoisted myself up, I understood.  For that section alone, and the potential for dangerous conditions above treeline, I'm categorizing this one as being on the difficult side of moderate.
Posted by pawsonpeaks at 11:06:00 PM