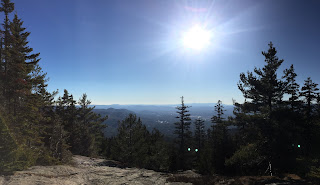 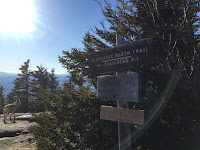 Sunday's plan did not follow any of the tentative ideas set in place during the week.  Passing through Fryeburg, I still didn't know where we were going to go while the clock crept towards noon.  At the turn to depart from Rt 113, I opted to turn right and see what the view was like from the visitor center in North Conway and go from there.  I had a lot of factors to consider: the expected wind chills, a new foster pup from Texas, some gear to test, and changing forecasts.  In the end, we parked at the Kearsarge Trail on Hurricane Road for Kearsarge North.

The dingo ladies sang me their impatience song so I prepped as quickly as possible.  The pups were all stoked to be there and we got started quickly and in great spirits.  I couldn't believe the weather - mid 30's (the whole way up) and gorgeous blue skies. 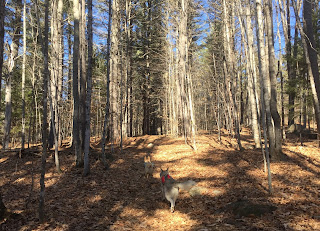 The trail began covered in leaves but rocks were sparse so I wasn't constantly tripping on hidden ankle-twisters.  The grade was easy and the dogs continued to be in an extra chipper mood.  We passed in and out of pines and the ascent began slowly and easily. 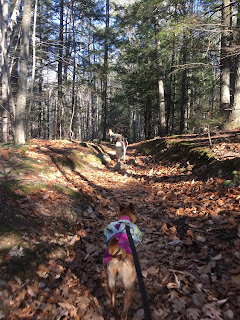 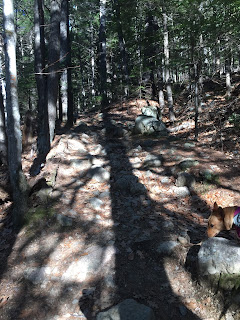 Twenty-five minutes in, we were back in the evergreens for awhile and the trail was littered with small rocks but still generally good footing for the Whites.  What I loved about this trail was its rolling nature.  We would gain some elevation then amble for a bit, making for a really enjoyable hike.  If the 4K's were like this, we'd do them all again! 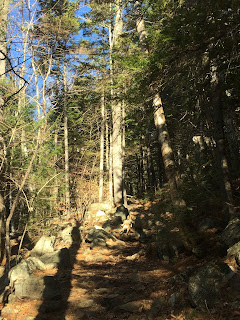 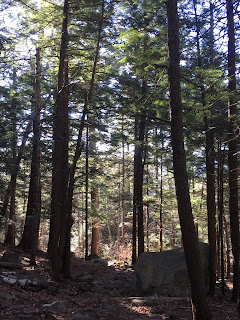 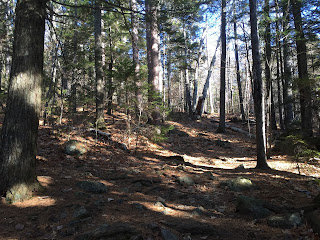 About halfway to the summit, there was what seemed like a vernal pool that didn't know we were in late November - bigger than a puddle but by no means a pond.  Though not ideal, it was the only decent source of water along the way for the dogs.  They found some puddles in the rocks further up as well.

After their drink, we kept a brisk pace through another flat section littered with leaves.  Gradually, the ground underfoot turned to rock, indicating we were nearing the ledges.  (I never thought of broad, flat rock sections as ledges but that term is per the White Mountain Guide.)  The ledges gave teaser views of the valley but the trees rose too high to see much.  In the winter when the snowpack is high, the views are more complete.  For about a half mile we got to enjoy weaving our way up the rocks.  This is also where we began to encounter a small amount of ice - occasional thin sheets over the rock faces and frozen puddles. 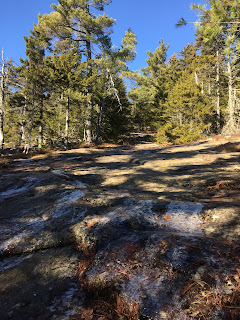 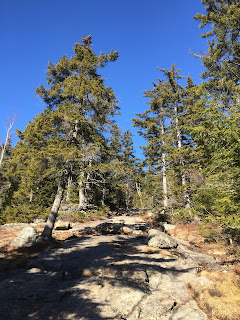 We then re-entered the woods where the trail switched gears to the root and rock-covered type.  Special care with footing was required here and there, especially on the way down, but not too bad, especially in comparison with the higher peaks.  A Facebook friend shared photos from Cannon where the trail was quite literally a river of ice.  There was a small (several step) drop and then steep ascension of 20 or so feet that really threw me and my stepmom off the first time we did this hike last year. Within a few minutes, we took the first of two telltale turns where I knew we're nearing the summit.  The first is a right that goes over a boulder (photo below) and the final, left-handed turn is a giveaway we're about to reach the summit ledges.  Something about that left is unmistakable - the way the wind hits us on blustery days (every previous visit we've made!) or how the sun shines down at an angle on sunny days.  Today the weather gods blessed us with no wind and stellar blue skies. 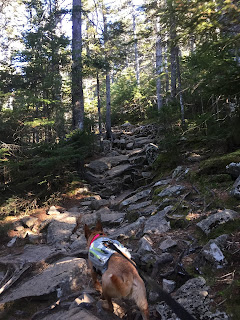 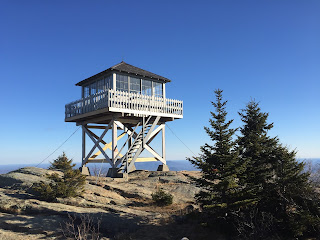 After a snack and some wandering (and some moose poop I'd like to forget), the folks in the tower departed and we scooted up the steep stairs to a miraculously empty, warm fire tower (another two firsts!).  We snacked, the girls whined, and I took in the 360* views, from both inside the tower and the narrow porch around the exterior. 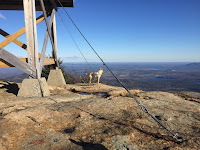 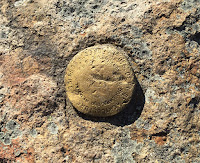 While I could've stayed forever, knowing I might not ever get an opportunity like that again, the girls were antsy to keep hiking so we headed out. 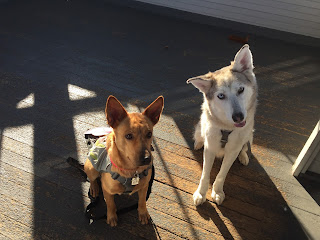 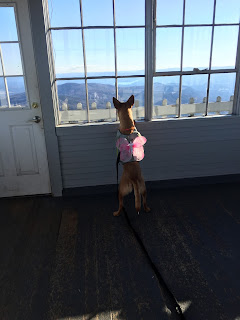 Not too much to say about the hike down.  We cruised, even over the sections with minor amounts of ice.  While it took about two hours to reach the summit, it took half that to get back to the car.  When Tango wants to jog, you jog! It made me so happy to see him so vibrant and enthusiastic.  The total duration of our hike was just under 3.5 hours, as we pulled out at 3:00, exactly 3.5 hours after we started out. 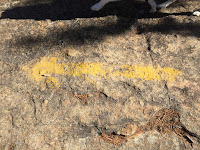 TybTangs and I did Kearsarge North a handful of times over the winter/winter-like season last year with bipedal companions so I was really curious what it would be like in dry conditions and I have to say, it did not disappoint.  It is officially one of my favorite all-season short hikes.  The grade stays in the easy - moderate categories and is never steep.  Only once or twice did I have to use my hands to help myself up but that likely wouldn't have been the case if I weren't attached to Eva and didn't want to be unexpectedly "encouraged" forward.  For me, there are enough notable changes/sections throughout the Kearsarge Trail that I always have a decent idea of where I am in relation to the summit.  I enjoy knowing the legs of the journey.  The 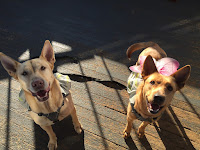 trails that go on uniformly for miles wear on me as I wonder where I am in between junctions.  The footing is great for the Whites. While I do enjoy a challenge, most of my favorite trails are those that are easiest for Tango and this one is certainly a winner.  It was an absolutely perfect first hike for Eva, who rocked it.  Two noteworthy comments regarding the pups: the first .3 miles go through a residential area and there is not much in the way of natural water sources.  We love the tower at the top, whether it's to escape the wind for a moment or take in the views.  Four extremely happy hikers at the end of this one!