Better late than never when the hike was as good as this one!  Sunday morning, my car-ful of dogs found its way to the base of Ravine Road in Benton where we met up with Linda, Dan with Molly, and Hannah with Lilo.  Eva danced around, excited and scared at the same time (she's a timid chica with new people).  Once we got underway, she was prancing.

That was at 8:45 and it was barely cool enough for gloves.  Gloves I quickly lost and had to turn around for.  That was loss #1 of the day.  We passed the lodge and the end of the road where the actual trail system begins.  I don't have many photos but they're extremely well marked.  We opted to head up via Gorge Brook and return via Carriage Road and Snapper. 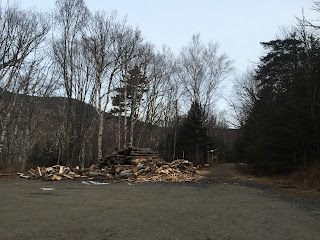 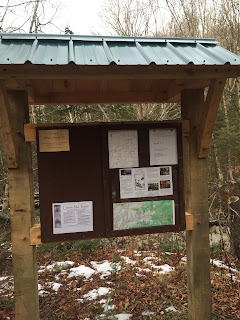 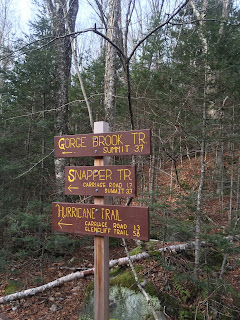 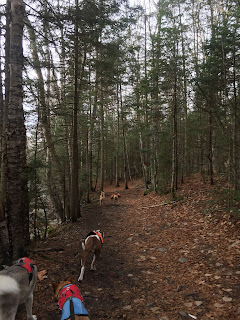 The trail was a little rocky but moderate in grade, following the water for a ways before reaching the Gorge Brook/Snapper junction. When we turned right onto Gorge Brook, the trail became (even) easier (sounds backwards, right?!) as the woods thickened and the rocks became less existent.  The trail curved left, the rocks returned, and it became slightly steeper (still moderate by comparison to, say, the A-Z Trail as one approaches the ridge).  Soon there was enough ice between the rocks that we donned our microspikes. 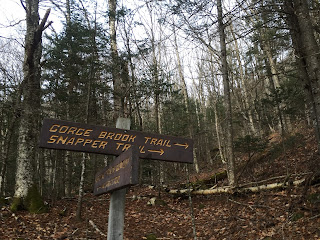 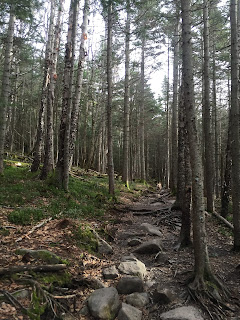 Between then and treeline, we leapfrogged with a group that wasn't sporting traction and, with their trekking poles, fared well.  A few winding switchbacks that I hardly noticed as such maintained the moderate grade that we'd been enjoying.  There were a couple of vistas along the way and as the trail turned ledgy-er and the trees got scrub-ier, I knew the treeline was not far.

Between then and treeline, the trail wandered much like many ridge walks do - icy at the moment, fairly flat, and quite enjoyable!
The last quarter mile (appx) was exposed but the wind didn't really hit til the very summit.  I'm still in awe of the weather we had.  The trail conditions were fantastic for this time of year (read: not too icy, the dogs had no issues) and it was in the forties aside from the summit, where the wind chill brought that down to a guestimated 30* or so.  Our fingers got cold but we enjoyed an extended break at the summit, snacking and taking photos and all the dogs fared well staying warm and comfortable (and only a teensy bit impatient!) 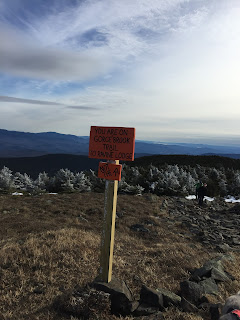 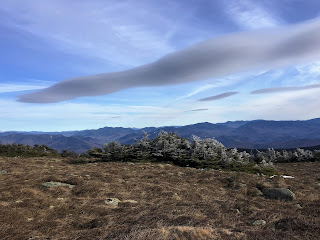 The views and our tolerance for the wind solidified my goal to hit some higher peaks this winter. 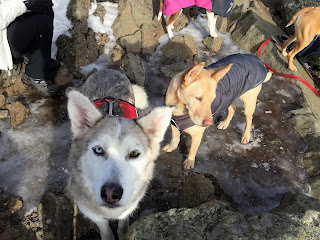 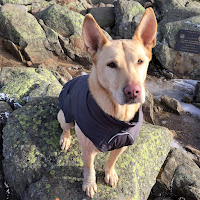 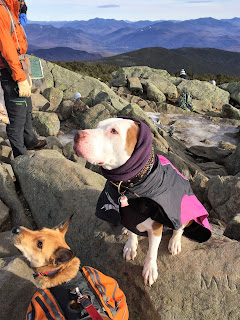 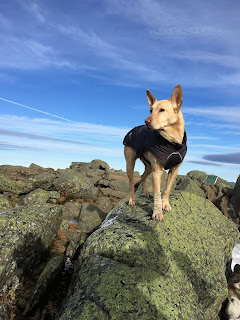 Heading down, the wind died off almost immediately as low tree cover became available and we used the opportunity to put our micros back on.  I also got to be part of the doggy huddle (below)!

We took the 10 minute detour to South Peak and enjoyed its quieter summit and beautiful memorial plaque.  The last couple of minutes were a bit steep but I honestly preferred it to our summer ascent since the ice smoothed the rock jumble a bit and required the use of traction that wasn't an option in the summer and made getting a foothold easier. 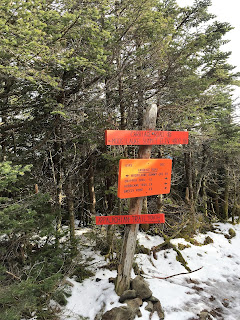 Carriage Trail is a favorite - steady, easy grade and good footing, although micros are most definitely recommended.  The ice turned to shallow, slushy snow  before  completely giving way to dirt and mud.  As the trail narrowed, we met two dogs and their humans cruising down, giving Ty the opportunity to slip away for a bit.  Loss #2.  Like the gloves, the search went on a little longer than I'd expected but all's well that ends well. 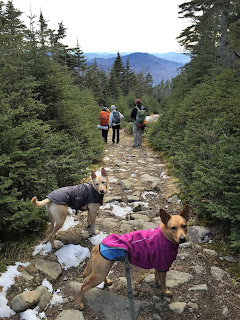 A little muddy, a little rocky, but an easy descent all in all.  Snapper and Ravine Road flew by as we were closing in on dusk and the going was good, we didn't make any more snack breaks and only one wardrobe change (de-layering for the dogs). 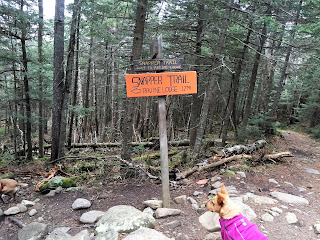 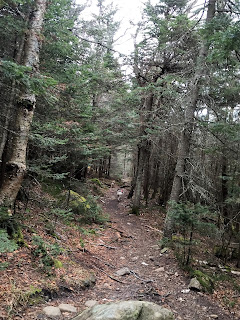 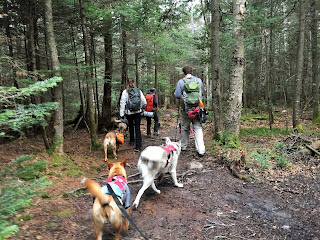 Lots of (temporarily) sleepy dogs and a handful of happy humans who love Moosilauke!  I wish this one wasn't so far for us; Tango did fantastic, even though he is on doxy for some tick borne illnesses and he probably did a full 11 miles once my backtrack for the gloves is factored in.

The Moose (via this route) is, in my opinion, one of the easiest 4K's and most enjoyable.  It offers decent footing and easy-moderate grades.  It's a good introduction to being above treeline and it can definitely get windy but the exposed distance is about a half a mile via this route.  The dogs found plenty of running water along the way and dined on snow.  It was a little challenging to find a spot that protected them from the wind at the summit but their coats seemed to help quite a bit; Tango was fine (naturally!), and Molly (no coat) seemed plenty focused on food to be bothered.  On top of it all, we were treated to spectacular views.  I know folks who have visited this summit seven times and missed the views.  My advice is keep going til you get lucky. The hike is enjoyable regardless and the views are worth coming back for!