So very close to being caught up on all our amazing hikes in the Presi's over the last month!  Missed a couple well-loved hikes but, like the one below, it was covered once before at least!  This one is for our Independence Day Loop because what better way is there to celebrate?!

Last weekend was a good example of how challenging it can be to match the sometimes opposing needs of dogs with different energy levels and interests.  I opted for a sunrise hike up Edmands and over to Lakes of the Clouds and back - easy to moderate trails for Tango and no summits, early morning for Tango to beat the rising summer temps (and because I love sunrise above treeline!), alpine time for Ty (so she could be off leash that early in the morning), and reasonable mileage for both.  Despite finishing a knarly 17 mile traverse the day before, Hannah joined us with her two pups in the wee hours of the morning.  I oogled the sky while we dressed the pups in the parking lot. 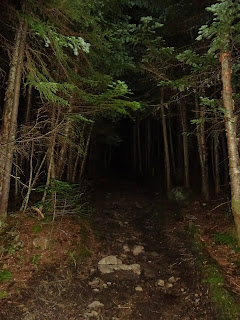 Edmands began easily, a good way to start a morning at 2:00AM!  With the headlamps, it wasn't hard to see the couple of small water crossings with log bridges across them.  After the last one, we slowly began to gain elevation without adding much complexity to the terrain. 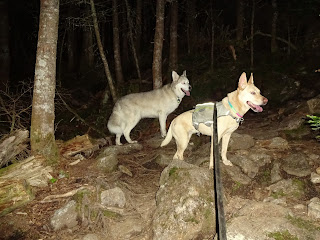 As we progressed, the steepness increased but never for too long and the rocks were damp.  Edmands is eternally damp at best.  As the first hint of orange-red sunlight lined a distant mountain-side, the footing was becoming rockier but we maintained a steady pace. 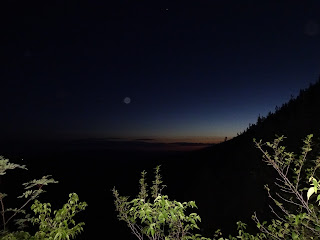 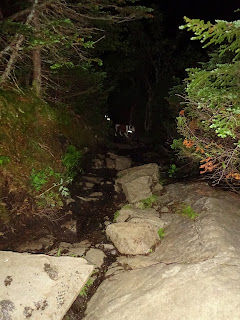 We crossed a brook, which I treated with a little extra thought since it was still dark.  From there, the water ran through the rocks of the trail, making me briefly wish I hadn't worn my trail runners (I'd left my boots in the rain a couple days before).  It was a nice benchmark letting us know we were getting close. 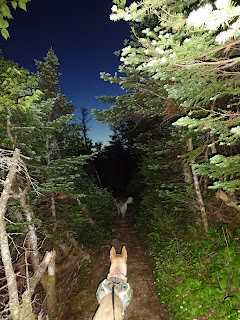 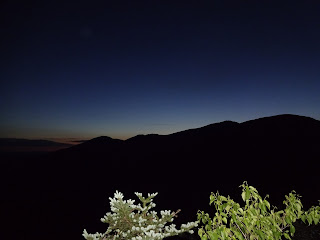 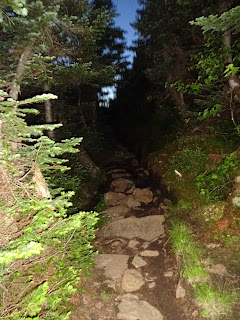 The trail also became less steep shortly after the crossing and was a mix of large rocks to maneuver and mud/flat dirt ground until reaching treeline.  The previously non-existent wind made a powerful entrance and by the time we reached the infamous yellow warning sign, I was second guessing my plan of walking into it for the next couple of miles. 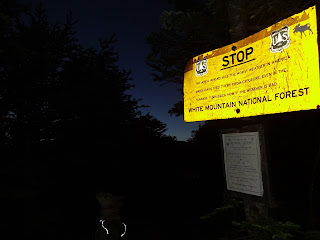 Thankfully, Hannah said that going down Edmands would be a no-go for logistical reasons so we opted to head over to Pierce and turn the hike into a loop utilizing Clinton Road.  The sun was up enough that, even though we would be walking in and out of scrubby treeline pines, I was (mostly) ready to free the beast.  I put on her Noxgear LED harness, e-collar, and bear bell, all with extra Nite-Ize gear ties for reinforcement and off we went along the Crawford Path.  (Hannah humored my lazy request to bypass Ike.) 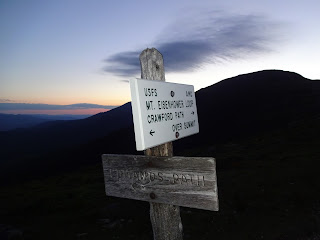 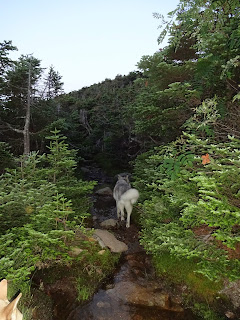 The trail didn't seem to vary much in elevation but nonetheless went up and over big rocks that add some difficulty to an otherwise mellow (and muddy) trail.  Turning around frequently offered gorgeous views of the sun rising. 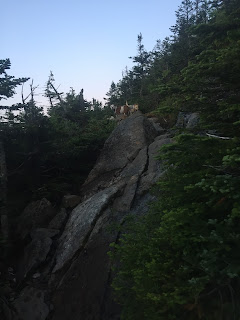 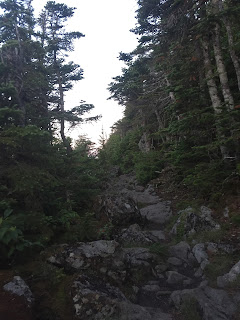 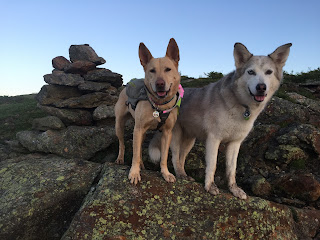 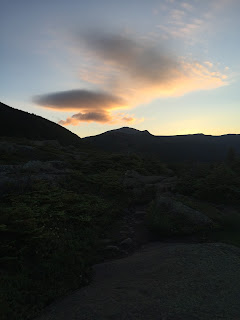 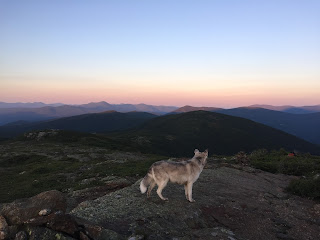 I'm going to be completely honest, I have written about the stretch of Crawford between Ike and Pierce a handful of times so will only describe it in photos here.  Overall, it's a lovely, gentle descent then quick ascent of the ridge between the two peaks traversing slabs, mud, and rocky ledges, and beautiful views. 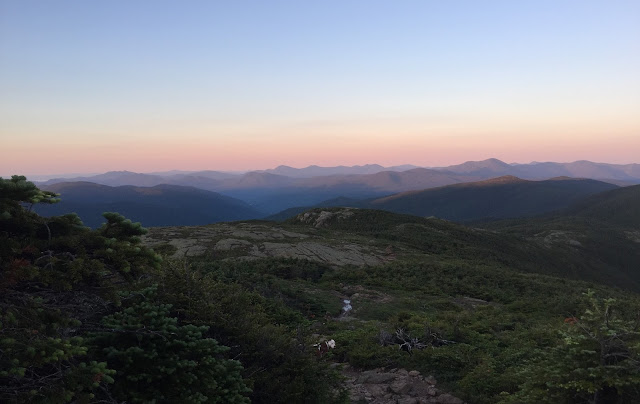 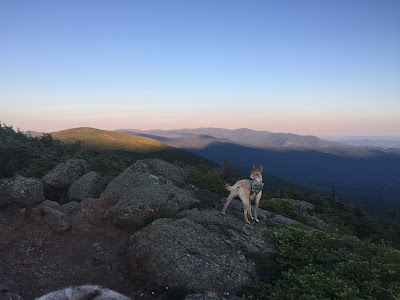 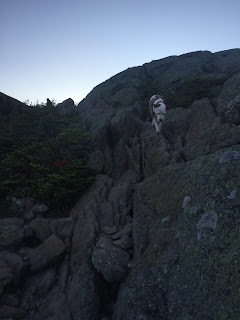 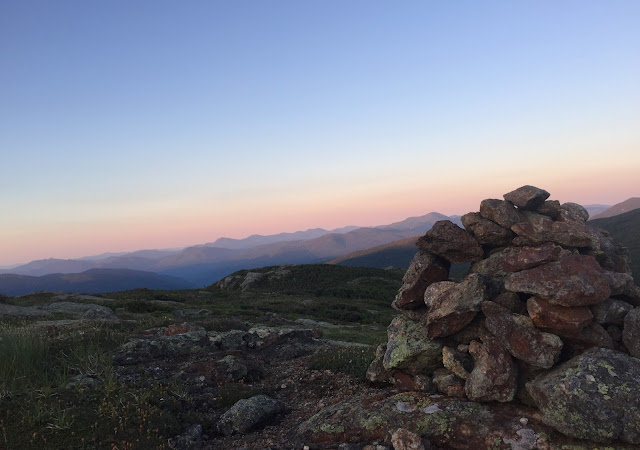 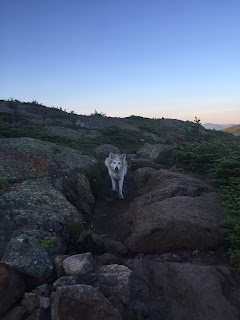 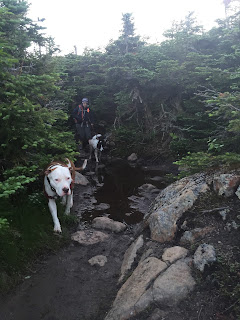 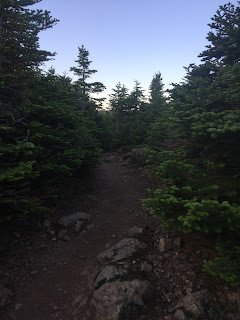 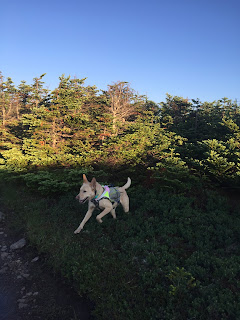 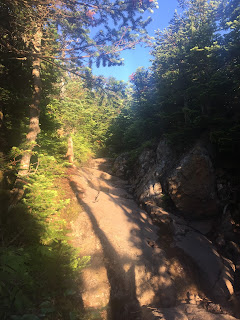 We rounded the corner to the junction sign a little bit sooner than I anticipated and we decided to run up to the summit for Titus's NH4K #2!
Heading down has been described more than once by this particular blogger so I won't go into too much detail.  Crawford is fairly rocky (the round, small boulder-y kind) but still has decent footing and maintains a fairly moderate grade.  It has a tendency to be damp, especially in certain areas like the upper section above the Mizpah Cutoff.  We noticed a handful of new, several step sets of steps that looked impressive (read: difficult to install) in heavily eroded areas.
After Gibbs Falls, we took the Connector down to the road and hoofed it up to the cars.  Other than the fact it was warm, it was an enjoyable break from miles of careful footing.  We were unsure how busy the road would be around 10:00AM but it was surprisingly quiet with only a few vehicles passing us.  There were even a handful of small streams that provided easy water sources for the dogs. 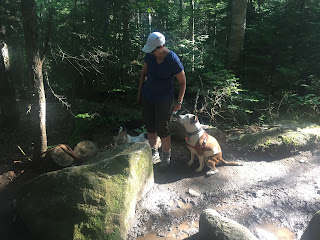 I can't help but feel a little guilty for subjecting everyone to reading another Pierce/Ike blog but it's such a favorite for all the reasons I always list: decent water sources, decent footing, and good grades.  And, as we've been fortunate enough to say a lot lately, excellent company!