A little taste of the Presi's: Low's Bald Spot 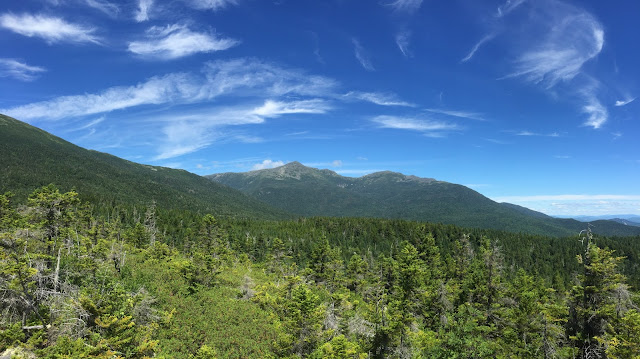 By far, the longest time it's taken me to write up a trip report but for such a great a little hike, it was worth plugging through!  Being that this hike was awhile ago now, I'll provide a simple description for hikers considering it.

Low's Bald Spot is a fantastic and strangely quiet viewpoint on the western side of Mount Washington, minutes off of the Auto Road, providing some super cool views.  In the days leading up to the hike, I couldn't figure out what I wanted to do for foster pup Sage's first hike and spotted the suggestion on my AMC White Mountains National Forest map.  Instantly sold on the idea, I messaged Hannah and she agreed to come along for the short, fairly easy trek.

It begins at the Pinkham Notch Visitor Center (read: start early!).  I was feeling especially anti-social that morning and parked in (what looked like) the last spot at the end of the overflow lot.  Later, someone wedged a Corolla next to me and some little $%&$ behind me, making me extremely grateful Hannah was there to guide me in backing out.  Come on people, show some courtesy and foresight!
Back to my happy place... mere steps onto the Tuckerman Ravine Trail, Old Jackson Road departs and the chaos of summer hikers not only subsides but all but disappears.  For awhile we tramped on at a brisk pace over relatively flat terrain. 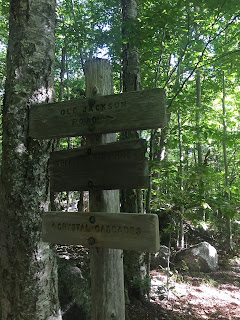 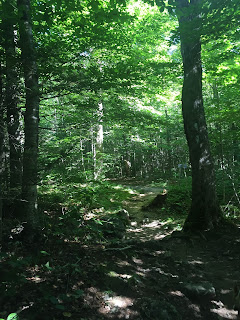 The trail soon widened and the incline was more moderate with even better footing.  It was at that point we passed a group of guys taking a break.  I've always said, "the trail provides" and they proved it.  Sage is a shy gal.  I don't think she met many people before being brought into a shelter in Texas.  They were friendly enough to send good vibes but not insistent enough to try to say hello.  She had a great experience with the benign nature of strangers and got her first of many trail-related confidence boosts. 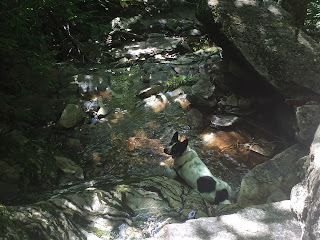 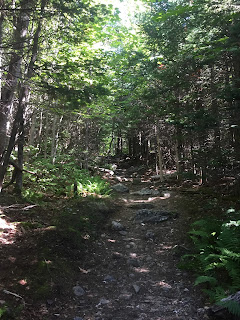 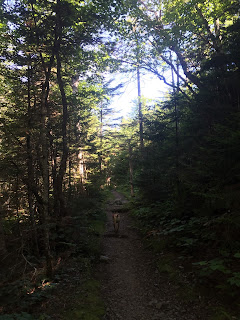 After the incline, the trail evened and crossed running water.  We'd passed a handful of dry stream beds so far and this was a veritable swimming pool.  Okay, kiddie pool.  Then came a sharp left turn up a staircase.  We passed it slightly for another water break before ascending. 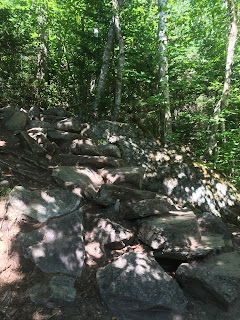 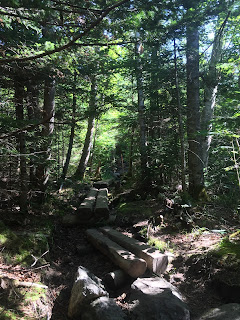 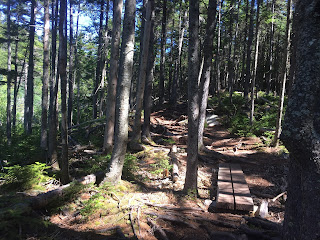 The bulk of the trail from that point to the crossing with the Auto Road was surprisingly flat.  Small boulders required an iota of effort to maneuver between paths but the ease of the hard packed dirt was a welcome change from the usual.  The make-up of the forest also offered diversity, from the oaks and maples at the start to hardwoods and a lot of fallen logs and mosses reminding me of a section of the Jewell Trail towards the first viewpoint (nearing the alpine zone).

That first viewpoint is accessed via a herd path just after ascending a very short and easy scramble.  We enjoyed a snack and giggles at Sage's seating position before continuing on. 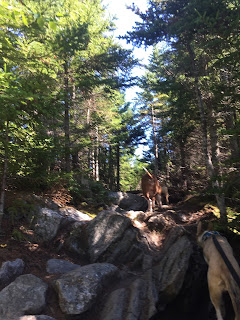 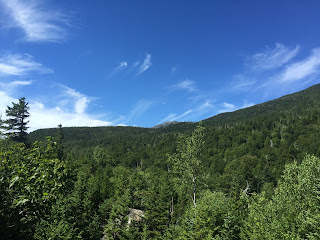 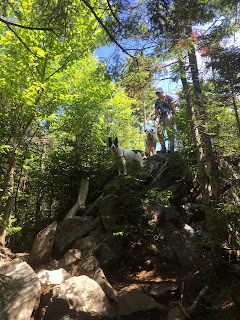 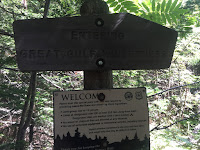 We didn't make it far before crossing the Auto Road and the dogs took another drink and we observed some curiosities: 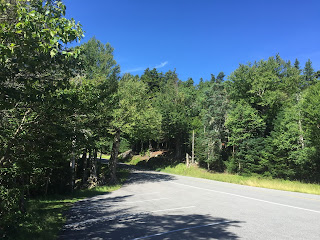 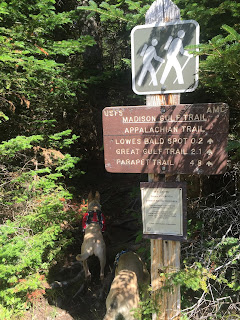 After a few minutes of gentle ascent, we reached the intersection with the side path and a scramble that beckoned us towards Low's.  Sage handled it like a natural and we traversed the exposed bedrock up to our resting point just shy of the actual summit, which we eventually visited as well. 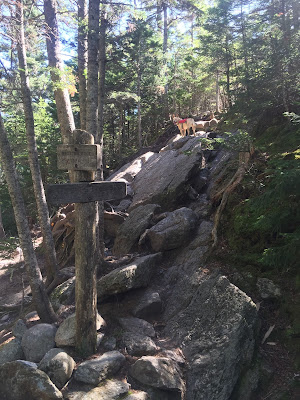 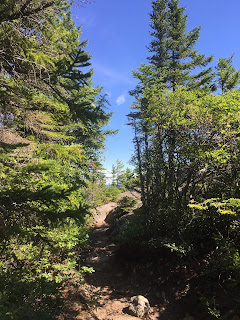 With hardly any wind, blue skies, and natural seating, we hung out for quite awhile, only being passed by two other sets of hikers.  I suppose, being what it's surrounded by, the seeming lack of popularity of this hike shouldn't be a surprise but to me, it's a semi-hidden gem. 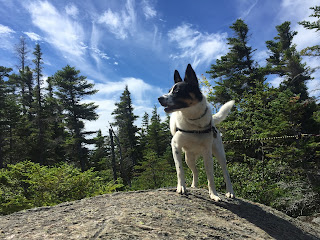 And I just can't get enough of these two! 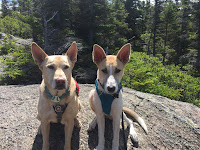 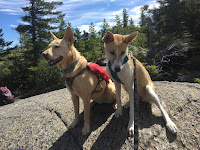 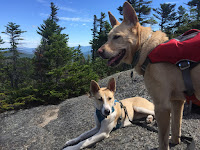 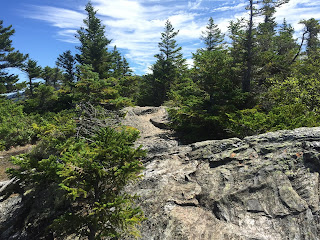 Looking northeast - Wildcat ridge being the most prominent feature 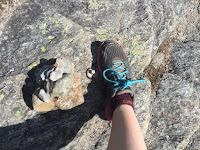 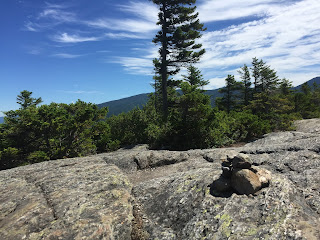 Smallest summit cairn ever!
We will definitely return when the day calls for an easy, bang-for-our-buck kind of hike.  While there is 1,050 feet of elevation gain, we hardly noticed any until we were cruising down.  Well, somewhat cruising, poor Titus tweaked something that he has an upcoming visit with a specialist for.  The silver lining is this gem: 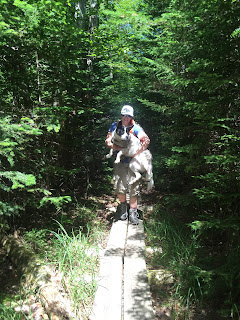 This time of year, there was not a heck of a lot of water but it was obvious that there is during others. Considering what Ty and I are currently working on with training, I liked that this trail mostly parallels the road.  Out of earshot and relatively quiet but being so close to roads and more popular trails cut down significantly on the critter sightings.  It was such a fun day, I recommend this hike as a starter jaunt, for a quick view, or simply a hike on the more relaxing side.  But with one fun scramble! 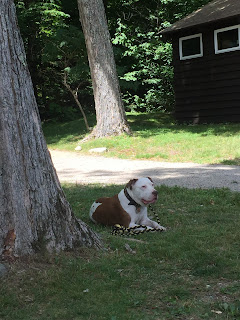 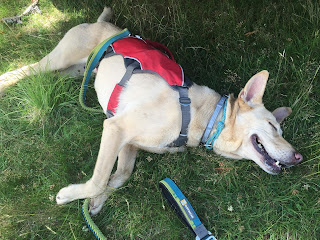