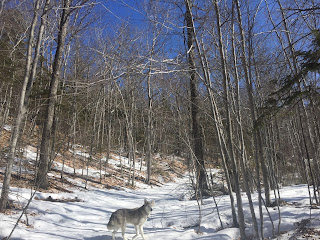 I often like to do a lot of recon before a hike.  Other times I do a bit but sort of wing it, usually in places I'm somewhat familiar.  Today (now yesterday) was a totally winging it kind of day as Amy and I met up with the dogs, initially to be disappointed with the parking options at the base of our originally planned hike.

After quickly reviewing alternatives, we traveled down Rt 16 to Scott Road in Tamworth with the intention of heading up Hammond Trail, hopefully at least to the Jim Liberty Cabin.  While warmer temperatures and lower winds were in the afternoon forecast, at 9:00AM, it was still in the single digits with some cold gusts so neither of us necessarily had our hearts set on a summit but I was hoping for some sort of closure for Ty - the  cabin, a ledge, something that would give her a good turnaround point (because she is a true peakbagger and is very expressive about turning around for what she considers "no reason")!

The lot is small and thankfully we were the only ones there.  From the start, micros were absolutely perfect for the entirety of the hike. The ground was generally hard packed snow.  Perhaps there wasn't a lot of traffic on this trail throughout the winter because it is almost level with the melting around it - no monorail.  Plenty of spots were down to the leaves with only a dusting on top as well. 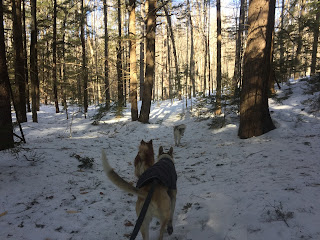 Within a half mile or so, the trail crossed a brook twice, the second of the crossings being a little difficult for the dogs because the few rocks available for hopping were coated in glassy ice.  For once, we humans had the advantage!


Another quarter mile later, as we began ascending a gentle hill, the trail was intersected by what I thought at the time was a carriage road.  Upon returning home and doing some research, it appears to have been a logging road, which I find interesting because I didn't see the evidence of logging I'm accustomed to and it shared characteristics with the few carriage roads turned trails we've hiked.  That being said, many of my experiences with logging roads involve recent harvesting and that particular road could be much, much older.  For example, Lincoln Woods was logged heavily from my understanding and it's unnoticeable to me.

At that point, half the dogs were migrating up the road instead of the marked Hammond Trail.  In light of their enthusiasm and knowing it'd be better footing and consistent grade for Tango, who is about to start PT, we decided to follow them. 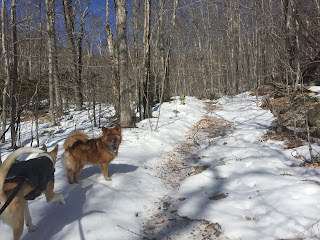 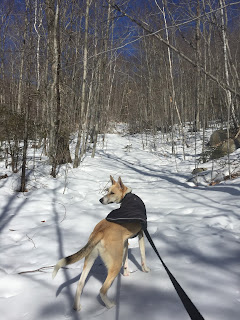 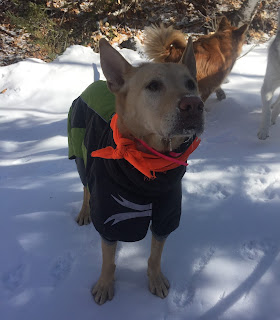 The logging road followed the river high along a ridge for awhile and predominantly through hardwoods that creaked in the cold, throwing me off on more than one occasion.  Despite the mellow grade, we gained some appreciable elevation as it wound up the mountainside, something that became very apparent as the wind hit us more powerfully!

Eventually, the road dwindled to nothing and we explored some possible tributaries before heading back.

Back at the car. Everyone looked so darn cute! 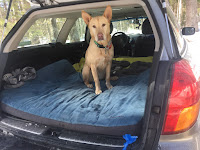 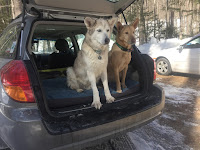 It was a view-less and lovely day wandering that old road and not something I normally do.  But I'm glad we were spontaneous.  The dogs had a great day and it was fun catching up with Amy, who was kind enough to humor us with our variety of sometimes conflicting canine needs throughout the morning.  While this post falls short in the trail reporting sense, may it encourage you to try new things while the trails are in great shape! 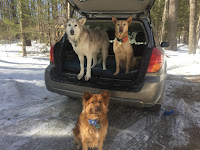