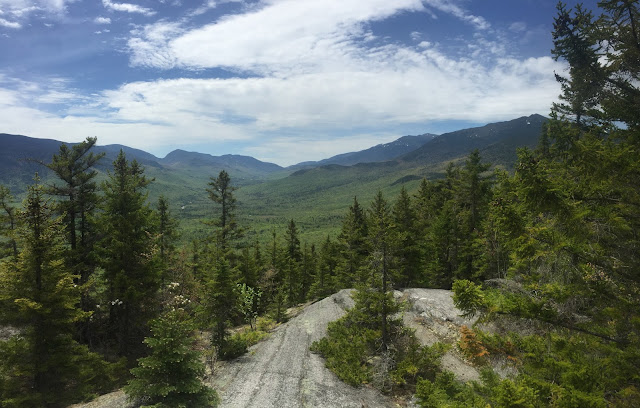 Howdy! This is our first post since the spring and we've mostly been visiting the Belknaps and a couple excellently short, bang-for-your-buck hikes in the Whites.  In doggy notes, Sage was adopted, we got to hike with Titus again, and Tango has been doing a couple sports for conditioning/strengthening while I search for a trainer to address Ty's excessively predatory behavior.  To make a long story short, here's a quick-ish write up of one of our hikes back in May that I think is definitely worth consideration!

Pine Mountain in Gorham, NH seems to be a well-kept secret.  While a surprising number of people arrived on the summit during our visit, the trails were quiet and I found very little literature on the interwebz about it. Other than the obscene amount of no see um's and other flying evil doers, it was an awesome hike!

A lollipop can be made of this summit from either Pinkham B or downtown Gorham in order to see all it has to offer but we did a short out-and-back from the former.  The Horton Center is a religious retreat that owns a large portion of the land the trails winds through and graciously allows hikers access.

Most of our hiking was up the dirt road to the center and it was pretty darn nice!  Where the trail departs the road is well signed and we were suddenly on a narrow trail in stark contrast to where we just were.  We tip toed on a handful of bog bridges but didn't gain much elevation before reaching the trail's junction. 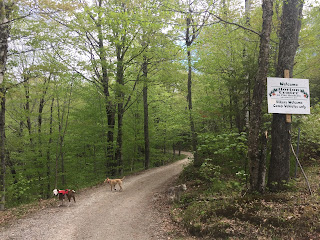 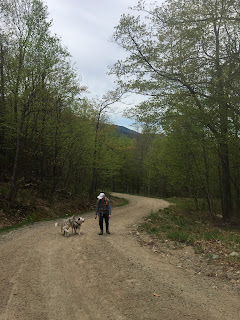 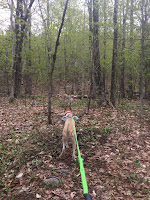 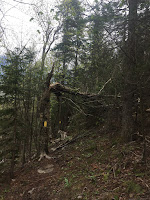 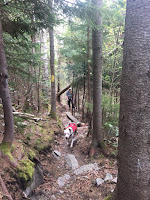 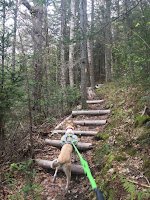 At the junction I failed to take a picture of, we opted to head straight up to the summit by taking a sharp right.  Going straight ahead would've brought us closer to the center's grounds and Chapel Rock (pictured above due to formatting).  Instead we got a nice view of it from the first viewpoint along a short, marked path off shooting from the trail. 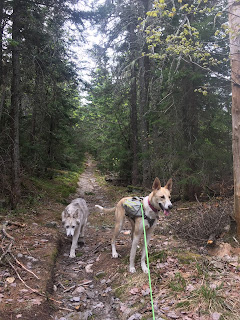 We stopped at most of the marked viewpoints as we walked along.  The trail was enjoyably pretty through conifers, hemlock if I'm bold enough to guess.  Footing was very nice and easily navigable.  It was also a lower grade than the steepest parts of the road. 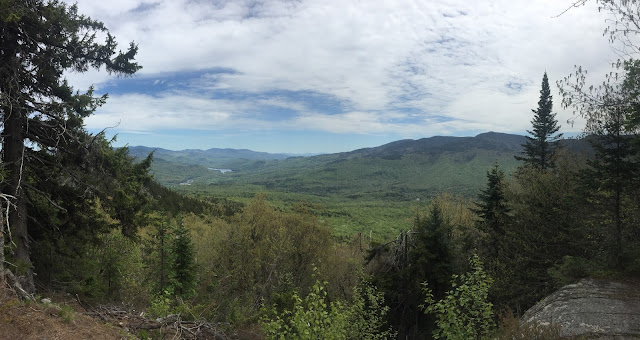 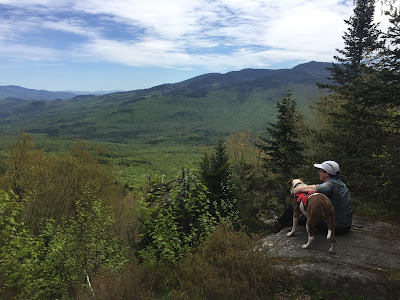 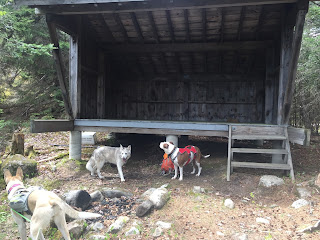 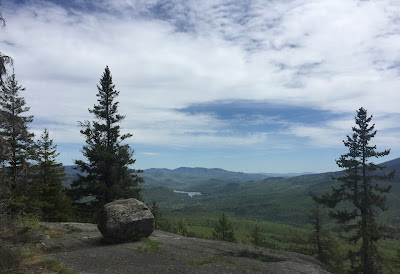 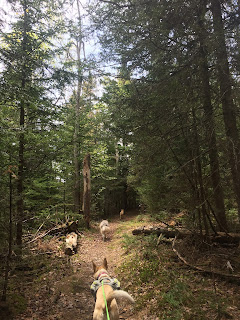 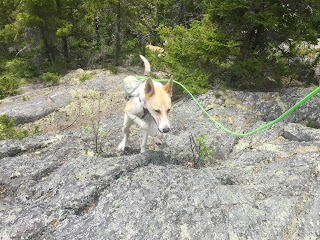 We took breaks due to the heat before and after the concrete remnants of an old summit tower and enjoyed the views from the ledgy section of trail that brought us to the south cliffs where many people could enjoy the views of 'the big mountains.'  From there we crept down the smooth rock face, attempting to do the loop part of the hike.  Despite seeing people come up from that direction, we just couldn't figure out where they had come from.  Not overly interested in asking nor the climb that we sensed was likely on the other end, we opted to simply head back the way we'd come.  It was certainly nice enough to repeat in reverse! 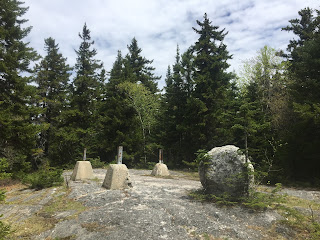 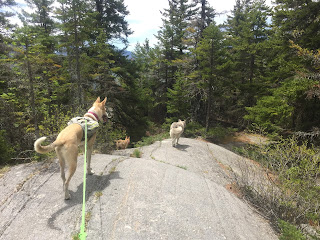 Where to go?
I don't have much to report about the descent.  I bounced ideas off of Hannah about Ty's deer chasing, we watched the dogs' gaits for issues, and were slightly less attacked by bugs than on the way up.

Coming in at a fun-filled three miles, it was a perfect hike for the day since we were already up there and we elongated the duration by meandering.  If done as a loop it will be a bit more depending on which direction one comes from.  It's absolutely worth the views; I can't say enough about that!  Writing this well after the fact, I don't recall many water sources except in the shallow trench alongside the road and believe it or not, I did run out of water!  The grade and footing are very "active senior" and "recovering dog" friendly.  I've probably said that before about rockier trails but I speak the truth on this one!  I harbored a little nervousness about Ty in the less-traveled woods but it was truly a great hike for everyone.  We followed the signs and found it easy to get to our primary goal but I managed to confuse myself about the loop business.  Something to explore for next time!