The Peaks of Pawtuckaway 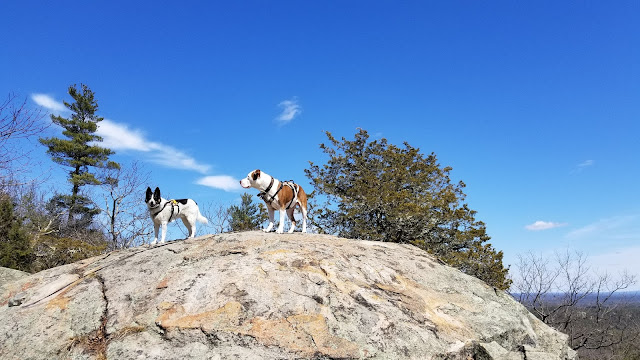 Last week I went from gung-ho about peakbagging to barely wanting to head out at all come Friday night.  Joining Hannah at Pawtuckaway on Saturday, April 7 was the perfect solution.

We had a rough idea of what we wanted to do: Reservation Road to North Mountain (1011'), maybe add in the tower on South (908'), and loop back to the car.  Speaking of rough, apologies for the unedited photos, lack of summary stats, and first draft-level language; I'm still working on finding blog writing time while my brain is still awake!

To get to our starting point, we followed Reservation Road down the hill past where it turns to dirt and parked near the first orange gate (also where the road hooks to the right). 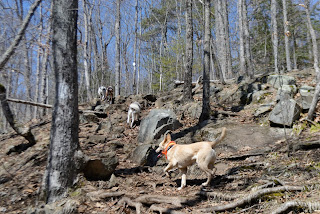 There were several cars parked along the road and we prepared for a busier day than anticipated.  The trails starts on  what I assume was once a carriage road but quickly we reached the junction with North Mountain Trail and started with a brief, rocky climb.


There is no snow up to North Mountain!  The trail is well marked with white blazes yet we still found ourselves accidentally wandering off between the sparse trees.  Grades are moderate and the terrain is more akin to that of the Ossipee Range trails than the Whites – more hard packed dirt and rock slabs than boulder-strewn.  It often reminded me of Mt Roberts but a little easier. 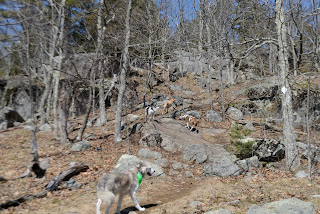 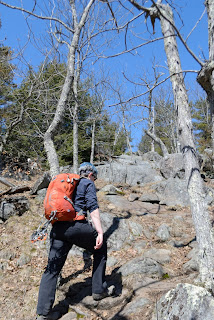 Between Ty and Titus, we seem to be in a calamity vortex that included our first porcupine encounter in quite some time.  Ty led as Titus followed her off trail, noses suspiciously angled upwards.  In a strange turn of events, she returned promptly when called and Titus had to be tracked down by his confused barks.  Yep, T’s first quilling L

The bizarreness continued but in a more productive way as we rounded everyone up and away from the languishing porky.  A couple was coming down the hill with their three dogs.  Lo and behold, they were veterinarians! And damn good ones; the guy, whose name I regret forgetting, calmly pulled T’s quills out (with his fingers no less!) and gave a quick recap of recommended aftercare before we continued on.  How Ty didn’t put herself in the middle of the interaction and what made T nip at the animal’s prickly backside more than once has stumped us both!

As we continued on, there were a couple of opportunities for hill views and the wind started to pick up.  We made it down to the old concrete blocks for a short break and Hannah made out better than I did getting the dogs to pose.  Tango has his “front paws up” mastered but won’t stay without constant rewarding just yet. 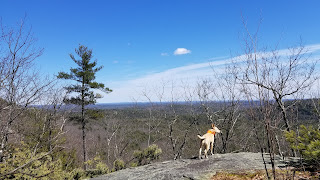 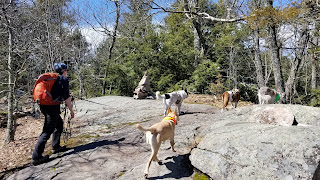 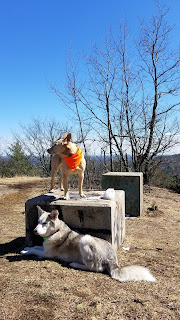 Between the base of the old tower and the pond, the trail went through patches of dense conifers and has some steep sections with lots of ice-glazed roots.  I was in Bogs and did alright but the party that let us go first was wearing micros and warned me to "be careful."  We enjoyed the alternating tree cover and spring vs. desperate last hold on winter conditions. 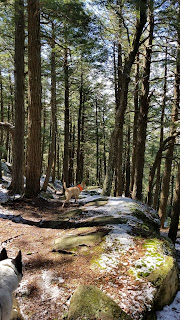 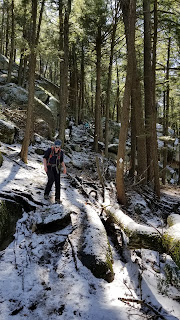 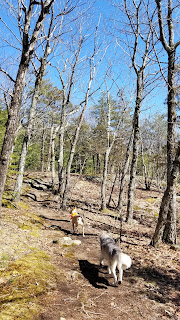 Down by the ponds, we wove around the marshes and boulders, somewhat following the trail but appeasing Ty’s exploratory nature. 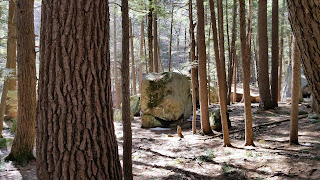 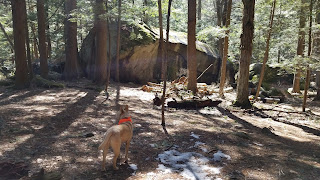 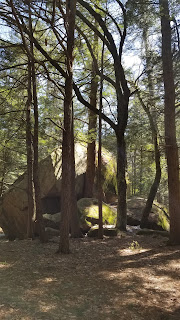 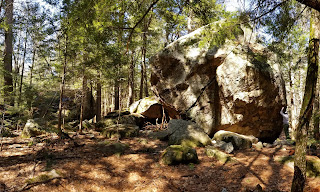 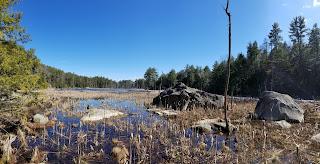 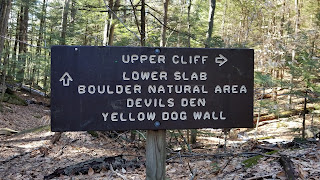 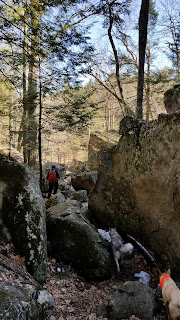 Back on another carriage road temporarily, we opted to take South Mountain Trail up to the fire tower.  It seemed steeper than it should have felt and one of the pitches was straight dirt.  Makes me wonder how long before erosion has its way with the trail. 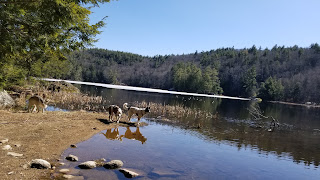 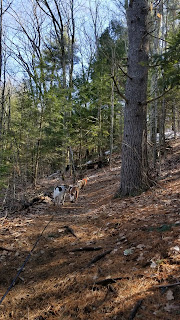 The trail took some nice breaks, crossed a stream, and continued upwards, more gently towards the top.  Below the tower was nice and open but hosted a handful of people  so we walked over to the open slabs adjacent but devoid of other hikers.  Hannah put in a valiant effort to snap a photo of me with the dogs but I have uncooperative canines and a disappointing lack of understanding of how a real camera works. 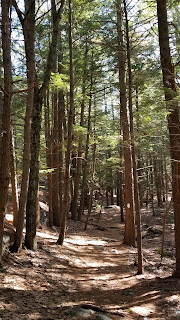 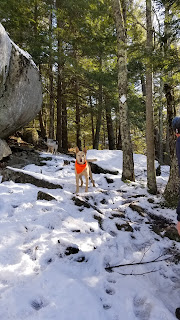 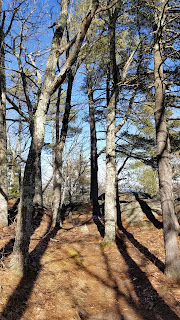 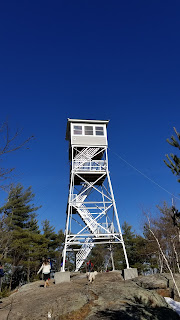 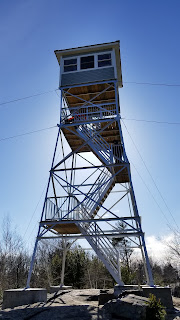 Because one tower picture isn't enough 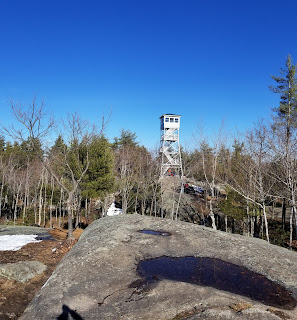 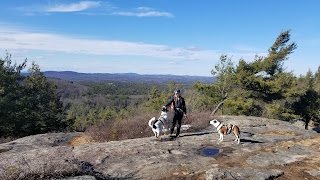 From there we made our descent.  The woods were fairly open, I suppose allowing for lots of scent to travel because again Ty and Titus had their noses to the sky.  On that side was also the only place we encountered thick ice as it cascaded over roots.  Winter is barely hanging on! 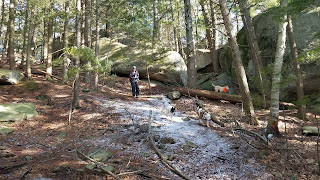 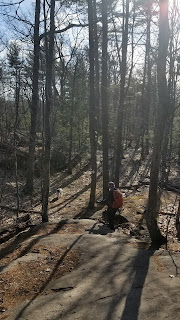 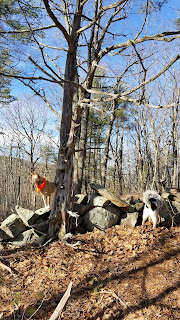 We bottomed out and took Tower Road to Reservation Road to reach the cars.

As much as I originally wanted to summit a 4K, Pawtuckaway was exactly what we needed.  I felt accomplished after the 8-point-something miles involving two smaller peaks, Ty got to run around like the crazy dingo she is, and it was another moderate but enjoyable challenge for Tango.  We love this park because there is so much to explore, especially during the off season when it's quieter and dogs are permitted on more of the trails. We plan to return for more time around the marshes and boulders because Ty absolutely loves them, although we may wait til the porcupines are not just coming out of hibernation!  It was a wonderful, strange trip with Hannah and her pups and I’m thrilled beyond words everyone had a fun time!