Avoiding the crowds on Gunstock 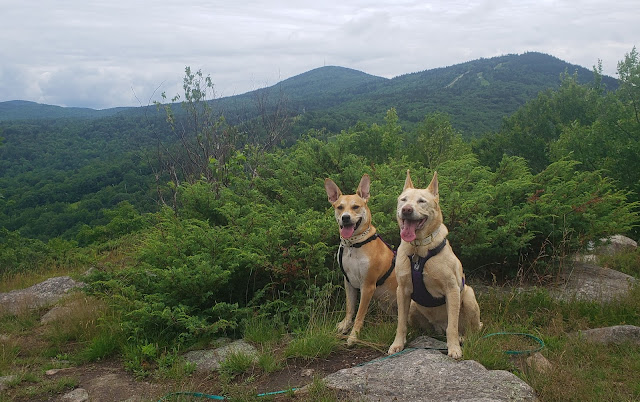 We recently had the great fortune to take a weekday hike with our friends, beginning under cloud covered skies and ending with sunshine, summiting Rowe and Gunstock in Gilford.
Route: (loosely) Access Rd to Rowe summit (1680') - Belknap Range Trail - Access Rd/ski trails - Gunstock summit (2244'), Access roads/ski trails to the base.
Mileage: appx 4.3 miles
Favorite features: great footing, variety of open meadow and wooded environments, blueberry bushes, ledgey ridge walking without the crowds.
Another not-so-precise trip report!  From the parking lot for the ski area, follow the road that skirts behind the main building, towards the playground and take a left - up the hill.  Here begins the unpaved access road that we took all the way to the summit of Rowe.  It begins fairly steep but easily navigable, even for clumsy feet, over gravel and packed earth.  There are bypasses that go through the woods but we opted to stick with the road.  It's a nice treat to be able to talk with your hiking companion without having to crane your neck back or have your doggo on a long line without constantly untangling yourself from trees! 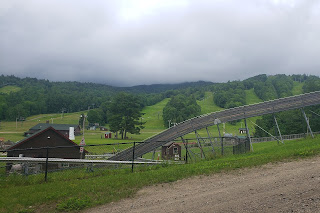 The summit of Rowe has some cell tower equipment but is otherwise, no offense Rowe, unremarkable.  However, upon re-entering the woods (watch for the post and blazing), we began a pretty, low ridge walk that eventually opened onto blueberry ledges. They were perfectly ripe and it was very difficult to avoid lingering!  After some nice views of our target summit and the lake, we re-entered the woods but again, were repeatedly treated to blueberries and smooth ledge walking surfaces. 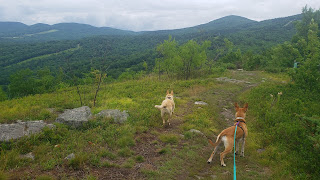 Eventually - probably earlier than intended by trail managers - we popped out onto the ski trails, which we took for the remainder of the hike.  We were lucky and some of the water bars had just enough to re-hydrate the dogs.  This is a brutal section under sunny skies but we were protected by the clouds this time.  As the chair lifts come into sight, the grade steepens and the thought "oh yeah, 'up!'" comes to mind. To be sure, there are short breaks in the grade that are just as appreciated going up on foot as they are for novice skiers like me going down! 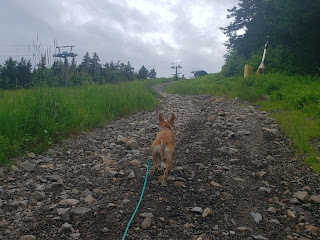 We bailed shortly before the lodge, following the road around to the right and stopping for a snack, before opting to head down the ski trail in front of us (looking down the mountain - left of the one we took up).  It looks like we followed the dotted blue line on the map below but I can't be certain.  This one was a little less gravel road and a little more meadow-y.  The upper 2/3 or so are mostly packed dirt and grass with some slick ledgy rocks - and narrower than the trail up.  We noticed flagging in a couple of places that indicated small footpaths that led back to the wooded trail.  Eventually, Hannah noticed the large sign to the left that notifies hiker of the Belknap Range trail system but we decided to stick with the pretty, open meadow walk with the lake views that eventually curved around to the access road to finish our descent to the base - further center and closer to the parking lot than where we embarked from. 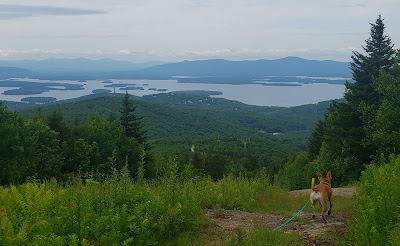 It was the perfect afternoon hike for our crew! 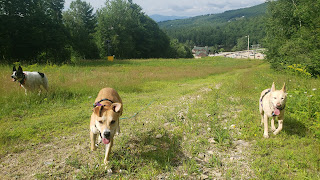 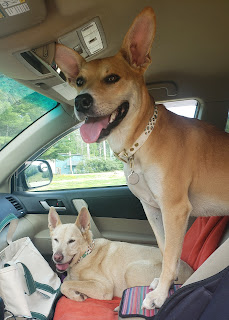 I love this hike; the Belknaps in general are a go-to that I best not take for granted.  While Gunstock is open for summer activities, it was easy enough to skirt around the families and head straight up. While I have been caught off guard by the number of other hikers encountered on a couple of occassions (still single digits), we passed exactly zero others today (not counting the handful of folks at the summit, many of whom took the chair lift, who we never interacted with).  Bonus feature: there are many other trails that start from Gunstock, allowing for on the fly target modifications, if needed.
The footing, even when damp as it was on Monday (and why we sought a hike with good footing), is as good as it gets for a hike in NH with elevation changes.  While the beginning of Rowe and summit of Gunstock are steep, they're not Tuckerman steep and could be compared to the Mt. Major Trail on its namesake peak (without the ledges) or Hedgehog.  I'd say this hike is one of the best as far as consistently good footing goes - while the gravel can be a little loose, there's no rocky sections, no scrambles, nothing my arthritic dogs can't do comfortably - and while I deeply miss Caps Ridge, it just doesn't get any better than Rowe/Gunstock these days.  The fact that there's some choice in when to pop on and off the wooded and ski trails is also nice, allowing us to be flexible without changing the overall plan - it all meets back together.  Whether it's to be able to make a quick bail or simply switch up the scenery, that's a feature I've come to love in a hike!
Online resources:
Belknap Range Trail Tenders: https://belknaprangetrails.org/belknap-range-trail-map/
Gunstock trail map: https://www.gunstock.com/upload/photos/page_111_hiking-trail_map-8.5x11-compressed.pdf
Posted by pawsonpeaks at 1:40:00 PM