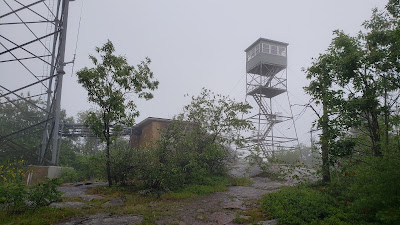 Blue Job (1356') is a well-loved and unbeatable "bang for your buck" small hike straddling Farmington and Strafford, NH.  The most popular loop covers Blue Job, with its climbable fire tower, and the ledgey, open Little Blue Job, with its distant but lovely view of the White Mountains.

Description: The hike overall is a very pleasant and easy one.  There are still ascents to be had but for context, Blue Job is similar to the hikes around Pawtuckaway and Agamenticus.  Terrain is generally packed dirt, though there are heavily eroded sections with lots of roots and some looser gravel on Little Blue Job.  Closer to each summit are ledgey sections of smooth, exposed rock. At no point would I consider the described sections of trails rocky or steep.  Part of the northern section of the Fire Tower Loop is even an old, crumbling asphalt road.  There's a bunch of super helpful descriptions out there so mine will mostly be in picture format :)

Fire Tower Loop (taking a left from the lot) to the junction with Little Blue Job Trail: easy through open woods, usually a brook for the doggos (dry in 7/21, even with the rain).

Fire Tower Loop to summit: Mostly wide trail that weaves up the mountain past a couple of blocked, private trails and blueberry bushes.  Brook in non-summer months towards the bottom. 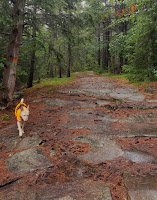 Little Blue Job to Pond Trail: Largely flat or rolling trail through open woods.  One large, fairly recent blowdown. Fun pond and unofficial trail around it, as well as many herd paths that cut up the side of Little Blue Job and meet back with the main trail. 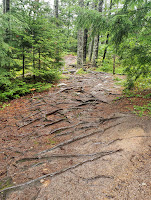 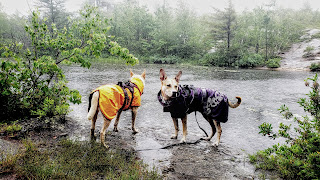 Pond Trail to Blue Job Summit: This section had the most terrain variety during today's meander.  We went from smooth ledge to rolling dirt paths to some briefly steeper, exposed ledgy sections.  (These get super icy in winter.) 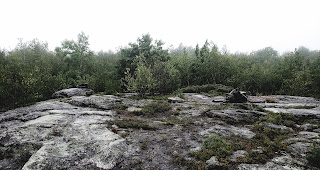 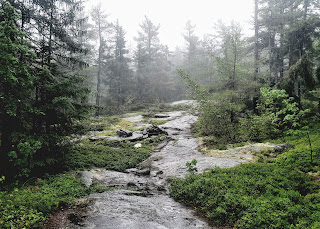 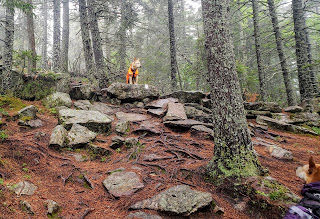 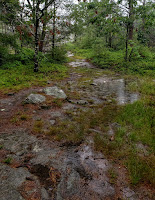 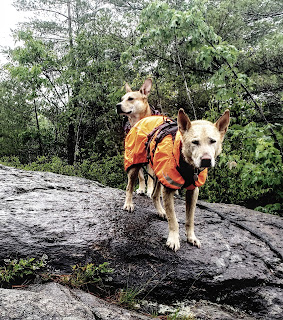 Summary and notes: On paper, it might not look like much but you can get in a little elevation, great views, and wonderful variety at Blue Job.  Everyone, from seasoned hiker dog Ty to less-outdoorsy friends, find Blue Job engaging and enjoyable year-round.  It's understandable why it's so popular and that's why I tend to go at off-hours (and still tend to encounter up to a dozen fellow visitors), especially where Arya is doing so well with her training and I don't want to take a step backwards with too many dog-dog interactions on one hike.  It's reasonably well marked, with off-limits trails being specified as such, but the numerous herd paths ascending Little Blue Job can throw off a new visitor - know that they all meet up where they should!  After finally looking at a map while writing, I realized that some of the trails that didn't seem 'official' actually are, so it appears we have some more exploring to do!  Someday, I'll report on those and the more standard loop over both peaks! (Although NHFH gives a great description of the latter here.)

Map credit to the Town of Farmington 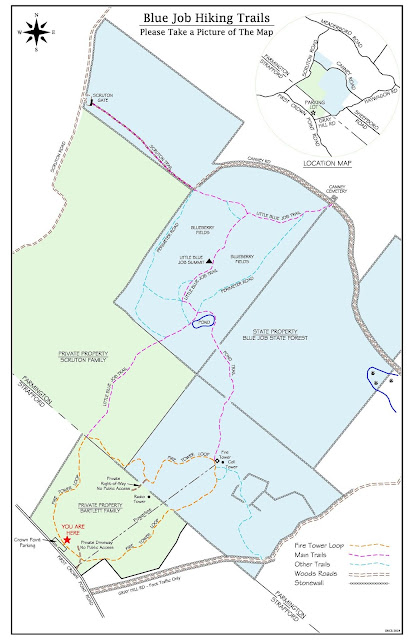