Dayhiking the Weekend Away 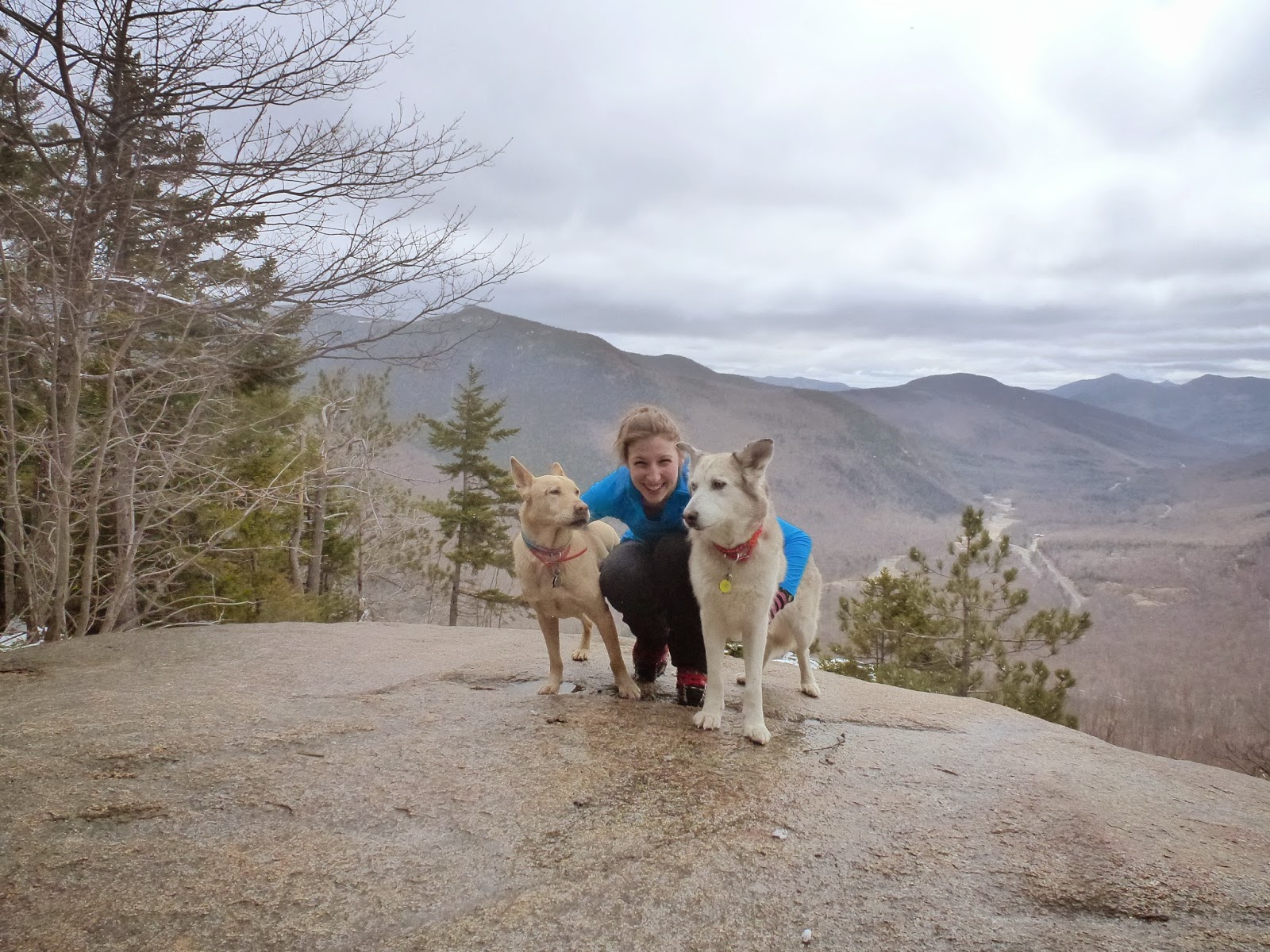 Saturday, Linda, Tybtangs, and I did a loop around Frankenstein Cliffs and Arethusa Falls then headed south to the Four Thousand Footer awards ceremony in Stratham where Tybtangs and I received our scrolls.  Sunday we trekked to the base of Tuckerman’s Ravine to watch the skiers.  The weekend reminded me of how special being out there with the dogs and bipedal loved ones is, how far we’ve come, and how completing “the list” was more of a starting point than a finish line.

This hike is a really neat half-day experience with unique features and a nice variety of terrain.  We opted to go counterclockwise to avoid having to descend the steepest section in questionable spring conditions.  We parked at the lower lot where Ty had some of the craziest zoomies I’d ever seen from her.  Shortly after beginning, the trail crosses a trickle of water (really, I know minimal hiking terminology, I just put one foot in front of the other in the direction the dogs are going!)  At that point we managed to find ourselves walking the tracks instead of following the trail (which runs parallel).  At the trestle, there is a well-trodden path back to the trail.  We passed the point where it picks back up with the trail to check out the trestle, only finding the “keep away from trestle” sign on the ground up the hill afterwards…. 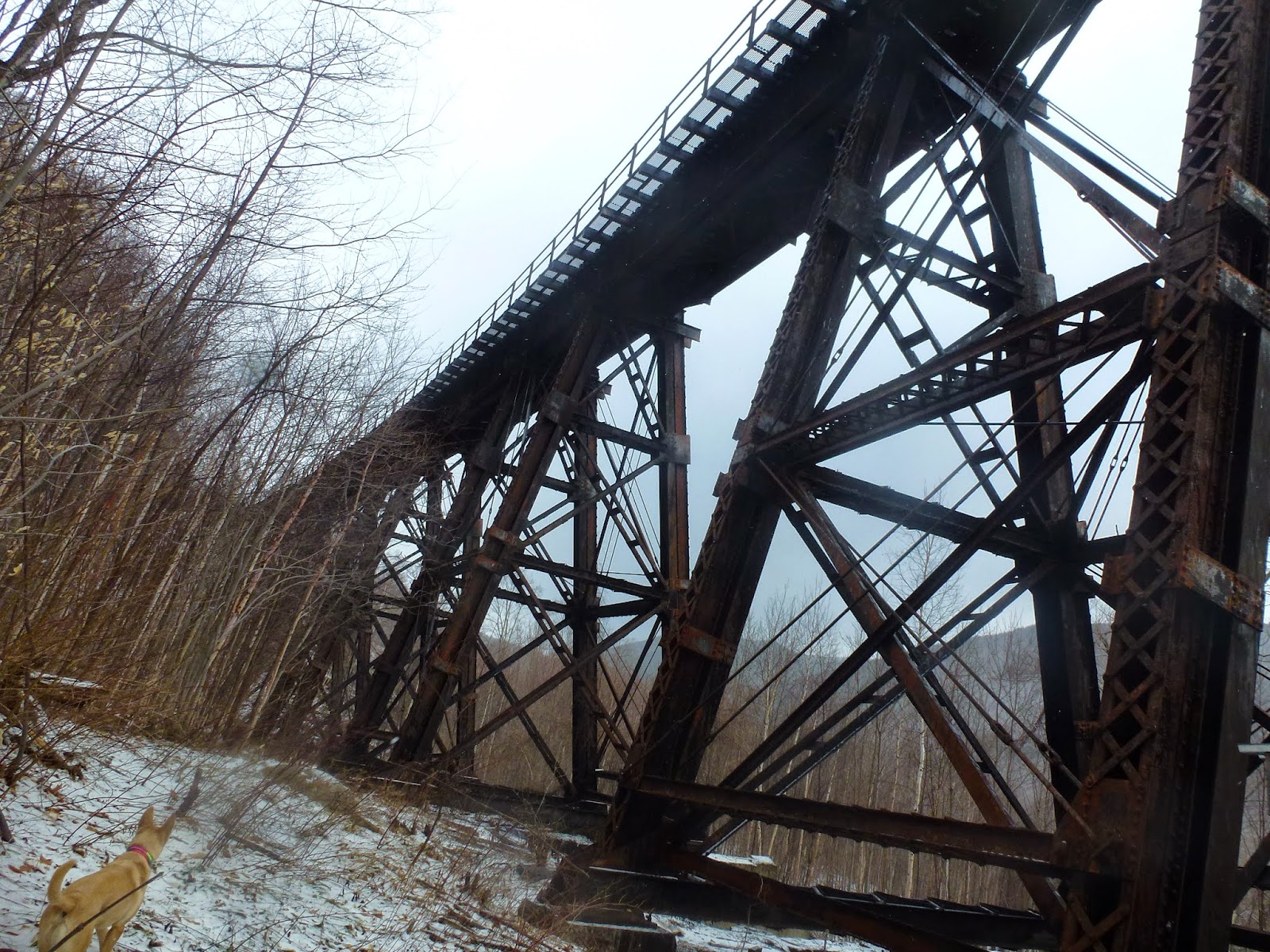 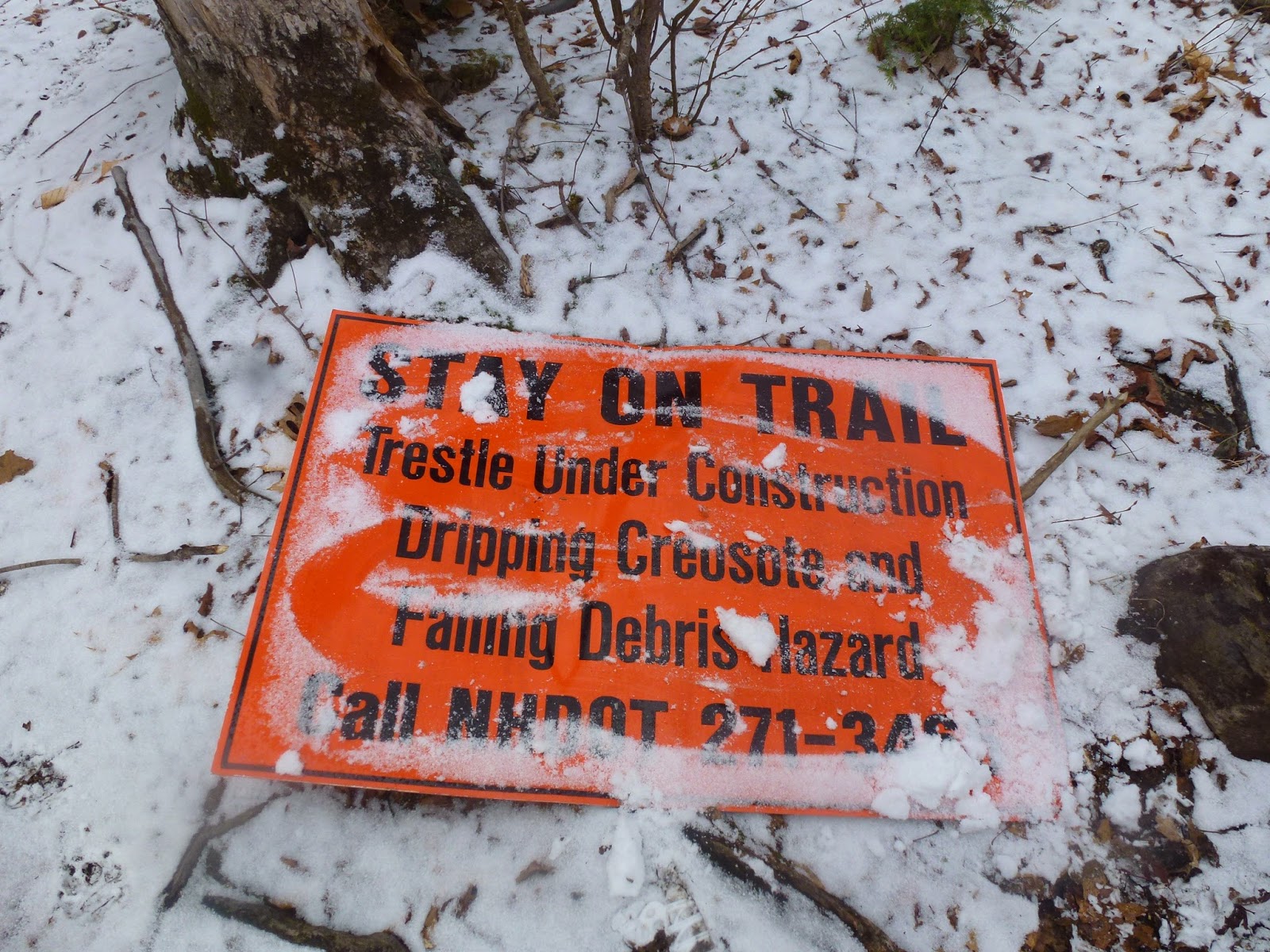 The trail quickly becomes moderate in grade then quite steep as you look up at staggering views of the cliff walls and melting ice.  With a fine layer of fresh, wet snow underfoot, we were happy with our decision to go counterclockwise!  After veering away from the rock faces, the grade drops down to a gentle incline.  We reached an unmarked junction, had a gut feeling to go left, and explored to the right instead.  Then we lost that trail and ended up bushwhacking….  Being not far from the car, having many landmarks, and under good weather and trail conditions, we figured this was as good a day as any to get a little lost and have to right ourselves.  We ascended off trail for a bit, moving closer to what I thought might be the base of Falcon Cliff.  I looked ahead and the dogs had made a 270 degree turn and were waiting for me to make eye contact with an expression that made me tell Linda I was abandoning our attempt to wander.  Five minutes later, we were back on the correct trail and headed towards the cliffs. 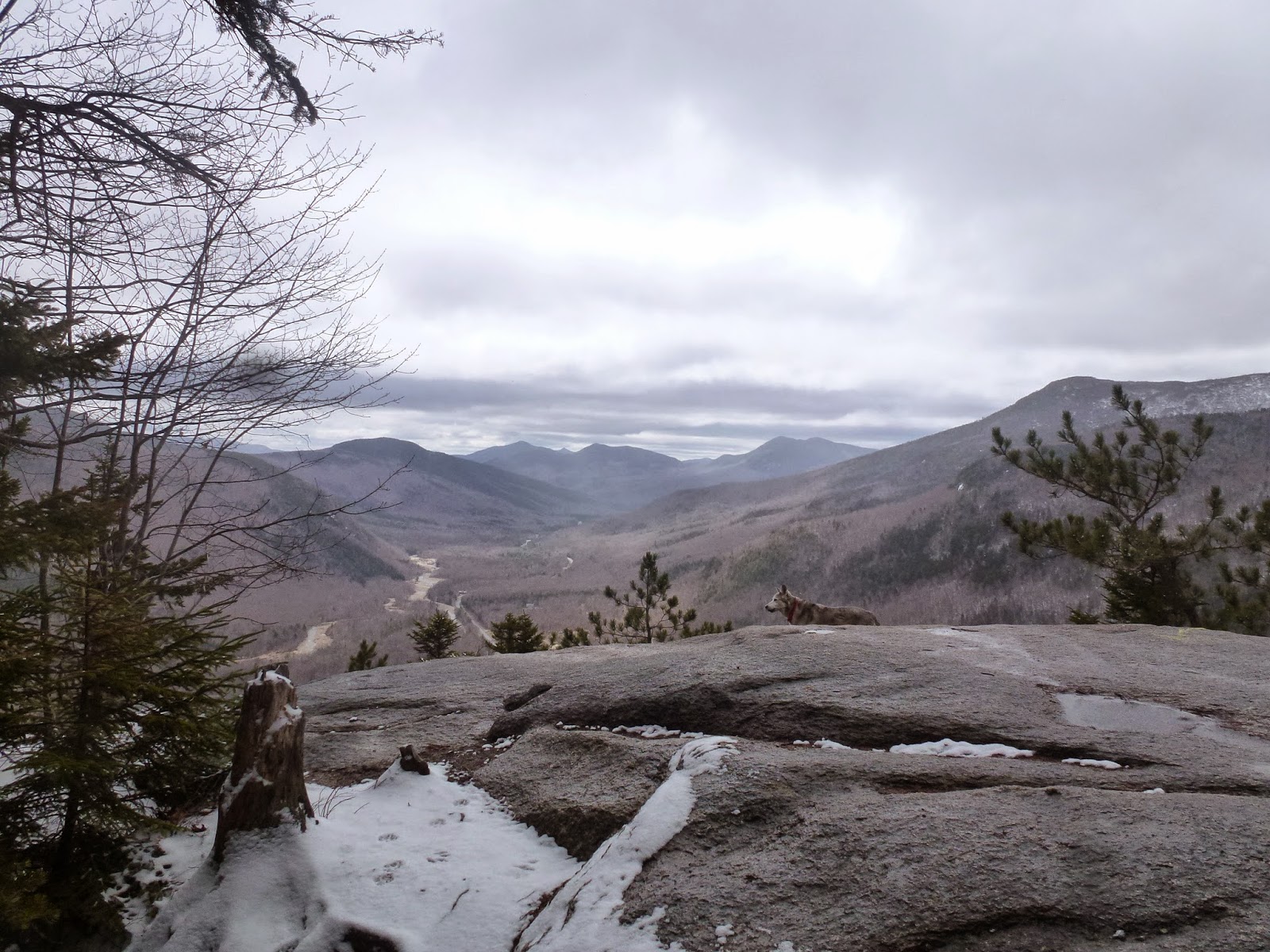 The trail ascends into eerily beautiful conifer woods - skinny limbs covered in moss and lichen rising from a ground cover of fallen trees.  It opens up quickly onto the outlook where we took a ton of photos.  From there, the trail continues on, gently ascending to a junction where one can do a spur to Falcon Cliff (we skipped it) then another outlook that was socked in when we passed.  After that, the trail begins descending.  As with the ascent, it varies smoothly between sections of flat and gently changing elevation.  The tree cover also changes and after a water crossing close to the junction for Arethusa Falls, the trail follows the river and I’ll tell you, after such a long winter, there’s not a sound in the world that sounds better than rushing water! 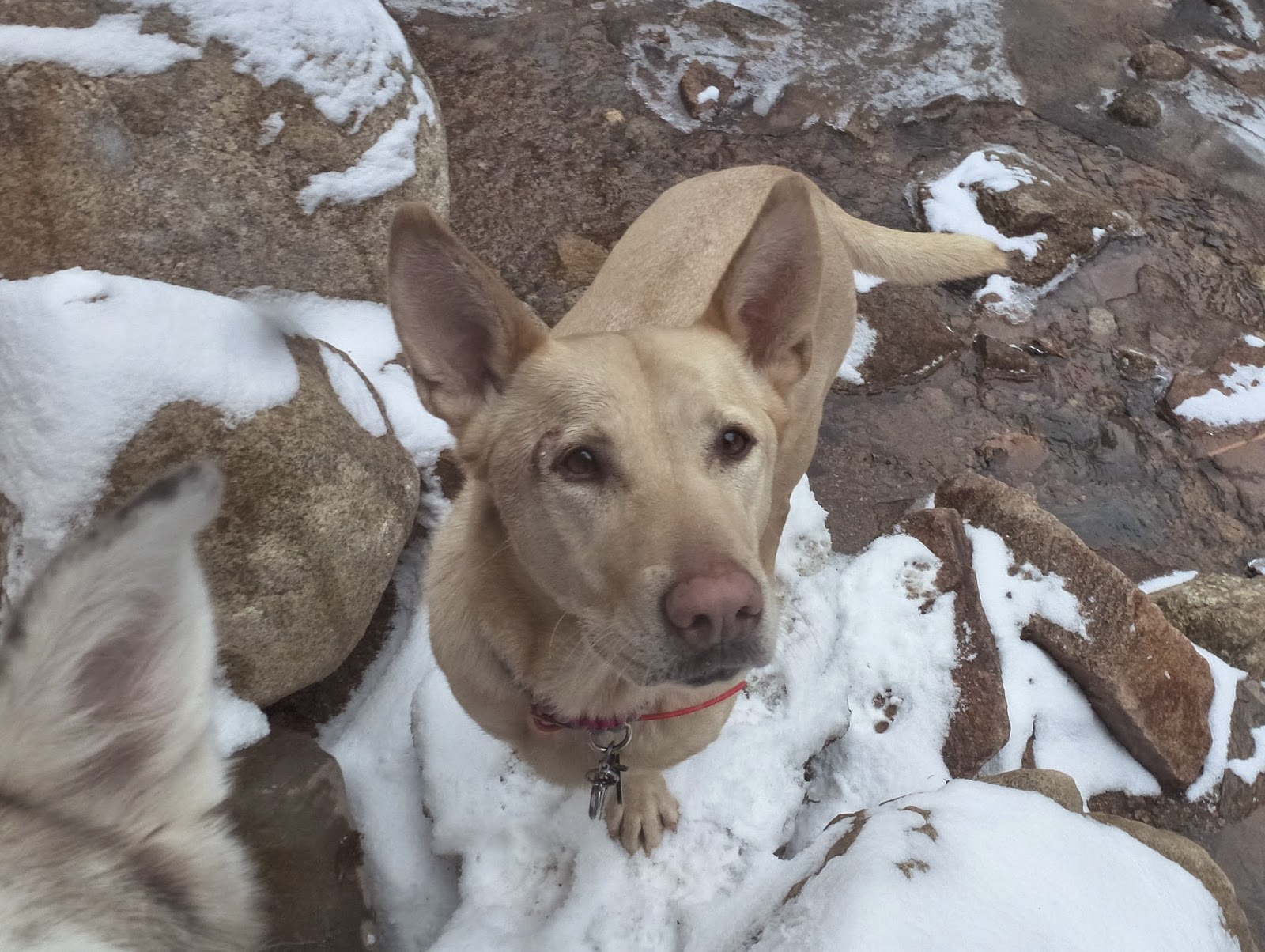 The trail to the falls, while very well maintained, is incredibly slick right now due to the high volume of traffic.  Very few of the people and families we saw were prepared in any way.  It’s still winter in the north folks!  Jeans and sneakers will not cut it….  The falls themselves are really cool to see and make me pine for summer and swimming season.  We stuck to the Arethusa Falls Trail to get back to the car and were treated with some stretches of DRY DIRT trails! 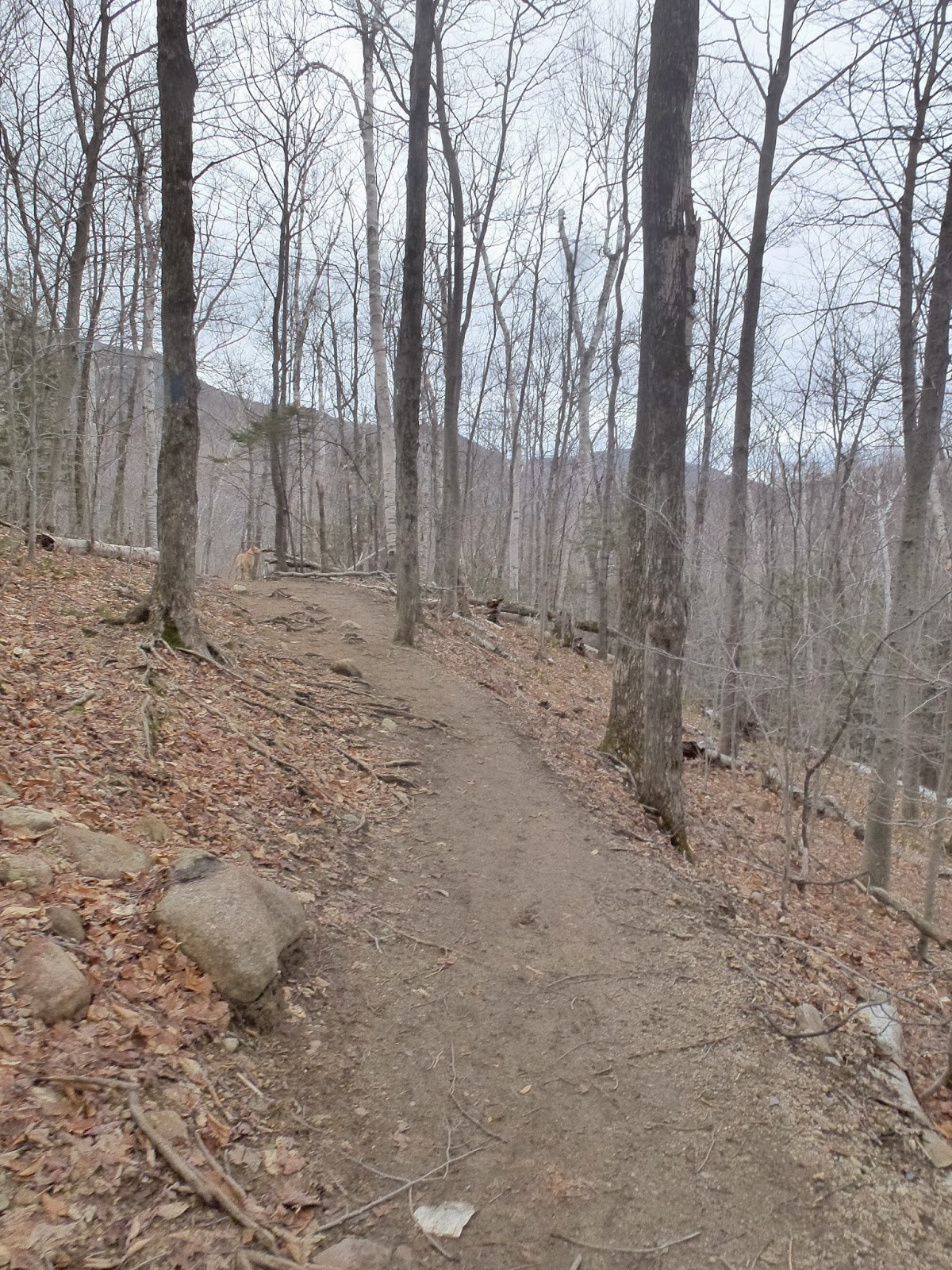 Next on the agenda was the AMC’s Four Thousand Footer Award Ceremony.  I’ll breeze through this, as it is mostly for my own benefit, but I will say that if you are working on any of the lists recognized by the AMC and are on the fence about attending the meeting, I strongly suggest you consider going.   The Board spends a great deal of time and heart acknowledging the accomplishment.  The authors of It’s Not About the Hike presented a slideshow of photos submitted by this year’s inductees (Ty, Tango, and I included) that had tears welling up in my eyes.  Linda was with me and I absolutely freaked out when they included a photo of us, the dogs, and our friends Liz and Shawn sitting atop the rock pile on Hale.  It also made me want to run outside to the dogs because we did this 100% together.  It was a chance to meet some of the folks I knew only through the hiking groups online too.  A hike and hiking ceremony in one day was both incredible and exhausting and I was asleep soon after our return home. 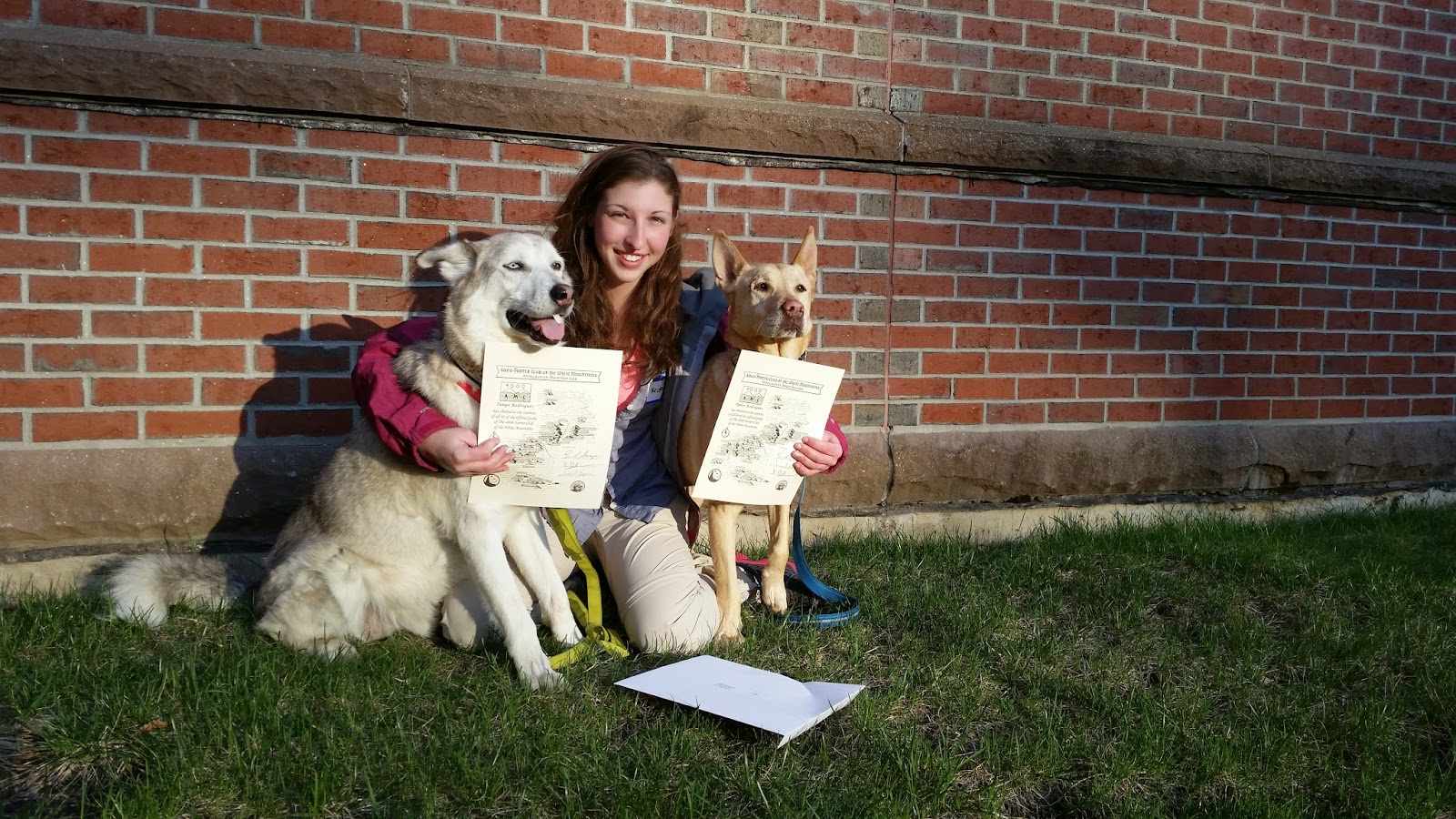 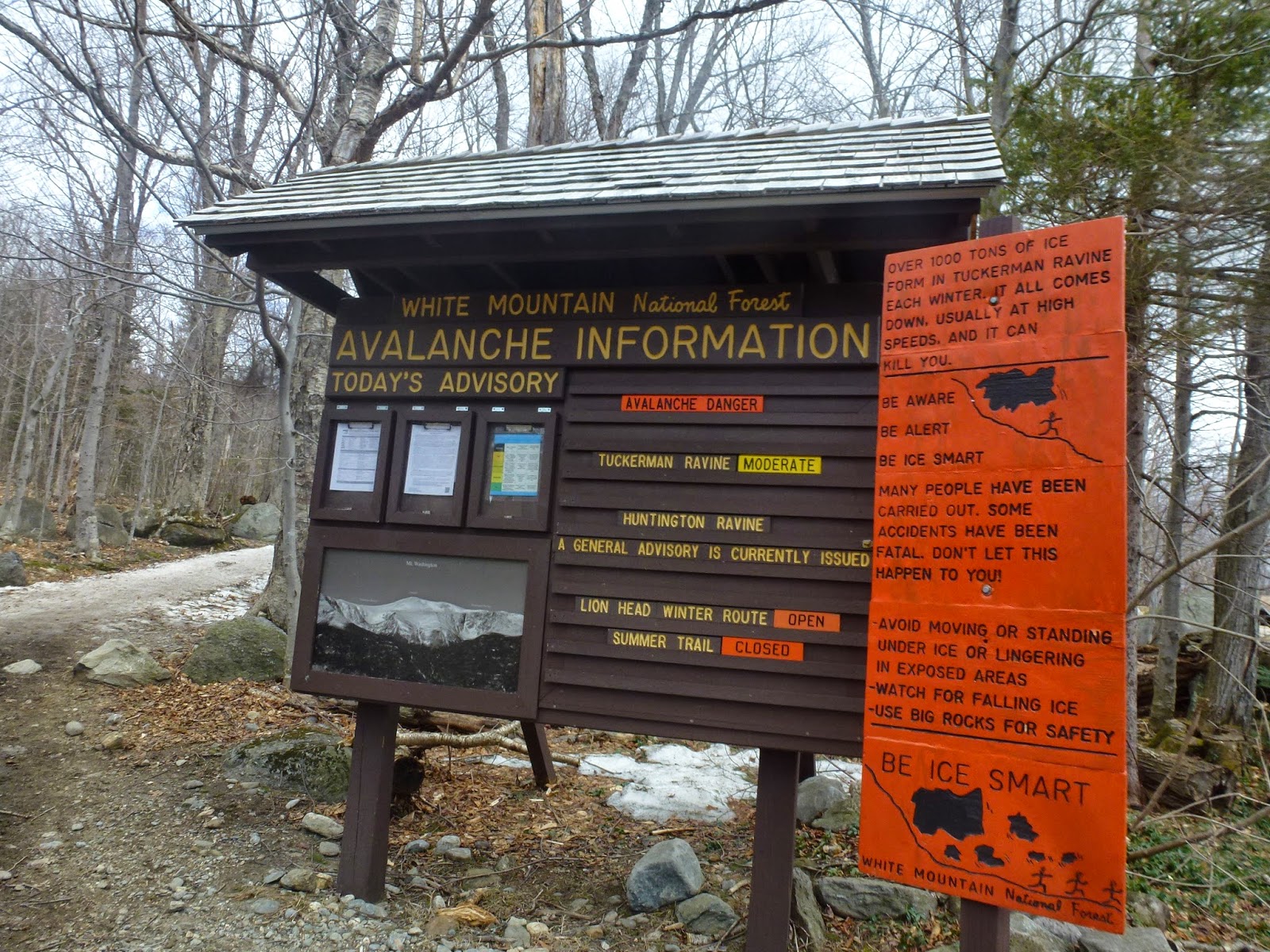 Ah but the weekend was not over!  Our original plan was to hike to the bottom of the bowl to watch the skiers and boarders and were watching all the weather and avalanche pages closely.  We hemmed and hawed, skipped the turn for 16, went down to the junction with Conway then took a hard right back onto 16 towards North Conway and up to Pinkham’s.  Best decision of the weekend! 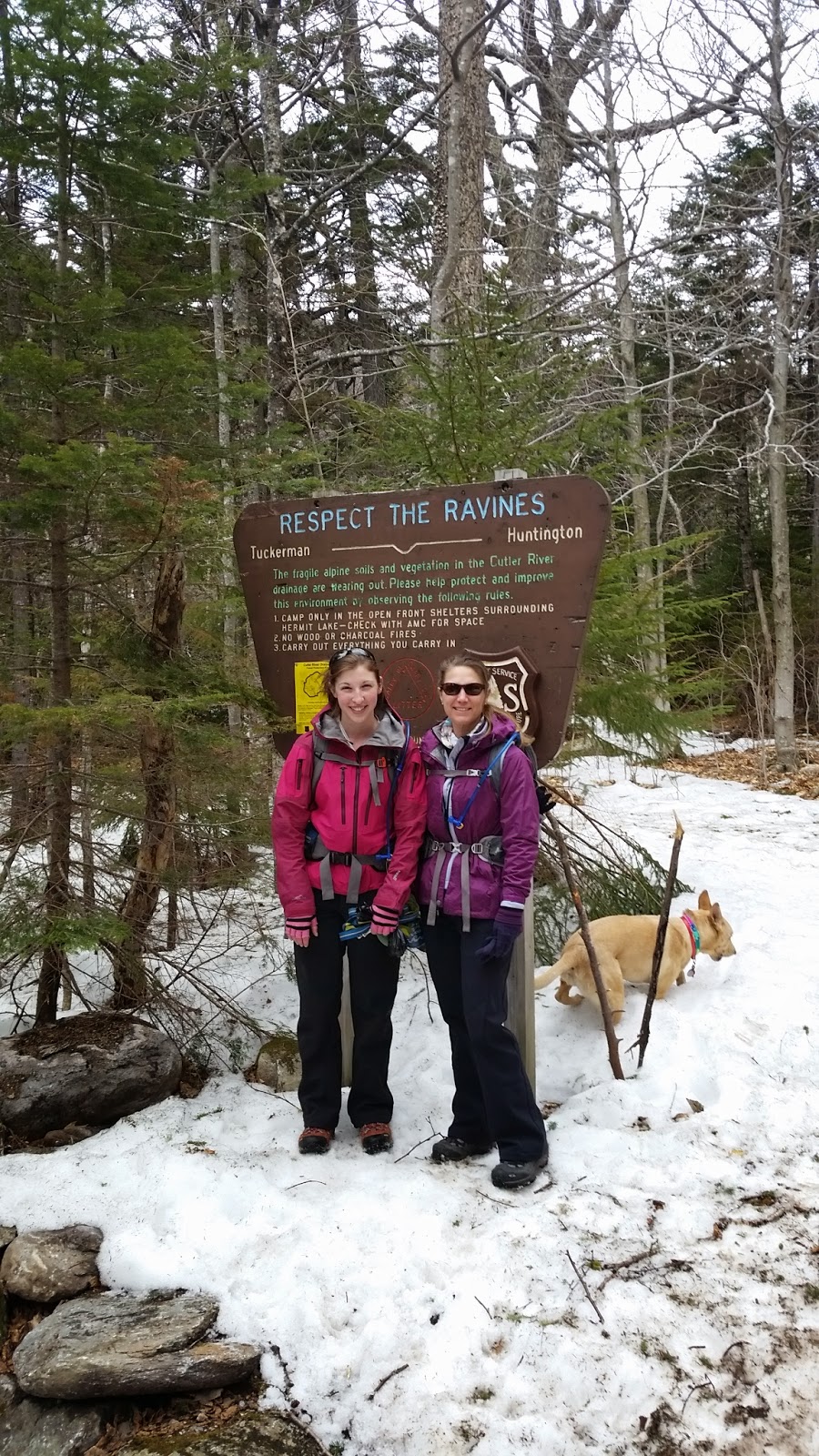 The Tuckerman’s Ravine Trail begins at the Pinkham Notch Visitor Center.  I love the current conditions.  It is such a well-traveled trail and free of postholes, that it is mud and soft but easy to walk on snow below (bare boots or micros will do) and hard packed (but slushy as the day warms) above.  The trail is wondrously wide.  We passed and were passed by many others but it never felt crowded, unlike most of the one-lane trails in the Whites.  If you have read other descriptions of the Tuck’s trail, they’re all right – a steady but relentless grade.  There are no steep sections but also few sections where it levels out.  It is only 2 miles and change to the shelter though and goes pretty quickly. 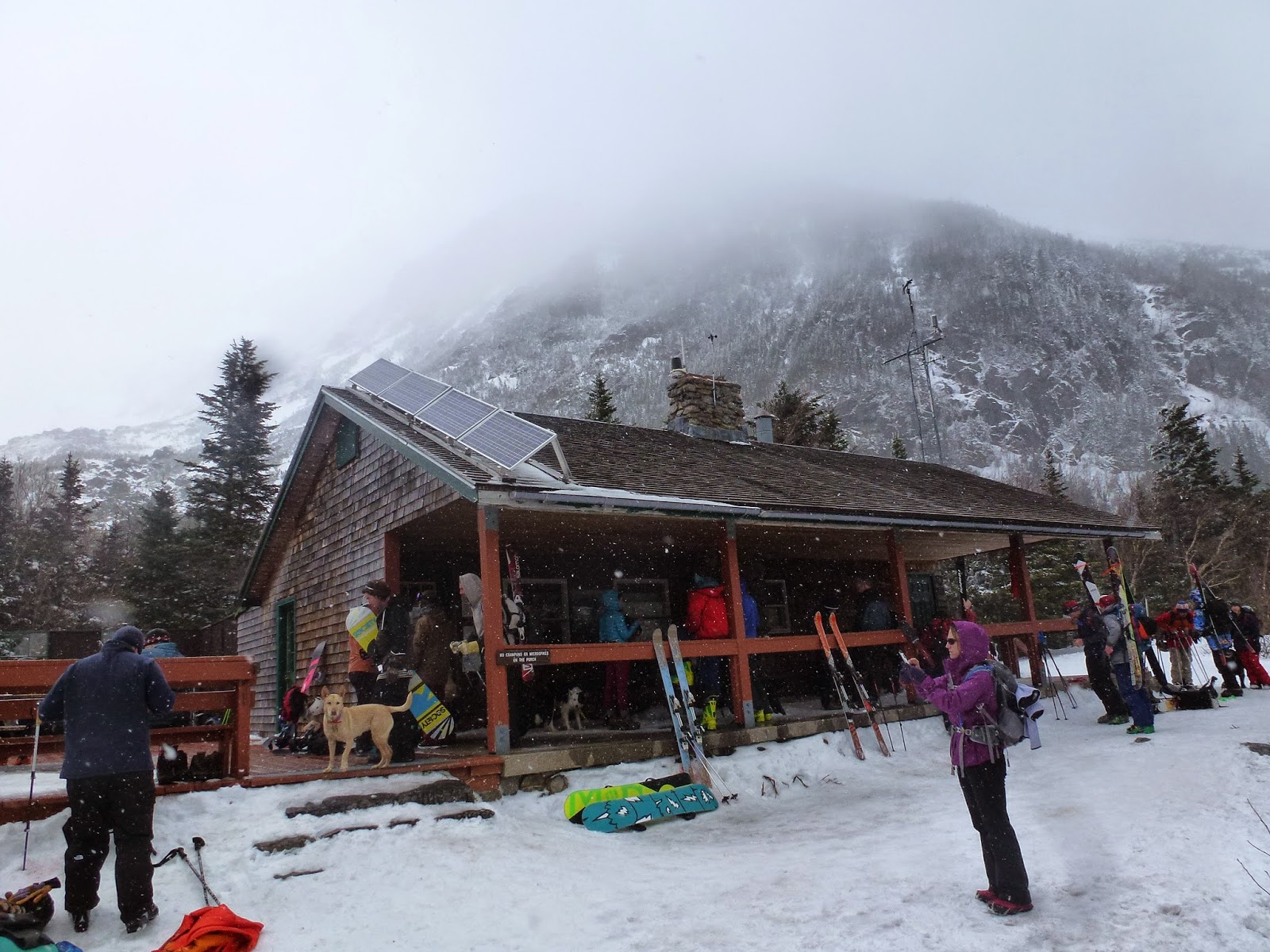 The Hermit Lake Shelter was buzzing and there was a Ranger advising skiers and boarders about conditions.  Cool stuff!  This was a totally different kind of hiking experience and something Linda and I agreed we most definitely want to do again.  At the shelter, we changed gear before heading to the base of the bowl.  It is very steep at first, making me question if I’d led us onto the right trail.  It is stunning though, trees frosted with fresh snow, rocks strewn everywhere, everything that puts us in awe but also makes us excited for summer hiking! 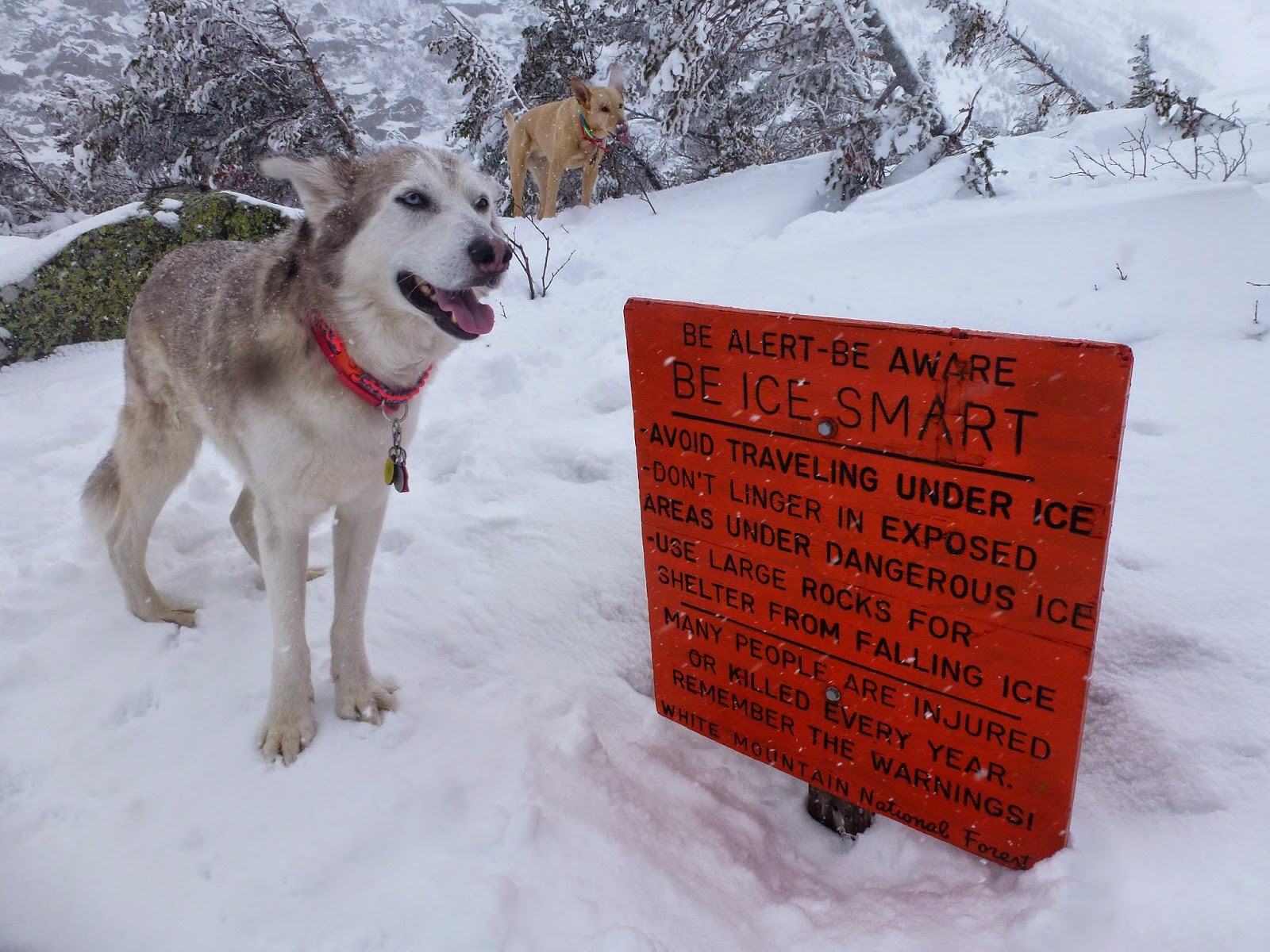 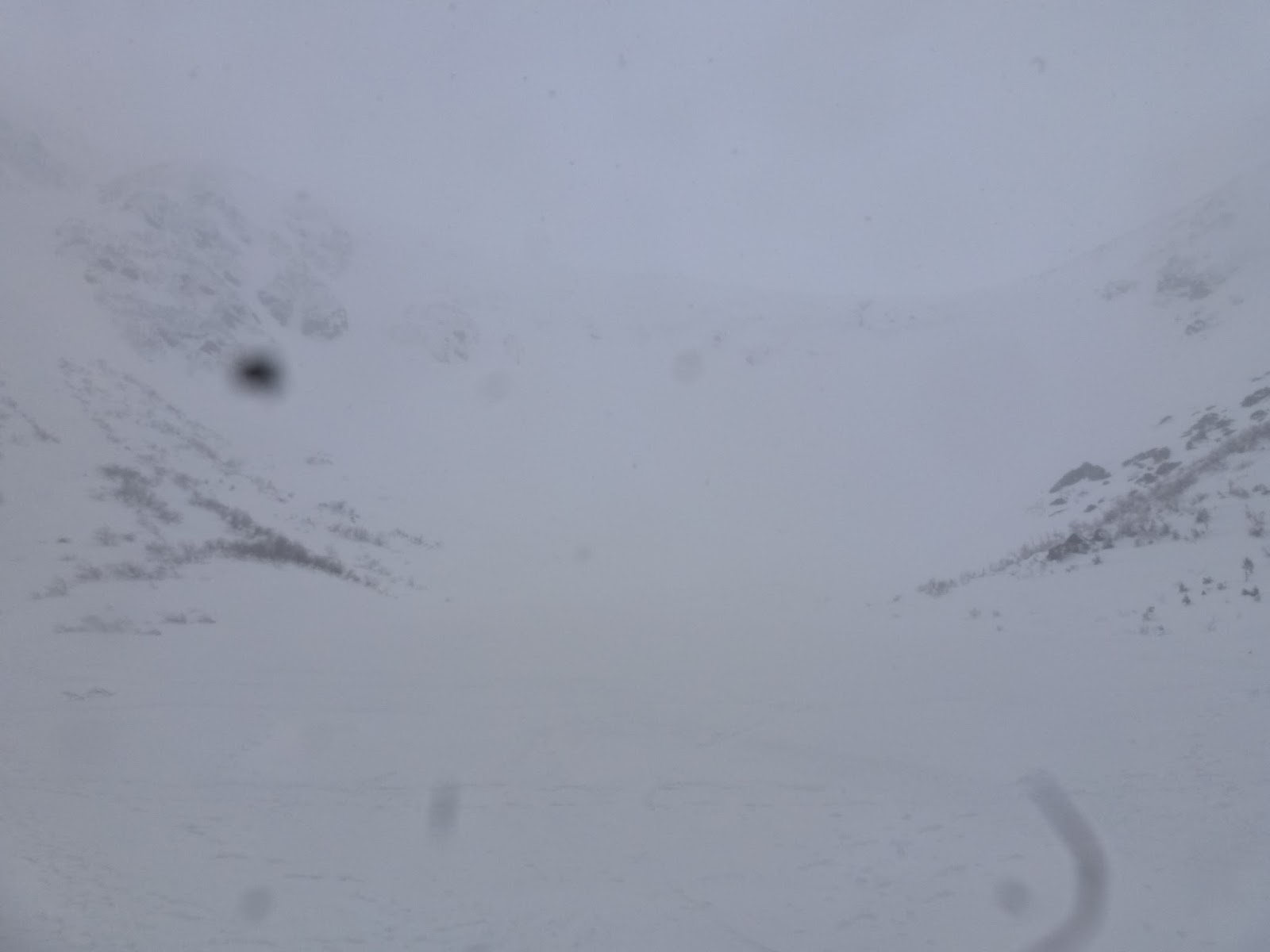 Then, there it was: Tuckerman’s Ravine.  Even in the thick fog, we could see the top of the headwall looming above.  I have never been anywhere like it.  The base is broad and people were gathered in small groups discussing different approaches.  The trek up looks grueling and we did not get to see many folks reach the top of the runs and head down while we were there (many were on their way up when we decided to turn back) but it was so fun.  This was also a particularly dog-friendly day which was awesome!  We booked it back, enjoying the sun that decided to come out and the perfect grade for sliding on our heels.  We checked out the very hospitable visitor center then headed home. 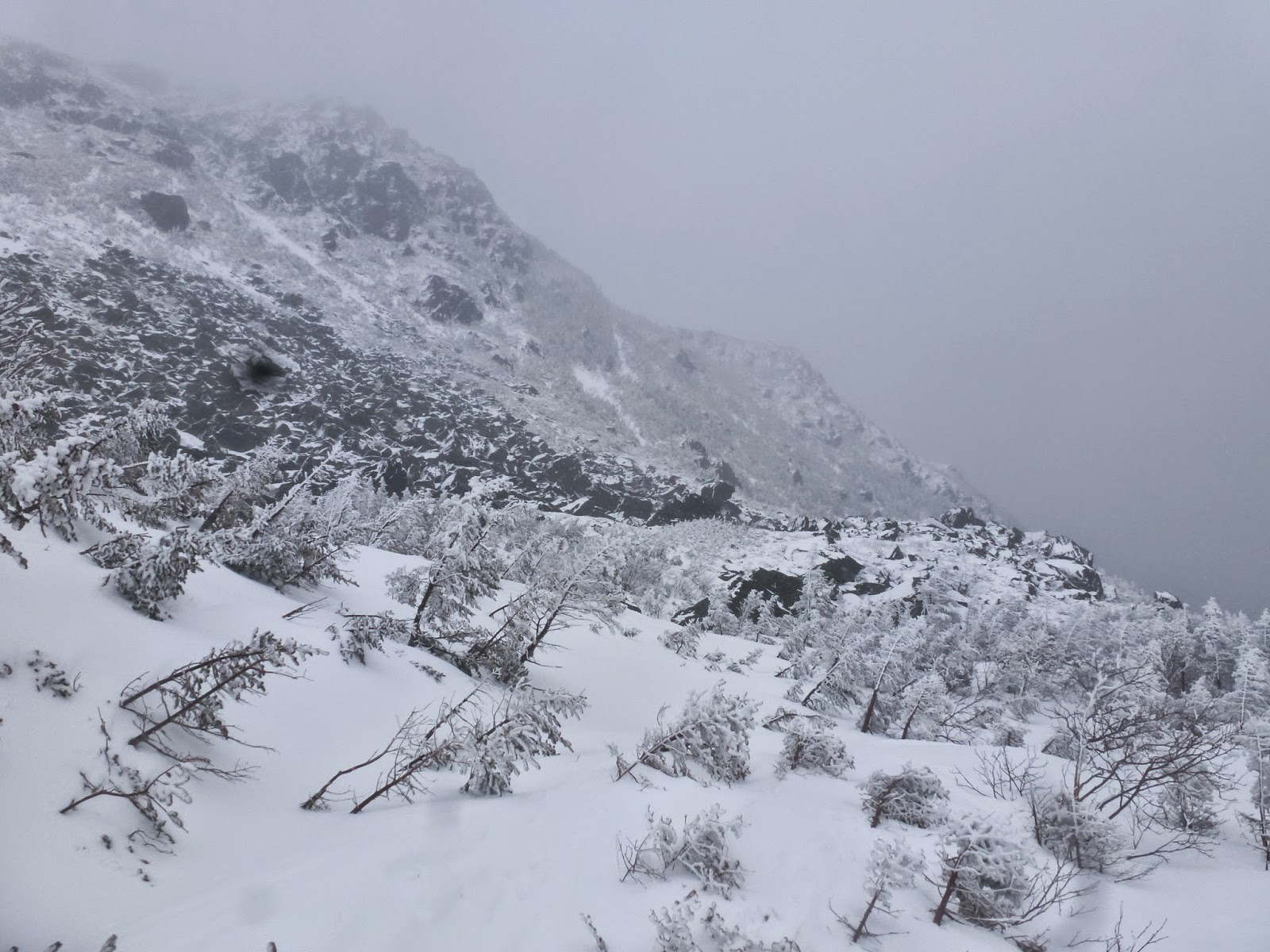 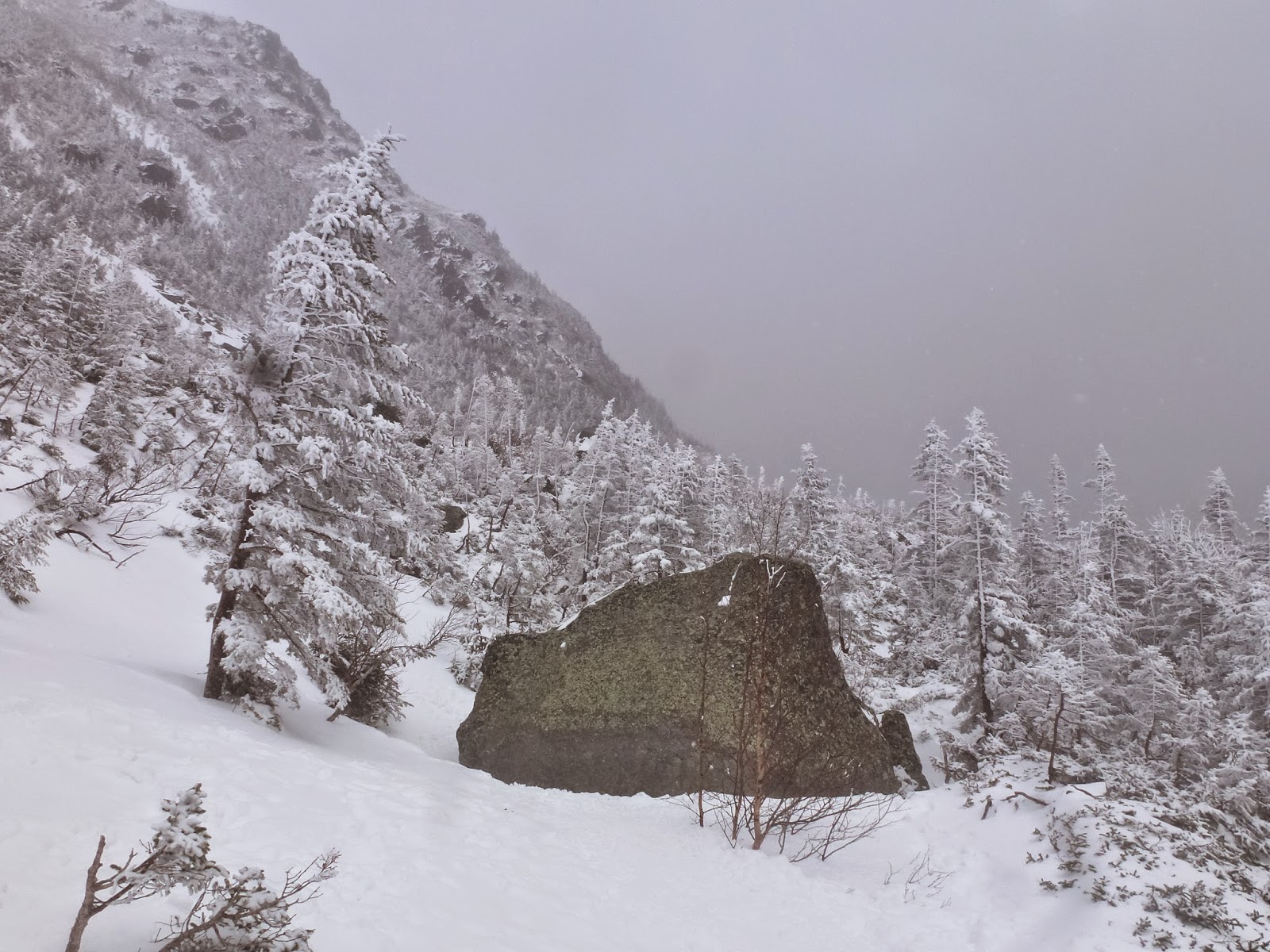 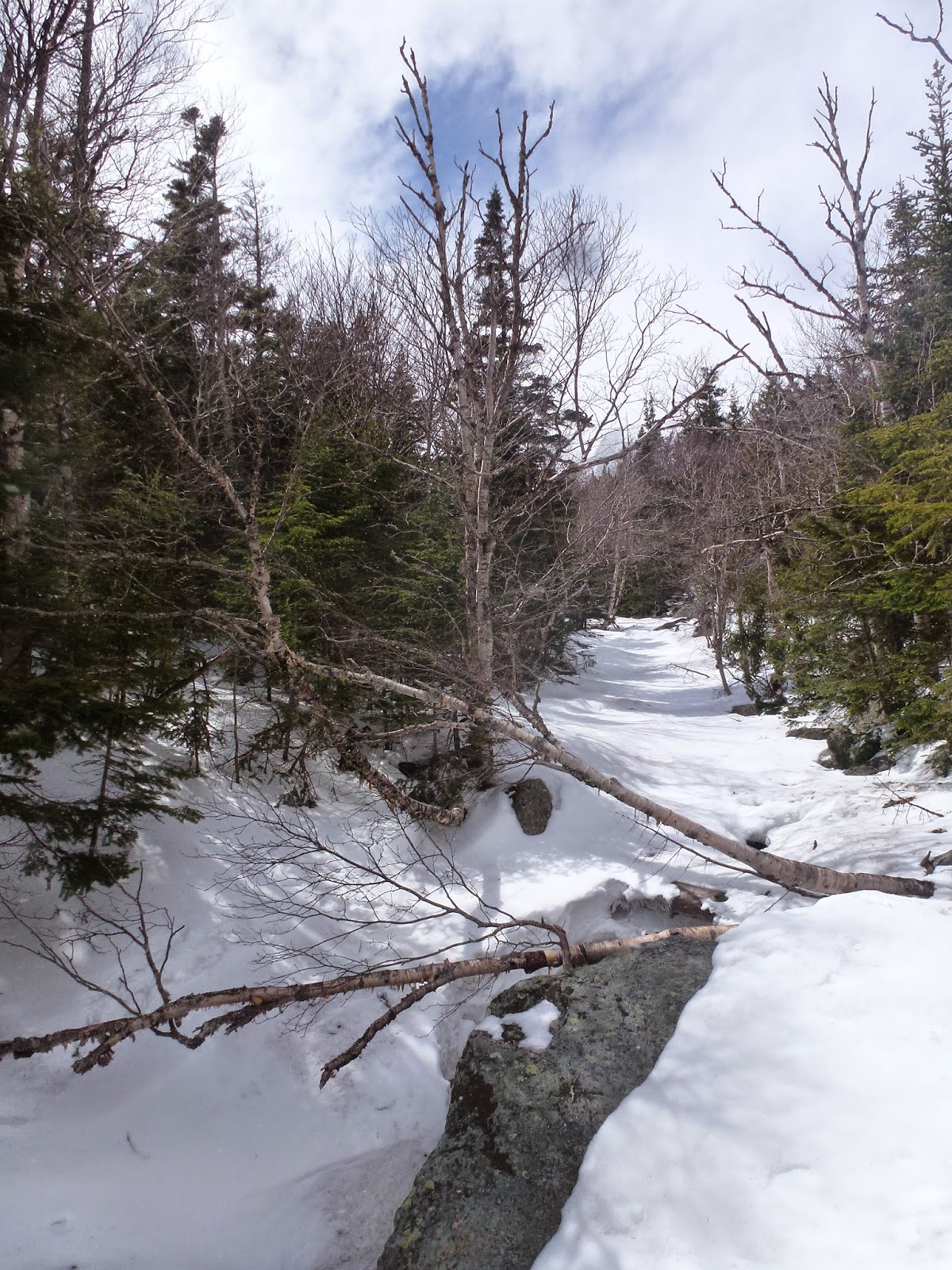 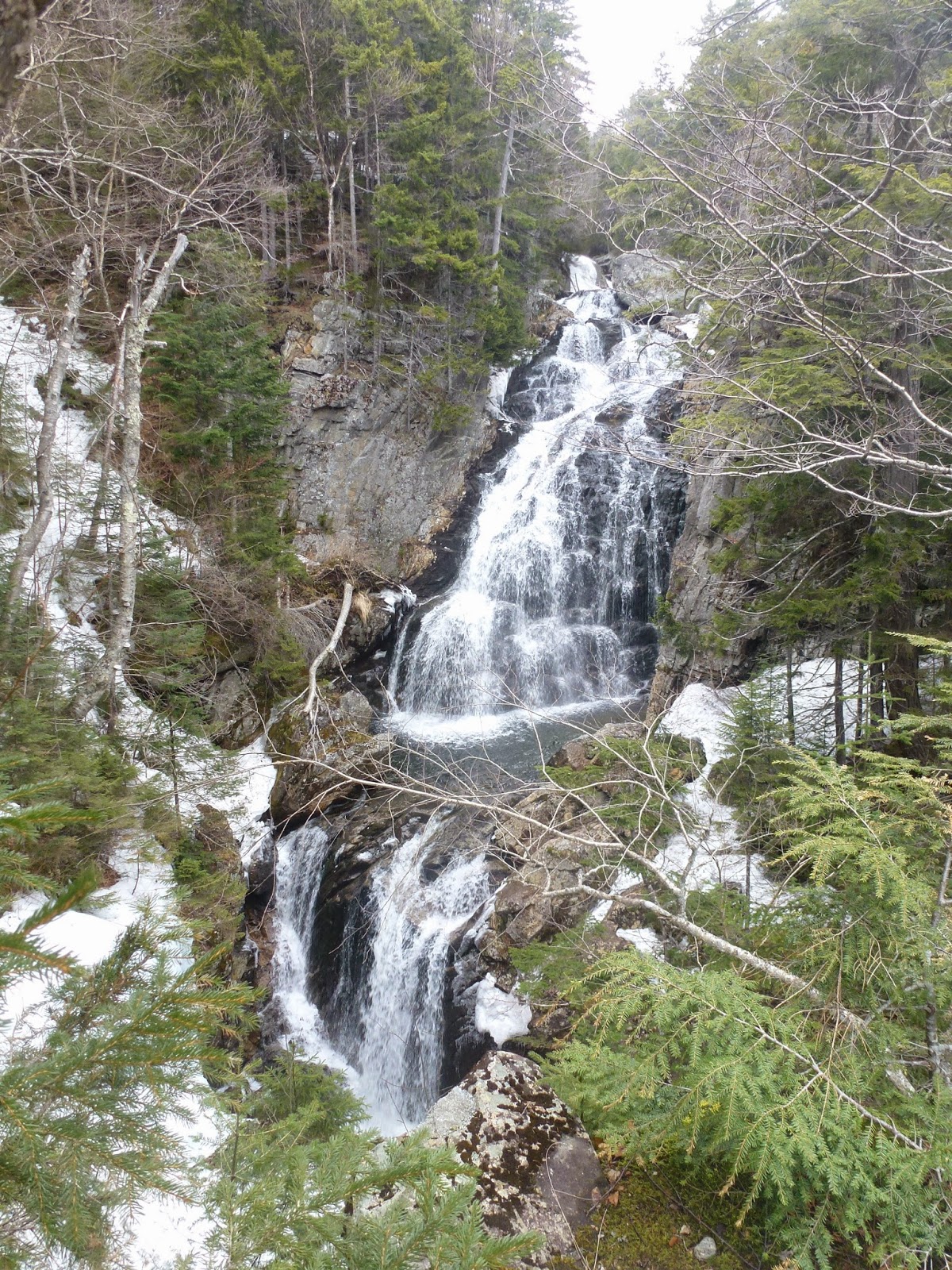 Thank you, thank you to those still reading and, as is always my goal, I hope this tale was helpful in somebody’s research in deciding where to hit the trail with their pup!  Arethusa Falls is an excellent starter or mellow hike with enough challenge to decide if a bigger hike is your or your dog’s cup of tea but keeps avid hikers equally entertained.  The blessing and curse of Tuck’s is the moderate but incessant drive up to the cabin.  I leave that to readers to decide of that is in line with their style.  Overall it worked well for us, not as many natural break points for Tango but not as much need for stops either.  It is one of the more popular hikes we’ve done in awhile, which Tango loved and allowed for a good deal of practice with our manners and socialization.  We also made great progress in developing a routine that will allow Tango to continue to hike with enthusiasm.  A brief warm-up walk/stretch, carefully timed low-dose aspirin, and a post-hike massage, focusing on the muscles favored while hiking made for a very happy boy two days in a row and that puts happy tears in my eyes! 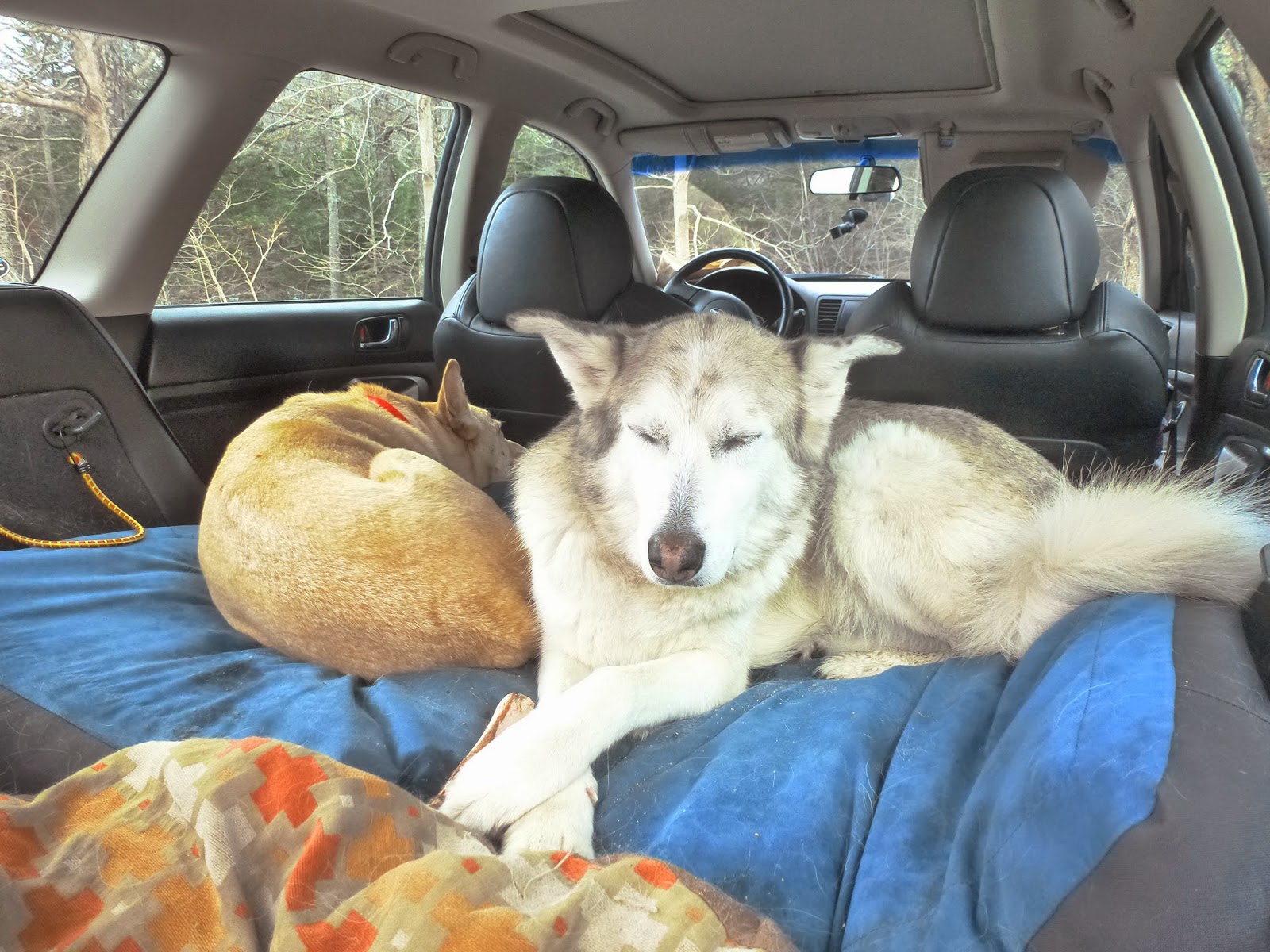