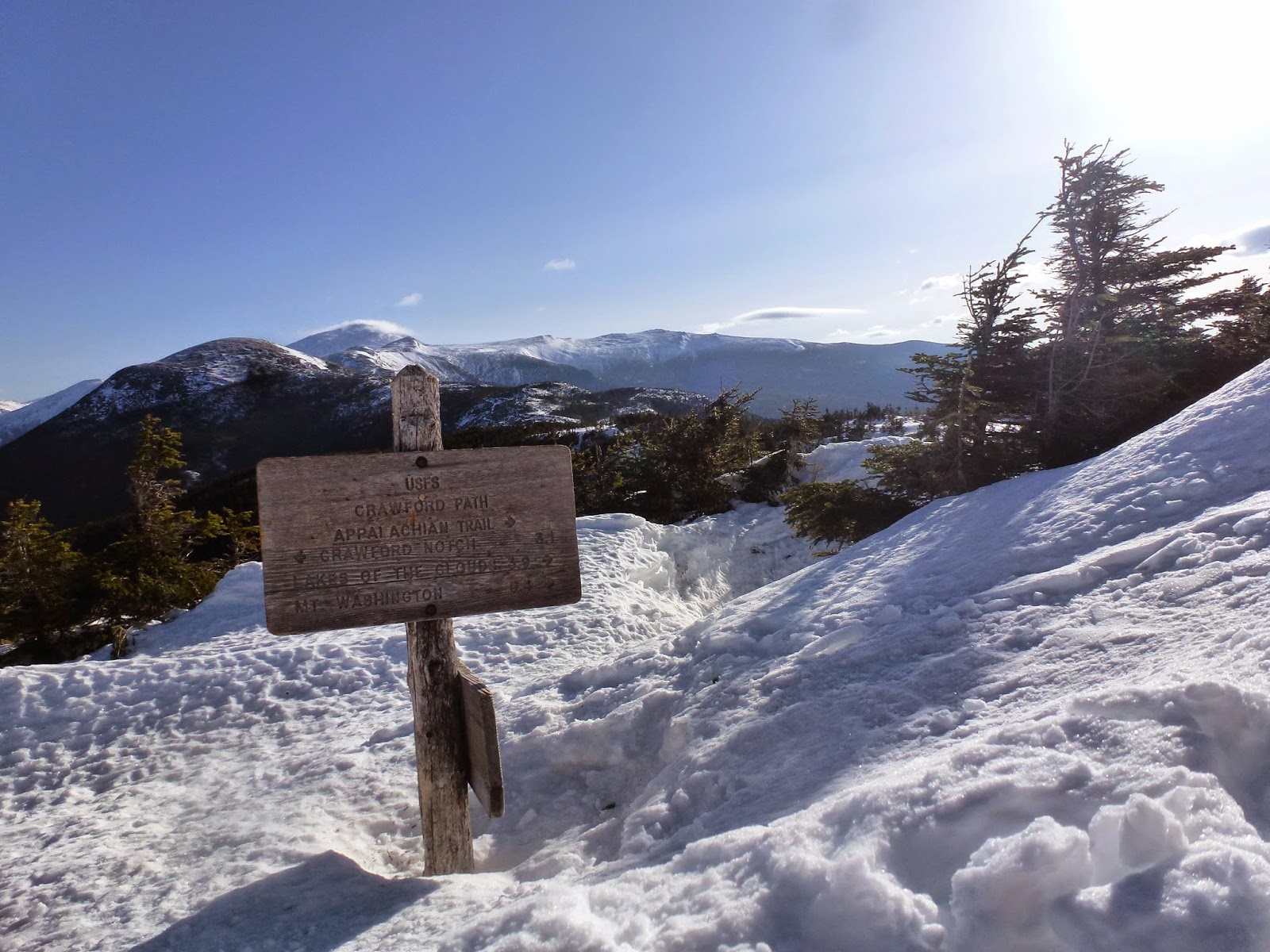 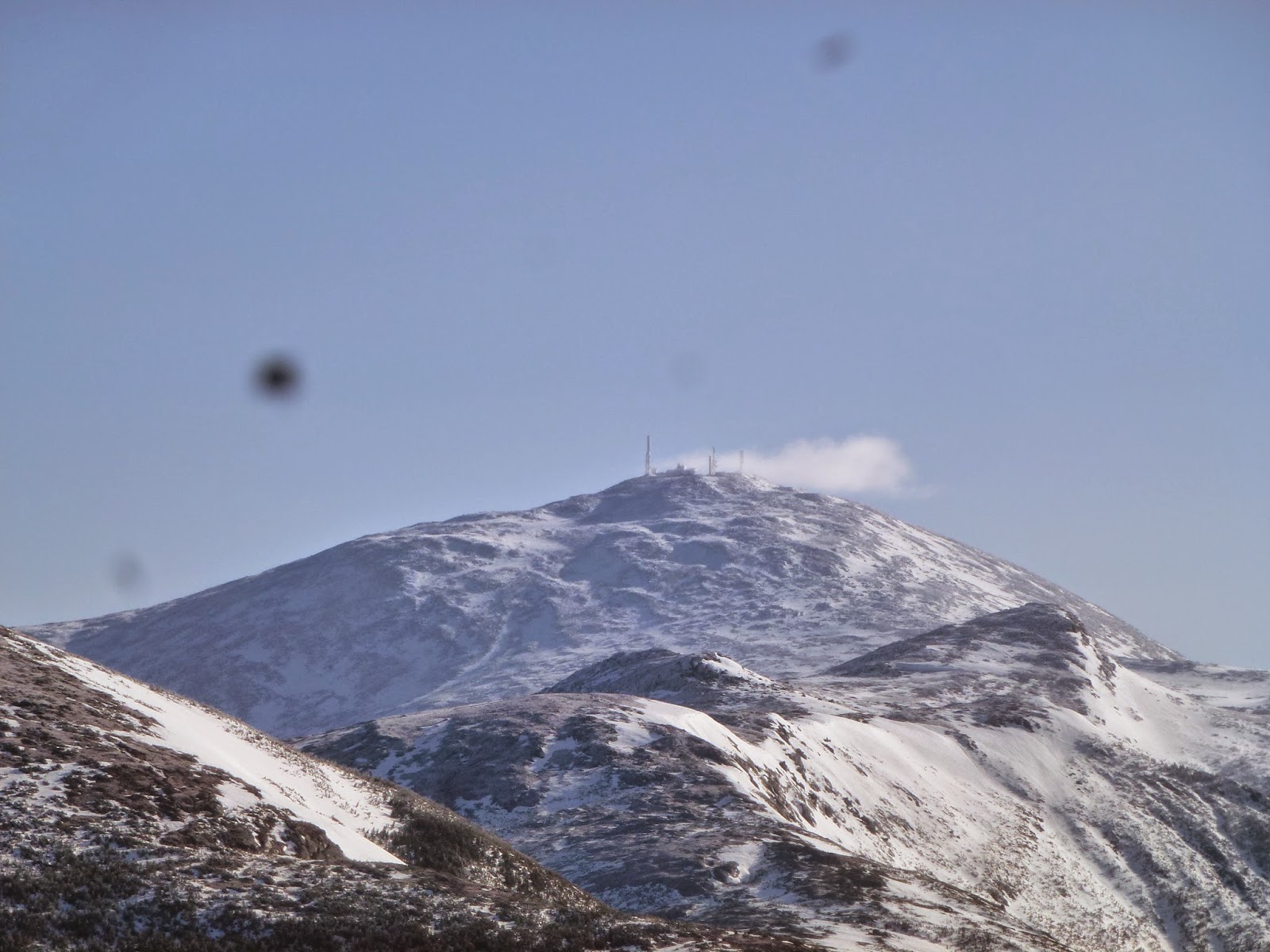 Today’s hike was my reward for completing our taxes and it also felt pretty cool we stood within sight of the location of the highest winds recorded on Earth 81 years to the day of the recording.  Watching the snow whip around and over the buildings on Mount Washington it is clear: it is a formidable peak any day.  Mountain mojo was really with us, as we had excellent trail conditions, stellar weather, and the dogs showed off their manners as we met many friendly hikers on the descent. 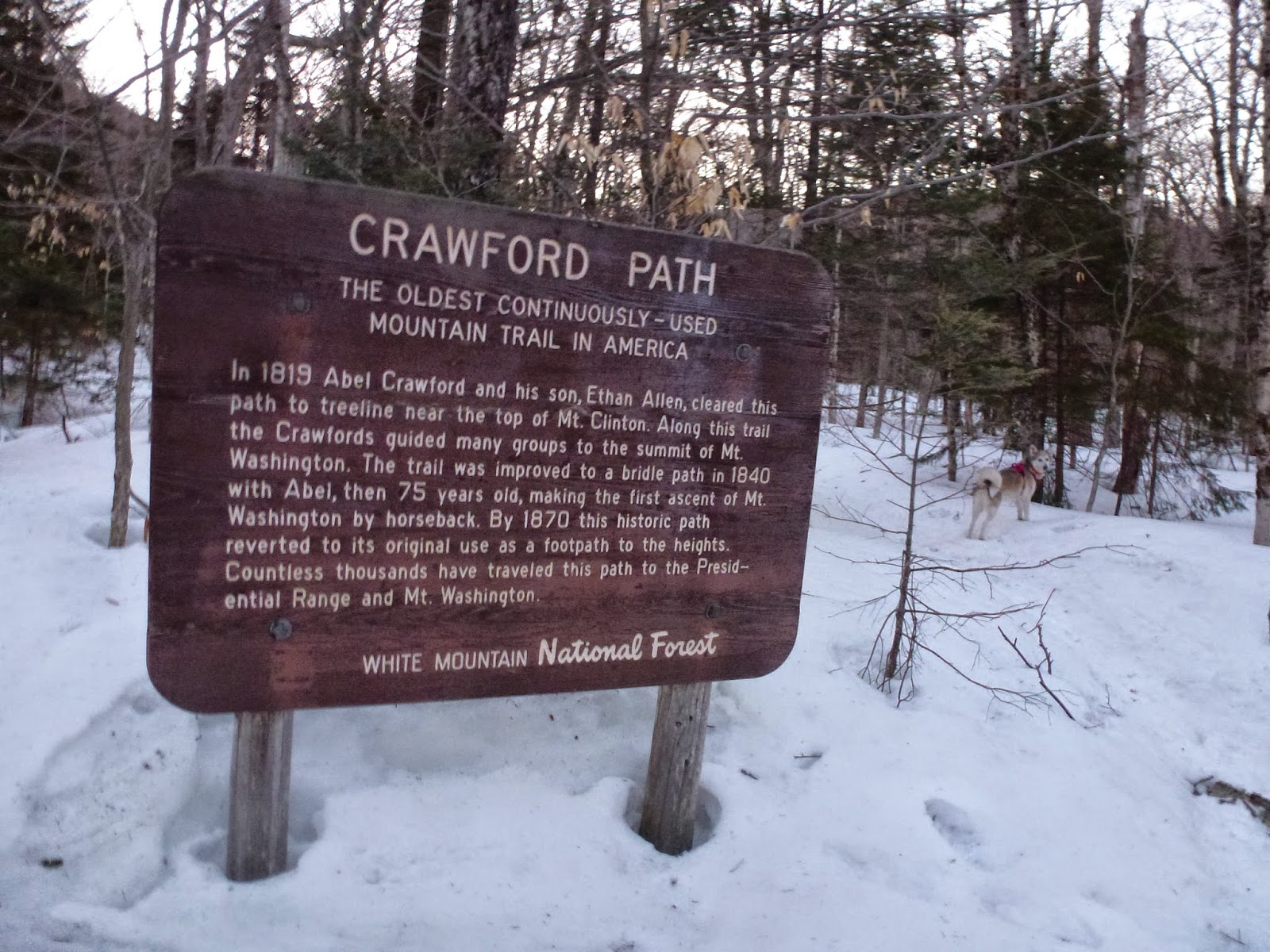 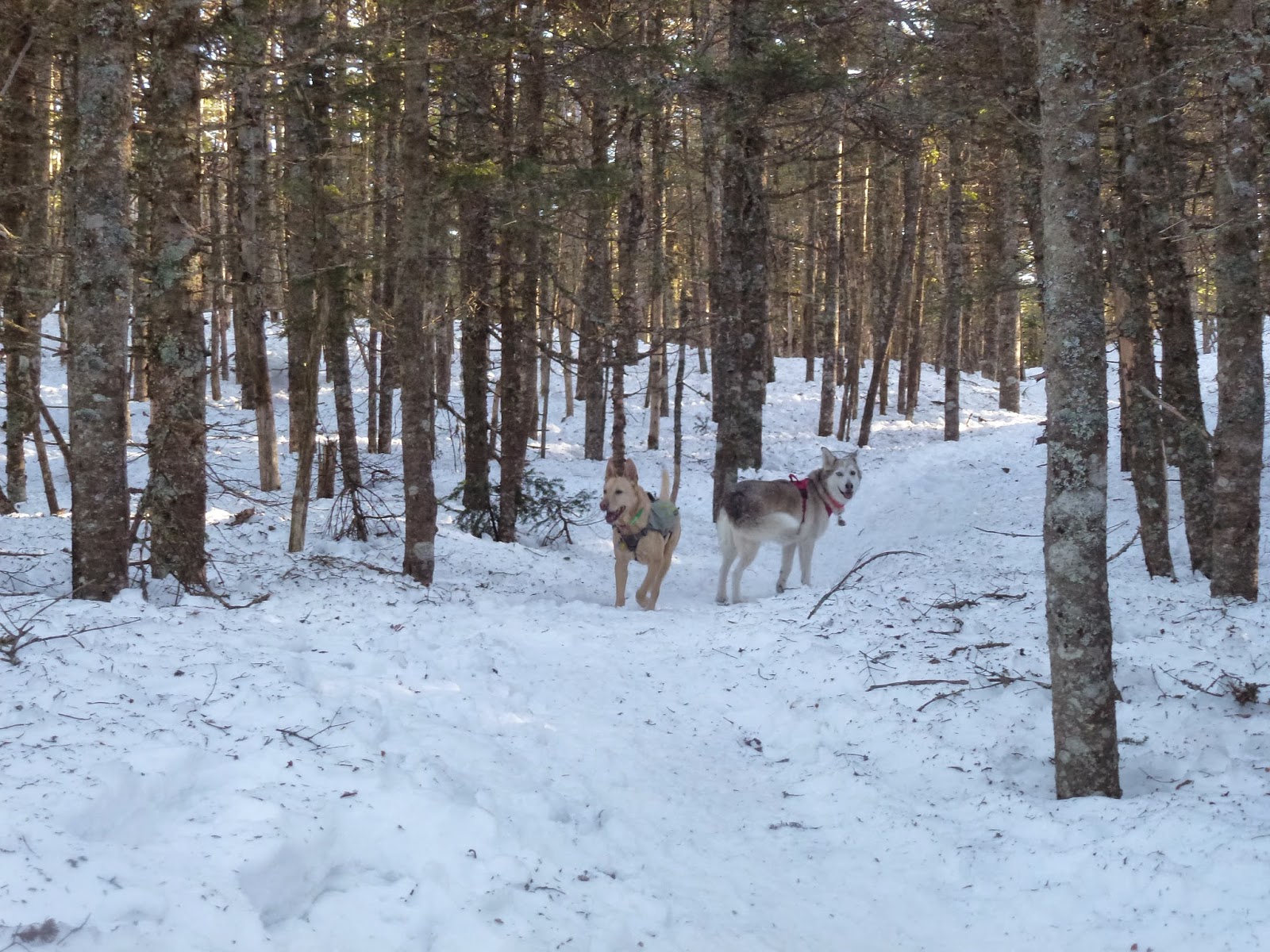 We hit the trail at sunrise, the dogs bounding ahead eagerly.  It was colder than I had expected but that played into my early start strategy.  Tango has a tougher time with the change from cold to warm weather more so than hot/summer weather itself so it was a nice transition hike for him.  Conversely, it was warm enough for me to be able to stop and fiddle with my gear without contemplating if I really need my fingers….  The trail is still very much in its winter form – hard packed snow and perfect conditions for micros (although I saw several folks in snowshoes as well).  On top of that, the trail itself, an old carriage trail, is as easy-going as a 4K footer can be.  In truth, it reminds me of Kearsarge North, which is about the same distance as well.  It alternates between moderate and gentle from the start of the Crawford Path on 302 all the way to the quick run (.1 mi) on the Webster Cliff Trail to the summit.  To be honest, I’m not sure we hit the summit but I do believe so.  The ground was flat and open (perhaps burying the giant summit cairn?) –fitting for the dogs’ summit snacks – and offered breathtaking views of the Presi’s, so it was good enough for me!  Plus the trees looked familiar from our summer ascent. (Sounds weird, I know, but sometimes a particular cluster or branch you just know!) 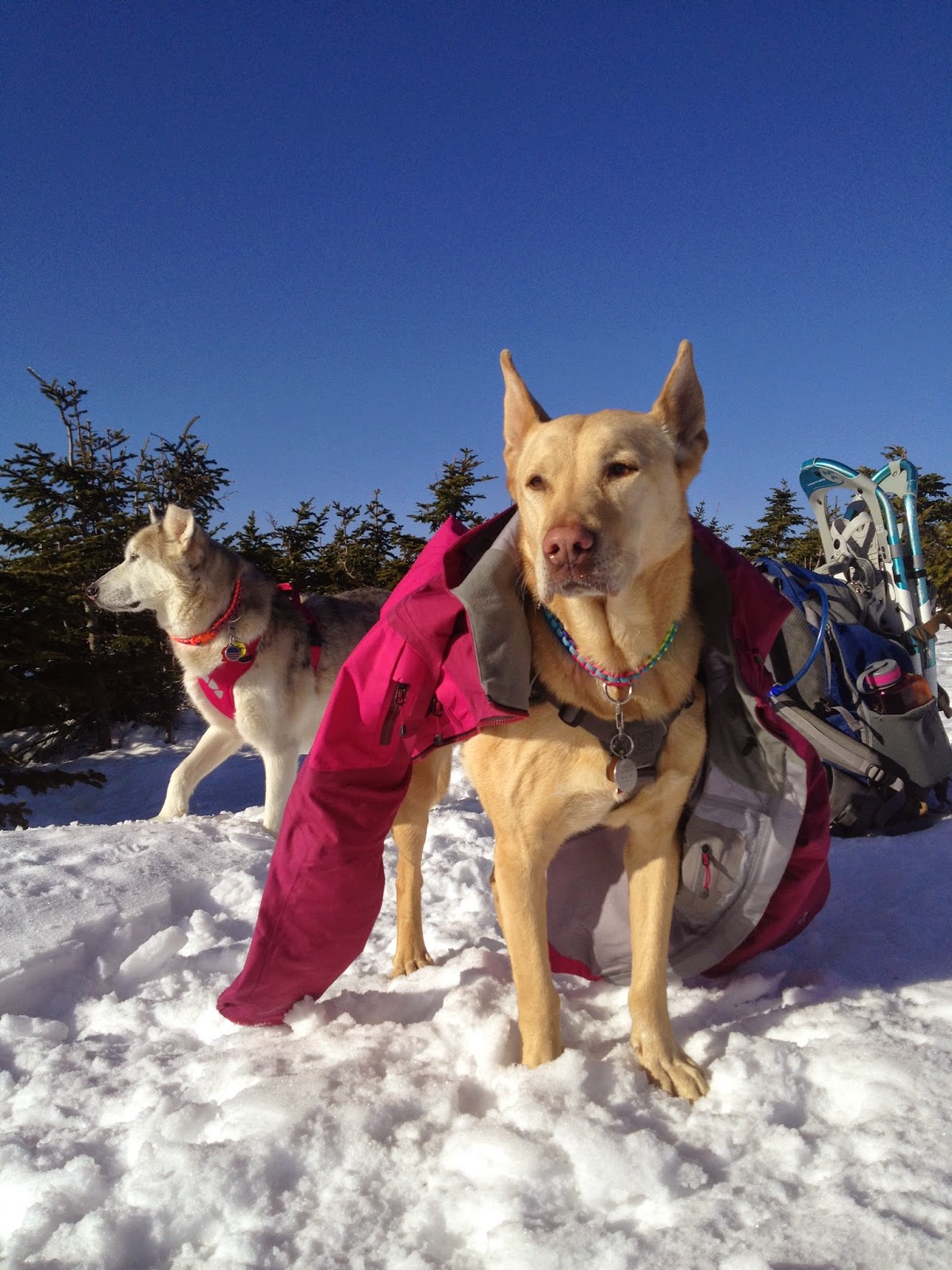 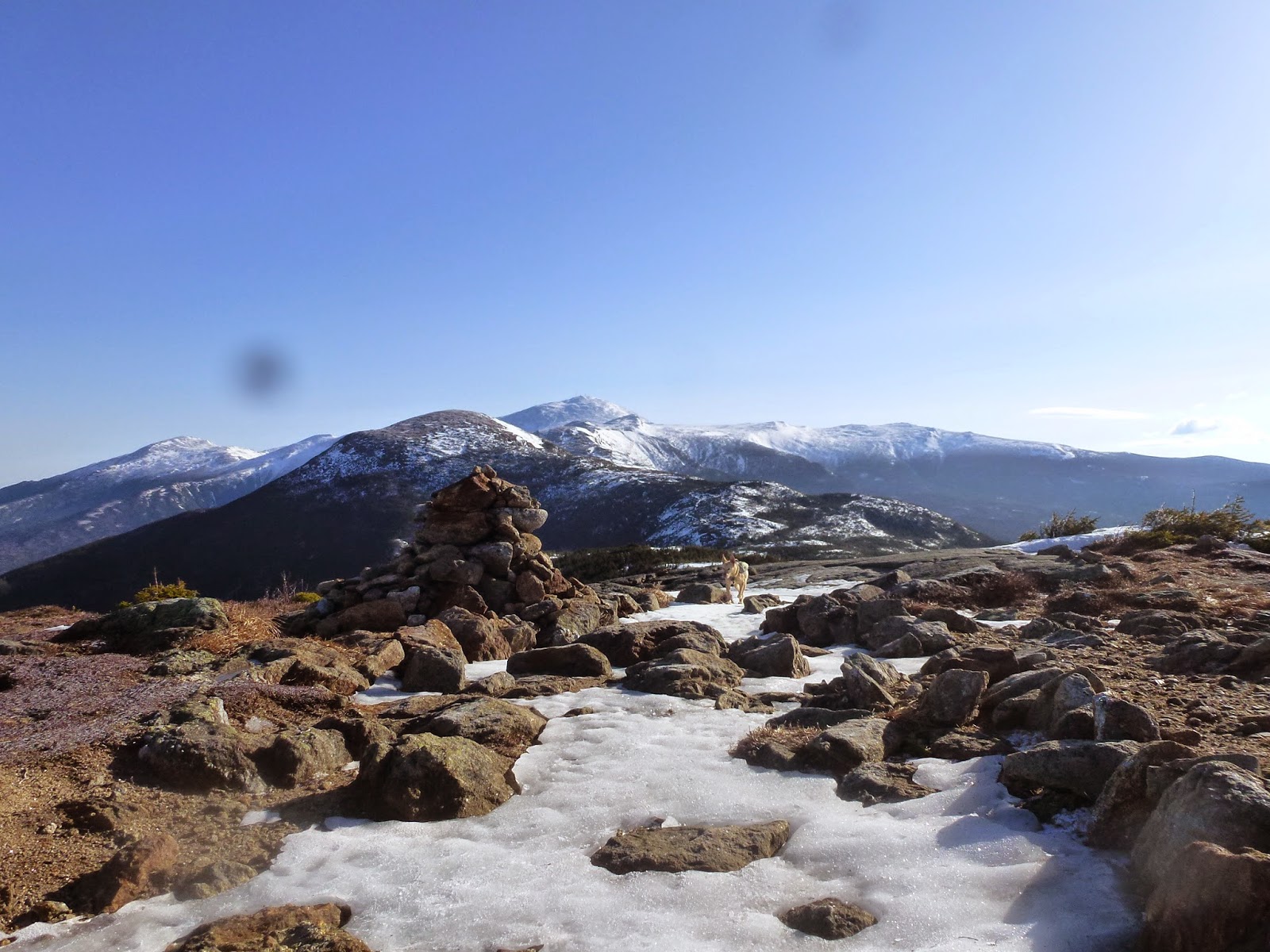 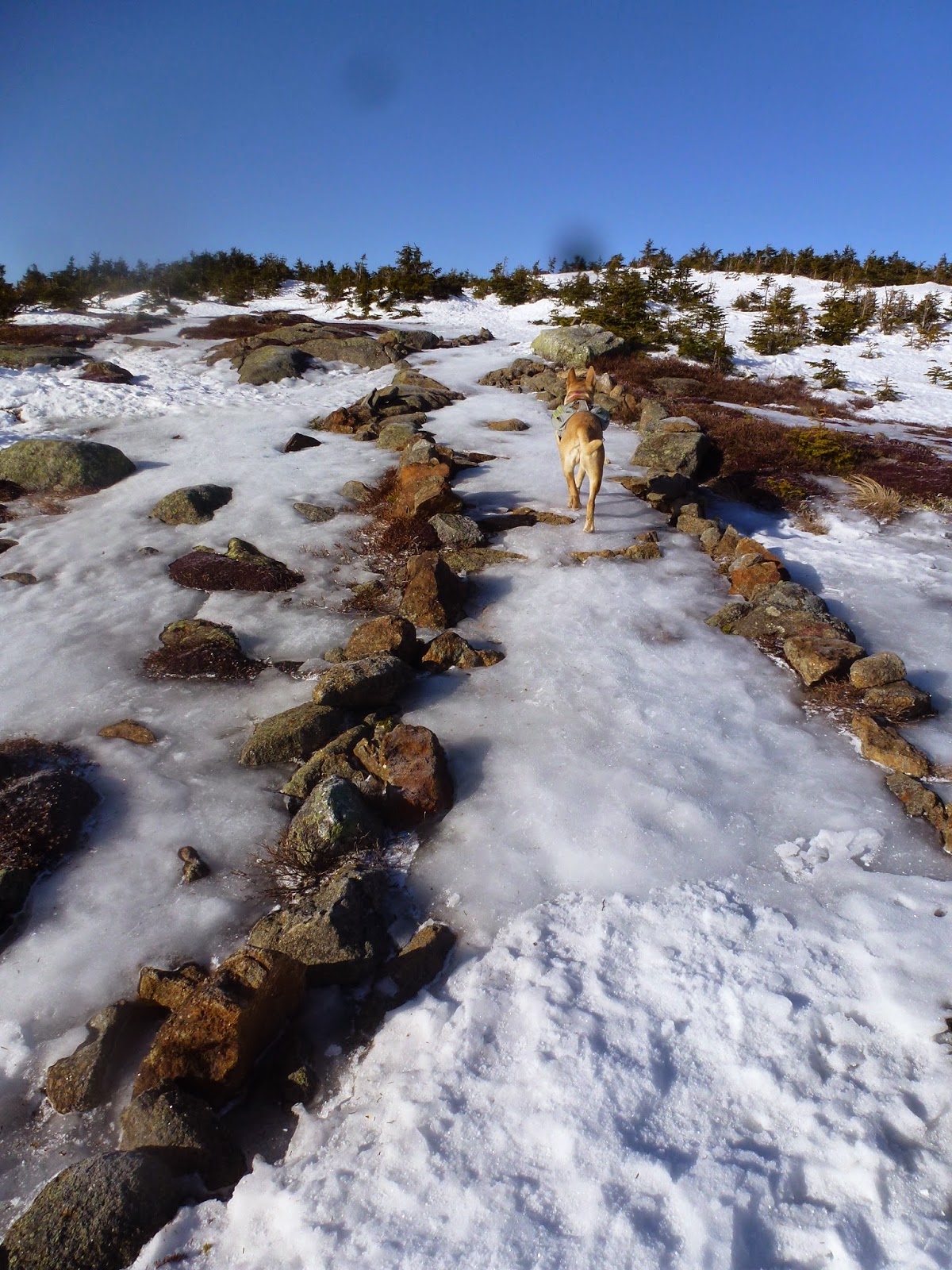 Finding the Webster Cliff Trail can be a little tricky; once one takes the right at the junction, it ascends over rock (ice) almost immediately to the right.  I had to scan the area at first but it becomes apparent quickly that the rocks are arranged in such a way to herd hikers in the right direction and soon enough we found cairns.  We were socked in the first time we reached Pierce, (which we bagged with Jackson for the Four Thousand Footers List), so it was awesome to return and see the view that is nothing short of extraordinary.

After our summit routine, we heading back the way we came.  The trail is so well packed, graded, and broad, I was tempted to join Ty in jogging down.  (another argument for winter hiking – no rocks to trip on!).  Tango was definitely off though, so I only did in spurts on occasion then waited for him.  I’ll be watching him carefully over the next few days and hikes.  He was not showing signs of physical pain, nor did he pant much til we were within earshot of the highway (when the temps really started to behave spring-like), but he was mysteriously sluggish.  Other than that, I let him pick our pace and Ty did her usual scout ahead, look back and wait for my signal, repeat.    It really is a nice walk down as well.  I cannot speak highly enough of this hike.  It is everything others have described it as – a great intro to winter 4K footer hiking, the Presi’s, above-treeline exposure, etc.  I’d call it one of the best “bang for the buck” hikes in the Whites, at least in winter when we’re taller than the scrubby summit trees!  As for its relevance to paws on peaks, we also deem it “dog friendly” for the reasons listed above and the happy pups we met while we were out!