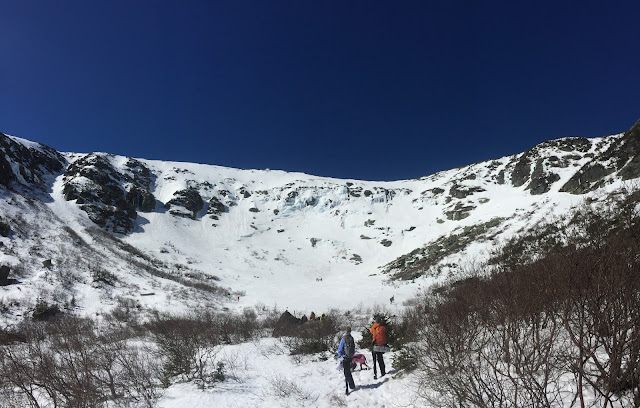 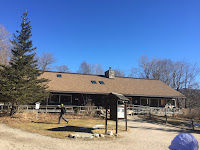 Another perfect, bluebird day and happy trail dogs as we hiked up to Lunch Rocks at the base of Tuckerman Ravine today to watch the boarders and skiers with Linda, Hannah, and Lilo.

Tuckerman Ravine Trail is a popular and oft-described hike so I will try to keep this short, sweet, and focused on conditions.  Mainly because, if I don't, it'll become a journal entry listing in excessive detail all the ways in which today was incredible! 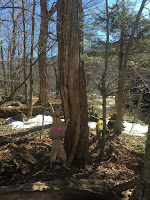 We donned traction just behind the visitor center.  While the ground was still flat, it was icy.  Ty treed some chunky chipmunks while she waited.  Through the couple switchbacks, the ground was generally crunchy but warming ice and packed snow.  In a couple spots such as near Crystal Cascade and bridge, it was more bare ground/mud. 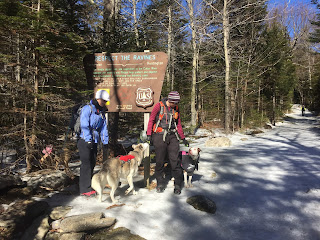 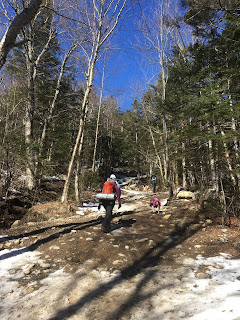 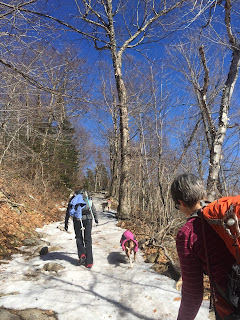 The incline then began at a sharper rate than I had recalled.  One thing I love about this trail, at least with some snow on it (we have yet to do it otherwise), is how excellent the footing is.  Smooth rocks jutted out of the snow here and there and of course I managed to step on many of them in my new-ish Trail Crampon Pros despite the trail being as wide as a Suburban. 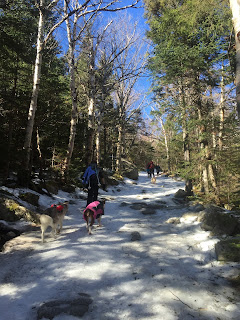 The trail was mostly hard, crunchy ice and packed snow but as the day warmed, slush became more prevalent.  All along the way, the shadows, perfect blue skies, and richness of the evergreens' needles were a wondrous gift to the eyes from the nature gods. 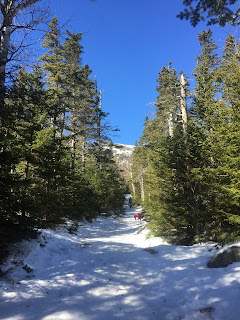 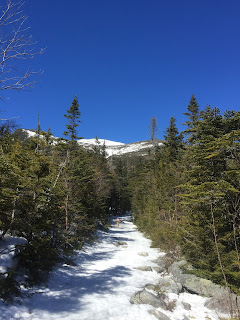 The grade eased up as we neared the bridge that crosses the Cutler River and continued at a more leisurely pace than I' remembered to the turn for the Harvard Cabin.  The grade was an easy moderate and still crunchy, packed snow/ice up to the lean to's and Hermit Lake Shelter. 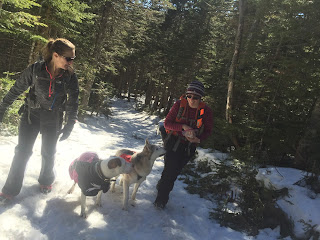 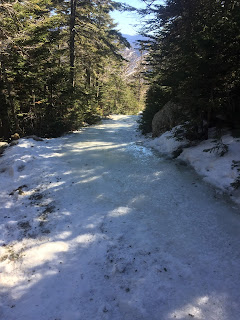 The shelter deck was quiet and after adding a layer, we pressed on for the final .7 mile to Lunch Rocks.  We passed Hermit Lake and wove through the trees on flat ground for a couple of minutes before the steep, slushy ascent began.  Micros were sufficient but poles or crampons were helpful to lessen the huffing and puffing. 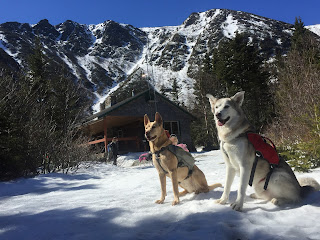 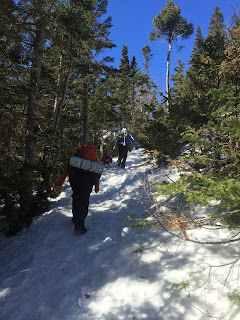 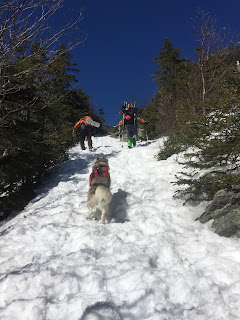 There were a few spots where it evened out briefly and with the stunning views of the ravine walls surrounding us, we made quick work of that last leg of the ascent.  As the trail flattened, the full awesomeness of the ravine was revealed.  The Rocks were claimed so we set up shop along the edge of the floor. 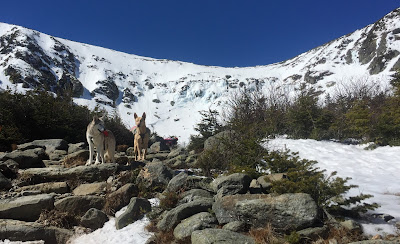 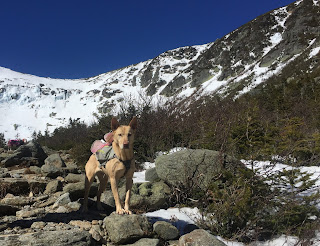 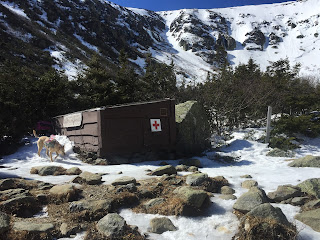 Words have escaped me for just how fun it was to hang out and watch the skiers and riders.  The temps were in the mid to upper 30's with only sporadic wind gusts and the skies remained perfectly clear.  We saw quite a few runs before Ty and Lilo had it with the wind. 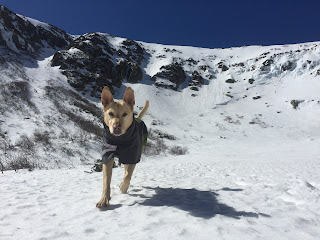 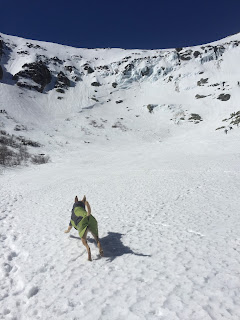 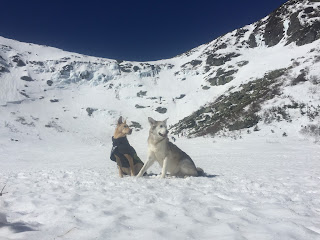 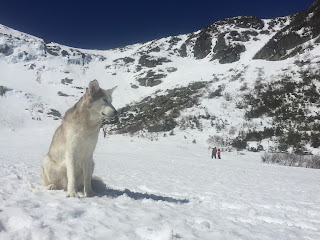 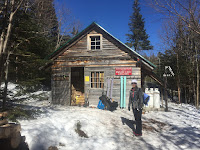 The steepest parts of the ridge down to the lake made for some fun glissading on the way back to the shelter.  There, the dogs were doted on by a group from the AMC's Youth Opportunities Program and we were especially proud pet parents and humbled that admittedly cautious members wanted to meet them.  Moving on, Linda and I made a quick detour to see the Harvard Cabin (add .6 mile total) but were too lazy to undo our traction to go inside.  Hannah and Lilo had another engagement near home and headed down ahead of us.  Shortly after returning to the Tucks Trail we made a new friend, Kelley, who we lent our spare pair of microspikes to.  In return, she kicked up our pace and we made great time back to the trailhead, where we basked in the sun before departing. 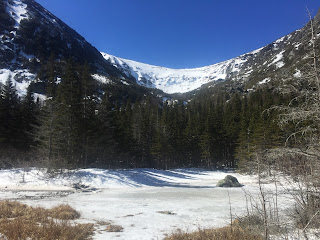 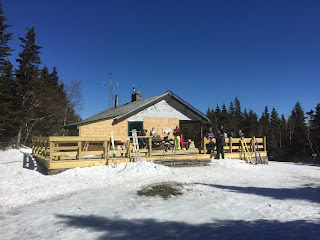 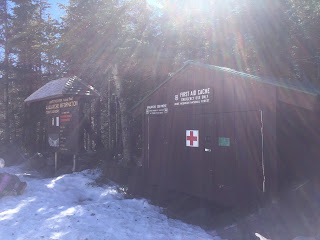 Today's hike earned a perfect paw-friendliness rating.  The weather was in our favor in every way.  While Ty isn't overly fond of violent-sounding wind, it was intermittent and she coped.  The snow and ice underfoot complemented the warm air for Tango and helped keep him relatively comfortable.  It's only our second time taking this trip but both times, the upbeat energy and welcoming nature of others was palpable.  In regards to drinking water, there wasn't too much drinkable runoff and the river itself was very strong and not accessible but they hardly needed water anyhow.  The trip falls perfectly in my "moderate" category and it can be a quick hike or one can easily make a day of it watching the skiers and boarders.  My only woe is the fuzzy quality of some otherwise special photos due to moisture on the lens (as the country song goes, "I've got nobody to blame but me.").  But with that being my only "complaint," it was a stellar day for all. 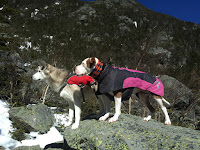 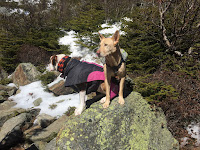 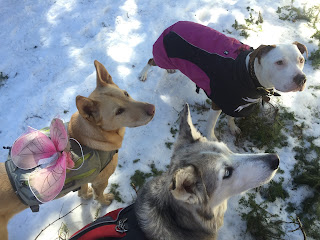 For more details about the trail, you can check out my post from our last visit here.
Posted by pawsonpeaks at 11:54:00 PM