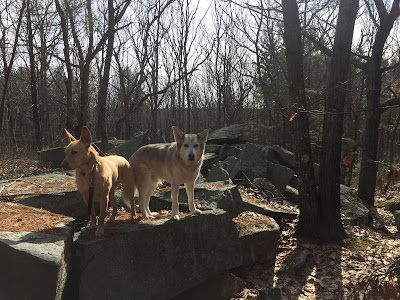 Never did I think I would ever say I got lost in the woods off Pool Street in Biddeford!  But that's just what happened on Sunday and I'm a happier person for it. 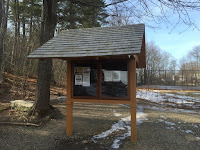 Clifford Park has about 5 miles total of marked trails (I read that somewhere) for walking, running, snowshoeing, cross country skiing, and cycling.  I had seen and heard of it but it took over year for us to finally check it out.  Some of the talk about town wasn't all good and I was happy to see an empty parking lot and be accompanied by three dogs when we arrived.

After a dicey few steps between the lot and trailhead, we were welcomed by a beautiful, dry, broad trail through open woods and I was instantly in love.  We started with the main loop, identified by black blazes and totaled 1.3 miles.  The trail was generally very spacious.  Only a few spots had standing water or ice (and the accompanying mud).  What I instantly loved about these woods were the rocks.  How were there so many random boulder deposits?!  A couple were graffiti-ed and I could understand why there have been issues there in the past (more of our interesting finds later) but I felt very safe and peaceful.

Upon finishing the black trail loop, we ran into a family with their small dog and decided to head toward's the park's height of land via the green trail, as it looked potentially rocky and I was bumming we weren't on Cabot with our friends as initially planned.  I'm not so great at  reading maps but I could not figure out the green trail.  For example, I would be at a three-way intersection with green blazes in all directions but the map never indicated such a location.  I gave up after a few minutes and followed an unmarked and subtle trail heading upwards.  At the top were rocky outcroppings and was essentially a clearing (sparse trees).  Of course, being one of the coolest locales in the park, there was lots of evidence of illicit activity like fires and drinking.  Be Aware: there is a lot of broken glass.  At the other side of the clearing, we picked up the pink trail which brought us back to the green then black trail.

Instead of staying on the interior of the loop, I waited for the second (and final) chance to take the red trail and veered left at the opportunity (when heading clockwise).  The red trail was a little narrower and more rugged but still well within the bounds of what I call "Mass State Parks terrain."  Before long I could hear running water and when the trail took a sharp right, we skidded down the hill and found a small cascade and another awesome hangout spot... again, if it weren't for all the glass.  It's such a bummer to find an awesome place and simultaneously discover it's trashed in the coolest spots.  The trails themselves were, by and large, very clean.  We hopped back on the red trail and enjoyed the meander along the brook (West Brook if I'm not mistaken).
The red trail ran into the orange and continued to provide an enjoyable and easy walk, albeit on a narrower trail than previously.  Some ice remained and we had to skirt around it, sometimes meaning I was dragged between saplings!  My original plan was to take the longest option available back to the car via the yellow and blue trails.  The intersection where the yellow should have been had no markers.  We took it anyway and got lost.  I'm not a fan of getting lost.  We reached where the hill we were traversing dropped into a neighborhood and turned around. Back at the junction, we turned onto the blue trail (opting for the longer stretch since it was unevenly bisected).

The blue trail was pretty cool and reminded me of our small handful of walks in the Blue Hills of Mass (with less elevation change).  The blue trail took us through some younger woods and skirted a marshy area.  I loved walking over the smooth rock for a short stretch before coming to another intersection with two arrows that pointed right.  (to the left were folks' backyards and what are probably their personal trails).  Shortly beyond the righthand turn, I saw what I think was the other end of the yellow trail but a half-hearted attempt to follow it wasn't any more successful than trying to follow the other end.  We walked up the hill and Tango led us along a narrow footpath that dropped down into what looked like an old quarry.  He led us to the end and we turned back and hopped back on the blue.

Moments later we encountered a couple of off leash dogs.  I fully admit (as it is obvious by the photos) that I had Tango off leash (more for my safety than anything else considering the fact that we were essentially alone and he is crazy good off leash, though he certainly loved to lead knowing the girls couldn't).  It appears the park does have some off leash areas so I will look more into that.  I hope to run into some regulars sooner rather than later to accelerate my knowledge of the area and maybe have some walking buddies.

I am so glad (and slightly regretful it took so long) we visited Clifford Park.  The official trails are very well marked (my confusion about the green and yellow ones aside) and there are many unmarked ones as well if you're feeling confident.  We easily spent two hours or so exploring; Clifford Park is great for short walks just enough to get off the pavement or a worthy substitute for a hike (sort of!). I did a little "googling" and confirmed my hunch about the scattered rocks and large, curved drop off on the blue trail - the land was once home to several quarries according to this article.
A trail map can be found here.

We went back to Clifford Park yesterday and I followed the dogs aimlessly.  They loved the small waterfall and Ty was intent on getting up the embankment on the other side but there are houses at the top.  There were about eight cars in the lot but we never directly crossed paths with anyone for the full hour and a half we were there.

Our wanderings put us on the green trail for awhile (the one I could not figure out last week) and it is actually quite long and more rugged than the others.  I will try to get there by following the blazed trails next time to provide directions.  There were some really cool sights like a tiny cave that Ty found.  We also passed another illegally created (and largest observed thus far) lean-to.

We revisited the top of the quarry site (I believe) near the northern junction of the yellow and blue trails and spent some time practicing the dogs' bouldering skills.  I never expected that to be possible to close to home!

Finally, here's a link to the official leash rules for the park.  I'd rather provide it directly from the town than repeat second-hand information.
Posted by pawsonpeaks at 8:22:00 PM