Two weeks away from the mountains has not meant two weeks without outings.  Last weekend Erick agreed to go somewhere new with us and we were lucky enough to also be sort of near Hannah's neck of the woods so she joined us for our first (overdue) visit to Pawtuckaway State Park in Nottingham, NH. 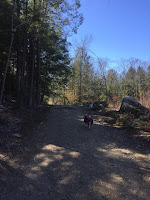 Based on a suggestion from a Facebook friend, we parked at the end of Round Pond Road.  Despite what the GPS says, it does not go through the park; there is a gate and if it directs you there via Reservation Road, it is leading you astray).  It was so busy, we had to park in the overflow area a little ways back towards the main road.  One of the reasons I wanted to go to Pawtuckaway was the ability to let the dogs off leash so as soon as we passed the gate, we released the hounds!

Frankly, I believe I am writing a report simply because it has been awhile since my last post because, despite having a loose plan to go up North Mountain via the Boulder Trail, we mostly wandered so I have very little helpful input for info-seekers. 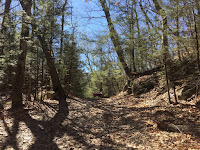 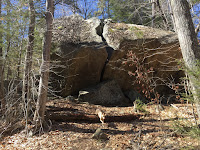 The main trail we began on was perfect for a stroll: packed dirt and wide with no obstacles.  After skirting around Round Pond, we crossed a small stream the bore right at the first noticeable intersection (left indicated it was for the Round Pond Bypass).

While the tree cover transformed into shade-forming evergreens, the trail continued with its easy, meandering style.  I mentally rejoiced at finding a place that engaged Erick, not typically a hiking guy.  All the while, Tango was upbeat and Ty was a joyful mix of her critter-chasing self, a perfect listener, and a new brand of puppy-like I don't think I've ever seen in her. 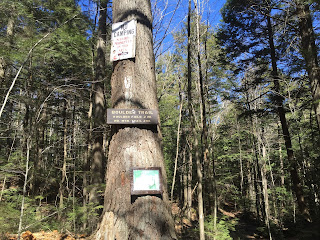 The trail descended after a few minutes and turned left to avoid one of the first massive boulders (glacial deposits, I believe) where there was an American Bulldog accompanying his boulder-climbing owner.  To the right and out of range of the bulldog were more massive boulders and I wandered off trail for photos ops and gawking.

It would be awhile before we rejoined a trail because those rocks were super cool, which led me to other interesting rocks which led us down the hill to the swampy edge of one of the ponds.  Sitting on a shoulder-high rock, we watched Ty be the swamp thing for a long time while enjoying the sunshine and observing her in her "natural habitat" (Carolina Dogs are native to swampy areas in the south).

Can you spot her? 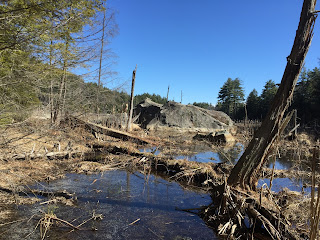 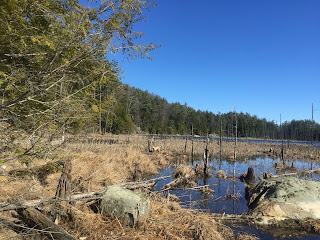 Awhile later, we made our way back up to a trail.  "A" trail because we didn't hop back on where we departed from.  This trail (perhaps the same one as before for all I know) followed the pond at a distance. 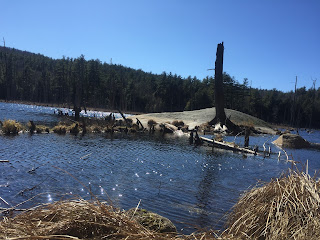 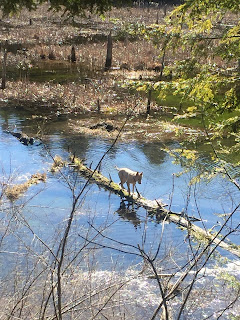 This trail had a little light scrambling that added some extra fun and entertainment because Ty was absolutely in heaven.  She would disappear up into the rocks and mysteriously reappear in the woods ahead of us.  It was at that point I realized how massive the park is.  So many cars in the lot but we hadn't encountered hoards of people.  Quite a few, but not a quantity difficult to manage with off leash dogs.  Many of them were there to climb/boulder. 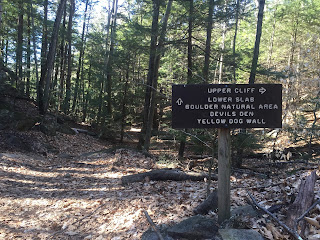 The trail we followed from the pond was narrower and more typical of a wooded path with some small obstacles (photos above).  We passed an intersection or two, all with promises of more boulders to marvel at and climb up, but we stayed the course and eventually landed back on the trail we started on that led back to the car. 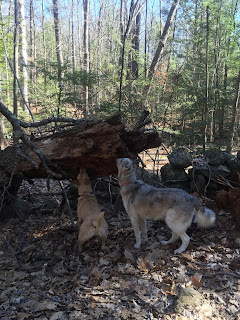 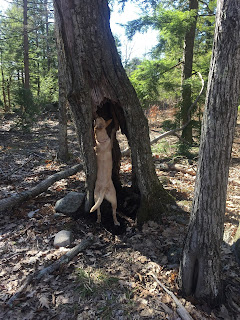 We easily spent an awesome 2.5 hours wandering around and barely covered a small corner of the park.  It is massive and diverse; I cannot wait to bring the dogs back.  It is a park where anyone with a remote interest in being outdoors can have fun. Many of the trails are wide enough to walk side by side, enabling conversation in a way many of the mountain trails don't.  The boulders are fascinating and fun.  Even Tango enjoyed them and had my back when I scrambled up a steep hill that was more challenging than I had anticipated to get down from.  (Erick had to help and it's a wonder he's allowing me out again!)  My understanding is that the lake at the other end of the park allows canoeing but we enjoyed sitting on the pond's banks and taking in the experience.  And the woods are simply enchanting.  Despite the large number of park-goers, we saw bear scat right on the trail!  With the variety of interests between the six of us, everyone was a happy hiker; we wholeheartedly recommend this park to everyone! Hopefully we'll have a tale of paws on peaks in the near future but if not, expect some more local reports!

Click here for Pawtuckaway's website.  Scroll down for the pet-related rules.
Click here for the official map (which I managed to struggle with and wish had more description to match trail signs)
Posted by pawsonpeaks at 11:32:00 AM